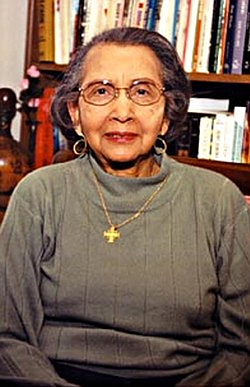 Amid the illustrious women listed on the cover of Haki Madhubuti’s book “Taught by Women” is Naomi Long Madgett. Cited randomly between Assata Shakur and Audre Lorde, Madgett may not have had their national recognition, but in Detroit she was the poet laureate and nurtured, mentored, and provided a platform for numerous writers, including Madhubuti. Madgett, 92, joined the ancestors Friday, Nov. 6, in Detroit where began endless choruses of tributes to her remarkable life.

Many poets and authors had long before noted her prominence and significance. “She was a professor, ran a publishing company [Lotus Press], and wrote poetry steeped in ancestor worship and love of self, was political without being polemic, and personal without picking at scabs,” author Bill Harris wrote in the Kresge eminent artist booklet honoring her in 2012. One of the poets she published was Paulette Childress, who in the Kresge booklet, recalled that “Naomi became not only my mentor, she also became my dear friend and confidante, the master teacher who would as gently correct my grammar as encourage my hopes of attaining higher education. In ‘Woman with Flower,’ she observes ‘The leaf is inclined to find its own direction.’ She mentored accordingly.”

In a lengthy interview with TheHistoryMakers.org, Madgett disclosed portions of her impressive odyssey that began July 5, 1923 in Norfolk, Virginia. Her father was the Rev. Clarence Marcellus Long and her mother the former Maude Selena Hilton. “…I have walked through my own shadows, and like you transcended glitter,” Madgett wrote in “Reluctant Light,” a poem dedicated to her mother. “I have learned that I am source and substance of a different kind of light.” This poetic urgency, she said, blossomed when she was 12 when her poem “My Choice” was published on the youth page of the Orange Daily Courier. Three years later, while living with her family in St. Louis, Missouri, she established a friendship with Langston Hughes.

She was a graduate of Charles Sumner High School in 1941, the same year her first book of poetry “Songs to a Phantom Nightingale” was published. During World War II she was a student at Virginia State University and graduated with a B.A. degree in 1945. “I attended graduate school at New York University,” she told TheHistoryMakers.org, “and in 1946 I married and moved to Detroit where I worked as a copywriter for the Michigan Chronicle. I was also employed at Michigan Bell.”

According to the Poetry Foundation, Madgett joined a group of African American writers in Detroit, most notably Dudley Randall, the founder of Broadside Press, which is now combined with Lotus Press. Her poem “Refugee” appeared in “The Poetry of the Negro 1746-1949” and a year later, several of her poems were featured in “American Literature by Negro Authors.” By 1955, she had earned her master’s in education from Wayne State University and began teaching at Northwestern High School. (I almost took her class.) Meanwhile, her writing accelerated with such books as “One and the Many” and “Star by Star” in 1965.

Her relationship with Hughes was commemorated with her inclusion in his anthology “New Negro Poets: USA” (1964). A year later she was a recipient of the Mott Fellowship in English. She has been included in a number of anthologies, and she even composed “A Student’s Guide to Creative Writing” at Eastern Michigan University where she was a faculty member. In 2001, Mayor Dennis Archer appointed her as the city’s poet laureate.

In one of her latest poems, “Connected Islands,” the closing stanza restates her concern about bonding and the necessary ties between people. “Even separate islands are connected by some sea and we are sisters touching across the waters/of our disparate lives, singing our untold stories in a harmony of undulating waves.”

The currents of her influence and inspiration continue to resonate through the thousands she touched with her insights and vision, and certainly the vibration of her words and thoughts have been harvested in the dreams and expressions of the several poets who have won the Naomi Long Madgett Poetry Award. “I have loved you all these years without condition of return,” she wrote in one of her memorable poems. And now we unconditionally return that love.