Police under Biden: Reform or remain? 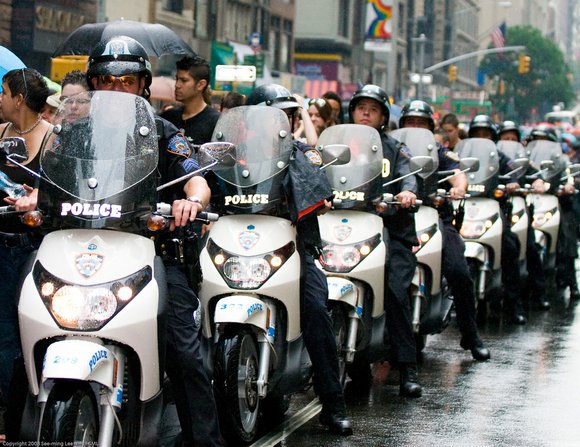 The year 2020 was a year of pandemics and protests. The latter involved clashes with police over police brutality. Police reform is on the list of President-Elect Joe Biden and Vice President-Elect Kamala Harris’ agenda.

But fixing relations between officers and the communities they serve could prove to be a difficult task.

Nick Encalada-Malinowski, civil rights campaign director for VOCAL-NY, said that while local law enforcement’s actions in 2020 aren’t surprising, the department running the opposite of the city politically is still troubling.

“Police unions’ endorsement of Trump, and his white supremacist policies, was disturbing but unsurprising,” Encalada-Malinkowski said. “However, the violence and racism of the NYPD didn’t start in 2016 and Mayor Bill de Blasio, a Democrat, has given more power and resources and demanded less transparency and accountability from the NYPD than any other mayor in recent memory.

“In terms of policing in New York City, the next mayoral election is more consequential than the recent presidential one, but Biden could be helpful by creating funding incentives for states and municipalities to divest from policing,” continued Encalada-Malinkowski.

Director of Public Relations and Political Affairs with the Black Law Enforcement Alliance Marq Claxton is on the same page. Claxton is a retired NYPD detective and currently a law enforcement analyst. He said that the majority of New Yorkers don’t share the Police Benevolent Association’s views on policing and it will hurt everyone in the long run.

“I think once the public becomes more aware that the PBA assumes a position opposite their views and desires that it would just exacerbate the tensions between many in the community and the police department. The PBA’s endorsements of politicians over the past several months have been exclusively Republican. That’s peculiar when you’re trying to get a [union] contract in New York City, which is a Democratic city.”

The AmNews contacted the Police Benevolent Association for comment, but didn’t get a response. However, PBA President Pat Lynch didn’t acknowledge Joe Biden’s presidential election win, but did acknowledge Republicans picking up House seats…with some shots at Democrats.

“While we wait for every valid ballot to be counted, it is already clear that New Yorkers have rejected the anti-police, anti-public safety extremism of the Democratic Party’s radical wing,” said Lynch. “They’ve had enough of putting criminals first and crime victims last. They are sick of seeing their police officers abused and undermined. Any Democrat who is disappointed in these results needs to face a hard truth: they won’t win back regular New Yorkers until they kick out the cop-haters and anarchists who have hijacked the party.”

New York is a heavily Democratic city that overwhelmingly voted for President-Elect Joe Biden except for Staten Island, where more than 61% of residents voted for Trump. Queens cast the second most votes for Trump among the five boroughs at 30%. In Forest Hills, 70% of voters picked Hillary Clinton in the 2016 presidential election. This time around, the neighborhood went 65% for Trump.

But much of the community, in particular the Black and Brown communities, have a different view of police with George Floyd, Breonna Taylor, Eric Garner and others becoming household names after being victims of police murder.

Taryn Merkl, of the Brennan Center for Justice at New York University, said that one of the major elements of police reform should be limiting what’s considered to be accepted physical actions against suspects. She recommends that the federal government take the lead and beef up certification and training for police officers.

“The Biden administration, really any presidential administration, in light of what we’ve seen this past summer, should put strict limits on permissible use of force. Ban certain techniques like chokeholds and use of weapons not necessary for preserving public safety.”

Claxton agreed. He also challenged policy that protects government officials from accusations of violating a plaintiff’s rights and instead only allows suits where there is a “clearly established” violation of statutory or constitutional rights.

“Best case scenario is there will be clear and well-defined national standards,” said Claxton. “Clear federal regulations that govern and guide policing, but it’s gotta be sensible. You can’t expect or even want a swoop overhaul of policy.

“We have to increase civil liability of law enforcement and qualified immunity,” Claxton concluded.