Airline employees get engaged on tarmac 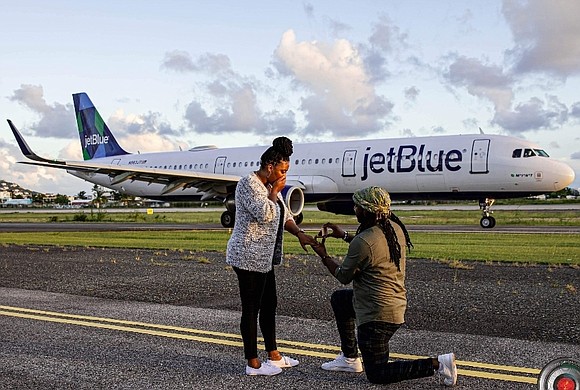 Photographer Osmond Gibson is becoming known for grand gestures. First on Sunday, June 14, he took the aerial shot of the Bed Stuy “Black Lives Matter” mural (from Fulton Street between Marcy Avenue ), which the Amsterdam News used for a special wrap cover.

Then on Saturday, Nov. 14, he proposed to his now fiancee, fellow JetBlue flight attendant Khadisha Alie, on the tarmac at Princess Juliana International Airport in St. Maarten.

“I don’t know where to begin. This was an entire year of planning,” a jubilant Gibson said after he got his yes. “Can you believe this was plan B? Plan A couldn’t work due to COVID—a special concert proposal. I had to make this proposal very special and unique. I couldn’t do the average. I thought about everything you can imagine. Then, I said, ‘Why not do it where she was born? Better yet…do it in the airport with a JetBlue plane in the background.’ I made a few calls, sent tons of emails. I added a piece of one of the poems I wrote when I was 17 titled ‘Till That Day.’ Keeping this a secret from her was so difficult because she figures out everything. I’m just happy it wasn’t leaked, although it almost did, thanks to her mom, aunt and my mother.”