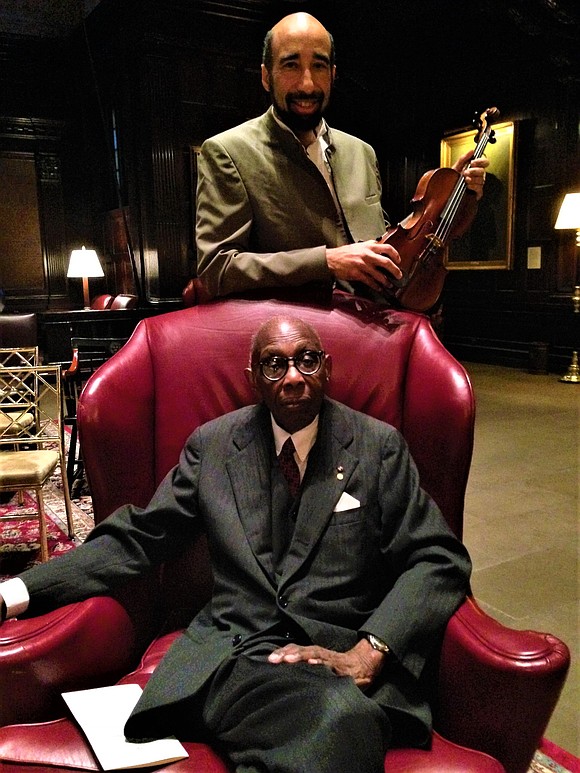 In the documentary Quincy, about the life of legendary music producer Quincy Jones, we learn that Jones studied with Nadia Boulanger, considered one of the best classical music instructors in the world. Jones wanted to be a classical composer but went on to become a leading jazz composer and R&B producer instead.

Classical music critic Alex Ross in a recent The New Yorker article wrote, “Will Marion Cook, Fletcher Henderson, Billy Strayhorn, and Nina Simone, among many others, had initially devoted themselves to classical-music studies. That jazz came to be called ‘America’s classical music’ was an indirect commentary on the whiteness of the concert world.”

It’s clear that racism undoubtedly had a hand in steering some classical music aspirants away from the discipline.

The fact, then, that George Walker, who also studied with Boulanger, was a classical musician his entire career, is all the more impressive. Born in Washington, D.C. in 1922, Walker began studying piano at five, and went on to become the first Black instrumentalist to perform at Manhattan’s Town Hall. It’s one of a list of other “firsts” too long to enumerate here other than to add that Walker was the first African American to win a Pulitzer Prize for music. Still, he remains relatively unknown despite his vast accomplishments. To say George Walker is woefully underappreciated, is an understatement.

The Alexander String Quartet (AST) will begin remedying that unfortunate fact this month, where they’ll perform some of Walker’s work in a series of virtual concerts presented by Baruch Performing Arts Center through Nov. 29.

Though based in California, the group regularly performs in New York City and feel proud to continually cultivate new audiences. Fred Lipsitz, of AST told The Amsterdam News, “Some people might not think it’s their place to attend these things, but if we can do it in a wonderful performing arts center like Baruch College’s, at an amazing price, that’s great. People have come up to me years later and said, ‘I fell in love with the violin or the cello when you guys played for us.’”

The group will perform Walker's "Lyric for Strings" as well as pieces by Beethoven to also celebrate the German composer’s 250th birthday. Dedicated to his grandmother, Walker’s “Lyric for Strings” is often said to have been inspired by “Adagio For Strings,” composed by fellow Curtis Institute grad Samuel Barber. It remains of the most frequently performed orchestral works by an American composer.

Walker’s son, violinist Gregory Walker told The Amsterdam News, “His grandmother was a quiet presence in their household. She had stories about her own childhood as a slave she would never tell them.”

Lipsitz and Walker’s son were friends in college and he met Walker when he came to visit. Lipsitz subsequently mentioned meeting the stately composer to one of his professors, who commented simply, “He’s a fabulous composer who should be better known.”

“Lyric For Strings,” derived from the middle movement of Walker’s first string quartet, Lipsitz states, “Is really on par in its beauty and design, and it’s genesis of inspiration from Beethoven, to the Barber adagio. It’s gorgeous!”

Gregory emphasizes though, that "Lyric" was not programmatic, or meant to tell a particular story. “My father had a very purist approach to composing, he explains. “His grandmother died when he was making the piece and he wanted to make that dedication to her acknowledging the similarity of the work’s mood and temperament to what he remembered of his grandmother.”

Describing his father’s approach to his music career he says, “He was an outsider and he had this musical vision to promote against all odds. That was his focus.” Of his father’s compositions Gregory says, “His work has a lot of layers. You don’t get it off the bat, you really have to work at it.”

George Walker, his son admits, was keenly aware of the limitations for Black classical musicians and composers, even one of his esteemed caliber. “It was definitely something he struggled against his whole career. It was most visceral when he started. Back in the day, the best he could be considered and promoted as was like, a novelty act.”

Those pressures eventually forced Walker, who passed away in 2018, to rethink the trajectory of his career. Gregory explains, “Eventually, it just ground him down.” Walker pivoted to focusing more on composing than on being a pianist.

Gregory, who will appear in a live streamed concert discussion on Nov. 19 at 7 p.m. EST with violinist Kelly Hall-Tompkins, believes his father would have been delighted to have the Alexander String Quartet performing his work. “I’m very grateful to the Alexander String Quartet for highlighting this. My father would have been thrilled to have an ensemble of their caliber performing it. He had a light, he had something to offer and wanted to share it with as many people as possible.”