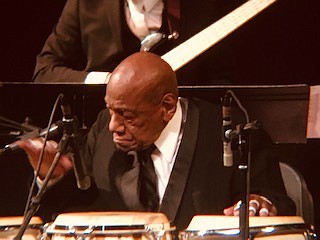 Cándido, known as the innovative father of conga drumming, who was the first to play multiple congas, while mentoring and inspiring musicians for eight decades died on Nov. 7, at his home in New York City. He was 99.

His death was announced by the National Endowment for the Arts, which had named him a Jazz Master in 2008. The cause was not released.

Cándido, the most recorded conga and bongo player in history, influenced every aspect of popular music from rock, pop to R&B, jazz, Latin and Afro Cuban jazz and dance music. In November 2016, at the age of 95, he decided to retire. A major celebration concert was held in his honor at Harlem’s City College Center for the Arts (Latin Jazz USA as the organizers). During an interview for this column Cándido noted, “I don’t mind playing anything as long as it’s good music. The music and arrangements make the music different but when people listen and dance to it that makes it beautiful and gives me inspiration.”

After his celebrated retirement Cándido continued to play mostly as a special guest with musicians like percussionist, composer, educator Bobby Sanabria and pianist, composer Randy Weston (he played on his legendary recording of “Uhuru Afrika,” Roulette 1960) two of his closest friends. He continued to play well into his 98th birthday.

As a member of the Conga Kings, Cándido recorded two albums with Patato and Giovanni Hidalgo for the Chesky label. In 2004, he recorded “Inolvidable” (Chesky) with Graciela, the longtime singer for Machito’s big band, the album earned a Grammy nomination. He appears in Ivan Acosta’s documentary about his life, “Cándido: Hands of Fire.”

“Reflecting on the recent passing of Cándido really puts into perspective how important a musical figure he was. His contributions to the evolution of modern conga and percussion performance were monumental,” said drummer, composer, bandleader, educator Bobby Sanabria. “From developing the techniques to play multiple drums, tuning to specific pitches to play melodically, coordinated independence as applied to percussion, too inventing the pedal to play a cowbell with one’s foot so that one person could play a variety of percussion instruments simultaneously. He was simply game changing.

“I’m privileged and honored that most important he was my friend and a second father to me. ¡Que viva Cándido!”

Cándido got the idea of playing multiple congas (three or more) by watching classical timpani players in Cuban orchestras as a young boy. “I thought it would be a good idea if I did that with my congas plus it gives me more room to spread sounds,” said Cándido in an Amsterdam News interview. This technique led to his polyrhythmic style of playing which is now basic for most conga players. This new style of playing multiple congas earned him an undeniable reputation giving him an entrée to play with everyone from Gene Ammons, Charlie Parker, Wynton Kelly, Grant Green, Duke Ellington, Tony Bennett, Celia Cruz, Lena Horne, Billie Holiday, Myrta Silva, Dinah Washington, La Lupe, Tito Puente, Chico O’Farrell, Sr. and two years with the Billy Taylor Trio. They were the house band at the Down Beat Club in Manhattan. He was also featured on The Billy Taylor Trio album (Prestige 1954). Later that same year he performed and recorded with Stan Kenton.

Cándido Camero Guerra was born April 22, 1921, in Cuba’s San Antonio de los Baños, near Havana. He was surrounded by music with his mother Caridad Guerra always singing around the house and father Cándido Camero playing the tres (guitar). He was 4 years old and in kindergarten when his uncle, a professional bongo player, taught him how to play. His father only being able to provide the essentials made his young son a set of bongos by using two condensed milk cans, covered with skins. His father taught him to play the tres and he learned how to play the bass from his grandfather. He became proficient in all three later switching to the conga as his primary instrument. “Without my parents NO Cándido I am very proud and lucky for them,” stated Cándido.

Cándido began playing the tres professionally at the age of 14 for various son ensembles such as Sonora Piñón and Conjunto Segundo de Arsenio Rodríguez (Arsenio’s band). In an interview with The Amsterdam News (2015) Cándido gave credit to Arsenio Rodriguez his fellow Cuban for revolutionizing the music by adding his conga and bongos to his conjunto (group). He said it was very Afrocentric. “One of the night clubs in Cuba was looking for a conga player but I told them I only played bongos but I tried and was hired,” said Cándido.

Mongo Santamaría became Cándido’s main mentor and conga teacher in Cuba. “Mongo was a mailman and I used to help him deliver the mail so he could finish early and we could rehearse longer,” said Cándido. At age 20 he began working at Cuba’s most extravagant club The Tropicana where the trumpeter and composer Chano Pozo was also an orchestra member. The singer and actress Josephine Baker was one of the acts he performed with at the club. During the afternoons the orchestra did a live broadcast on Cuba’s CMQ radio station. Cándido was a force in the orchestra until 1946 when he left to work with the Cuban dance team Carmen & Rolando. That same year the dancers and band left for New York City to perform on Broadway. He later played with Babatunde Olatunji at the Village Vanguard, a gig that was recorded live. When he played the Apollo Theater with Billie Holiday, he had a routine with then World Heavyweight Champion Joe Louis, “he played the conga and I wore boxing gloves.” In 1948, he made his first U.S. recording with Machito and His Afro-Cubans on the tune “El Rey del Mambo.” Dizzy Gillespie a major component in the movement of Afro Cuban music contacted Cándido after the death of his conga player Chano Pozo. Their collaboration led to the 1954 recording of “Afro.”

During the 1950s he performed on the television variety shows of Ed Sullivan and Steve Allen. Later during the Civil Rights-Movement he performed at the National Black Caucus Convention.

“I started playing with Cándido as a kid on Chico O’Farrill’s commercial jingle sessions. Later on he was a featured soloist in Chico’s artistic ventures. I watched him bring down the house with his fingertips countless times. You play as you are and Candi (as we called him) was the gentlest, kindest, most wizardly human being you could possibly know and this revealed itself every time he stepped up to the congas,” stated pianist, composer, Arturo O’Farrill, the founder and artistic director of the Afro Latin Jazz Alliance. “When I was first asked to create the Afro Latin Jazz Orchestra, on our very first concert, I was asked whom I’d like to be our guest soloists, I asked for Tom Harrell and Cándido Camero. I began my musical journeys with this giant and even though he no longer sounds his drums, he is deeply imbued in every note I play and in the notes of thousands of others. I am truly saddened that he is no longer with us because the way he carried himself is a life lesson for all young musicians.”

Camero had stated in an AmNews interview he was most proud and thankful for the sincere help of Maria Poser, his attorney Roberto Marrero and his assistant Al Acosta.

NOTE: The two-hour special radio tribute to Cándido by Bobby Sanabria is available for the next two weeks. Simply type in your search window, WBGO Latin Jazz Cruise.