Despite a setback, Rider ready for action 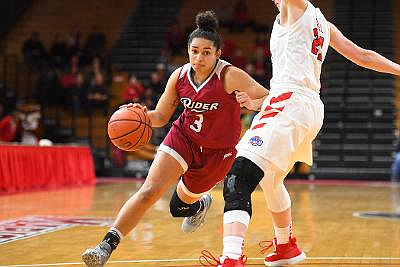 The end to the 2019-’20 season was heartbreaking for the women’s basketball team at Rider University in New Jersey, which was poised to make its first-ever appearance in the NCAA Division I Women’s Basketball Tournament. The tournament would have been an excellent showcase for Stella Johnson, the leading scorer in the nation. Thankfully, Johnson was picked in the 2020 WNBA Draft and got to play during the wubble season.

Following the graduation of Johnson and a couple of other key players, the Broncs are a young team, but no less eager to see action when D I season kicks off later this month. Unfortunately, training was derailed when one of the players tested positive for COVID-19, putting the players and coaching staff into isolation for 14 days. Rider has a quarantine dormitory in which the players resided.

“There is a lot you can do on Zoom. We’ve become very creative,” said longtime Rider head coach Lynn Milligan. “Safety and health are first this year.”

Milligan is honest in saying the new normal is challenging. She is someone who plans things carefully, and she and her staff want the players to be happy and have a great experience, but also be prepared for sudden changes. The attitude is to cherish every moment they have practicing and playing.

“[Last year’s seniors] really solidified our culture and what our expectations are every year regardless,” said Milligan. “This next group is ready to take the mantle and move on.”

Unfortunately or fortunately, the new players don’t know the old normal, so they’re making the best of what is in front of them. Milligan is optimistic and happy with the team chemistry and the camaraderie they’re displaying in this unusual time. “They’re willing to listen and learn, whether it’s on Zoom or in person,” Milligan said.

Returning players to look out for this season include junior Amanda Mobley, who will again be running the point. Milligan said, “We’re really counting on her to lead the team on and off the court, and she’s doing a great job.” Mobley is a preseason All-MAAC Second Team. The team’s one senior, guard/forward Daija Moses, has been a significant contributor the past two years and is poised to make an even bigger impact. As far as the sophomores, Milligan mentioned guard Maya Hyacienth, who honed her game guarding Johnson in practice last year. Her defensive game has always been good, and she’s improved her offense in recent months. Also, look out for sophomore post player Victoria Toomey.