The other twin pandemic: homelessness and hunger 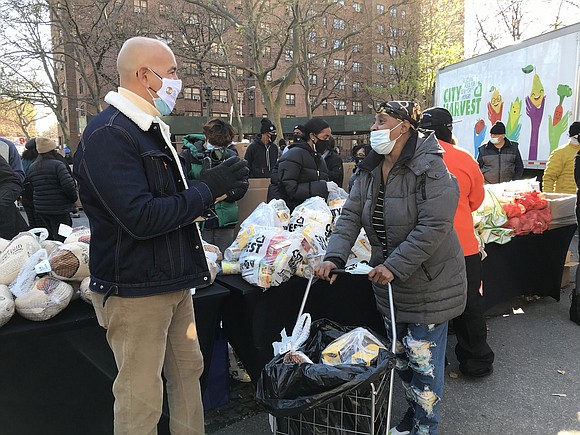 Bronx Borough President Ruben Diaz with a constituent at a food giveaway in the Bronx Office of Bronx BP Ruben Diaz, Jr./Flickr

November 15-22 is National Homeless and Hunger Awareness Week and as COVID-19 continues to impact the economy, more people are finding themselves homeless and/or without food while those already destitute prior to the pandemic are worse off.

With the Thanksgiving holiday coming near, food giveaways are popping across the city and officials say the need is even greater this year. Homeless officials are also looking for solutions as over 57,000 people are sleeping in shelters.

According to AARP’s recent “Disrupt Disparities 3.0” report, the number of New York City residents facing food insecurity has nearly doubled since the onset of the pandemic, from 1.2 million to nearly 2.2 million, roughly 25% of the population. Nearly 40% of Black families are struggling with food insecurity.

According to advocacy group Hunger Free NYC, hunger is skyrocketing in New York City, with 38% of parents reporting they had skipped meals or cut portions for their children because they lacked enough money.

“It’s the worst situation it’s been in in modern American history,” Hunger Free NYC CEO Joel Berg told the AmNews. “There’s been no relief package so the money that people would use for rent or food has gone away. Before the pandemic there were a million people who couldn’t afford food and now it’s doubled.”

Breg added that mass job loss along with many food programs from schools and senior centers went away. Food charities also had to shut their doors along with food prices skyrocketing.

“The division used to be between white collar and blue collar workers but now the divide is between people who can work from home and those who can’t,” Berg said. “People who were poor and hungry before became poorer and hungrier and people at the edge of poverty became poor and hungry.”

Hunger can also make people more vulnerable to COVID-19. Malnourished individuals have compromised immune systems and are more likely to contract and pass on COVID-19. Obesity also plays a fact since studies show that low-income individuals have less access to healthy food adding to the danger of COVID-19.

As the holiday season gets underway, New Yorkers are lining up at events for food boxes containing turkey and other items. Events have taken place in Harlem, Brooklyn and the Bronx this week with hundreds of people lined up for food they desperately need.

“Much like many of the other problems our communities face, COVID-19 hasn’t been the beginning of the problem but the magnification of it,” Myrie told the AmNews. “What we’ve seen is one level of food insecurity that has always existed in the community compounded by those new to food insecurity after losing a job who are also facing other crises like eviction. It is hard to understate how great the need is. Food insecurity is not going to go away, it’s going to grow.”

When COVID-19 hit, many food programs were forced to shut down due to a lack of volunteers or as a precautionary measure. At one point, one-third of about 100 agencies in City Harvest’s network were closed.

“Eight months after the pandemic began in New York City, it has become clear that the food access and economic challenges facing millions of New Yorkers are chronic and will not go away soon,” City Harvest Agency operations manager Seth Cowan told the AmNews. “City Harvest is still operating at a heightened capacity—we plan to rescue and deliver 118 million pounds of food between July 1, 2020 and June 30, 2021, which is the most food our organization has ever moved in a year.”

Homelessness continues to be a problem in the city with experts predicting a large wave of homelessness post-pandemic due to many not being able to pay rent. AARP’s “Disrupt Disparities 3.0” report reveals that COVID-19 is widening housing disparities by race and income.

Unemployment rates reached nearly 17% among Blacks in April. About 25% of Black and Latino families reported not being able to pay their rent in May and half of Black tenant households in New York State fell behind on their rent as of late May/early June. Black New Yorkers makeup 57% of the city’s homeless population.

Eviction moratoriums have held off people getting kicked out of their homes. As a COVID-19 vaccine nears and normalcy is on the horizon, there could be mass numbers of people living on the street if tenants can’t pay arrears once the state’s eviction moratorium ends.

Community advocate and President of Central Park South Civic Association, Michael Fischer, told the AmNews that the homeless epidemic is at its highest since the Great Depression.

“The biggest fear that I have is that a lot of people who have lost their jobs could be forced out of their homes,” he said. “We have about 80,000 homeless people in New York City and I can see that doubling or tripling over the next five years. I don’t think we have a handle on how bad it really is. You’ve got families that are single parents and they don’t have a job or affordable housing and they get stuck being placed in homeless shelters. Fortunately, people are not being forced out on the street but eventually it’s going to happen.”