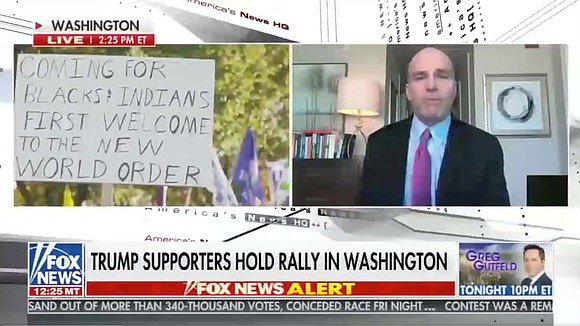 The handwritten sign that showed up at 12:25 MT on the screen of FOX TV’s live coverage of the lunacy that was obviously a call to action to the Proud Boys by Donald Trump, stated boldly: “Coming for Black & Indians First, Welcome To The New World Order.”

The sign was so disconcerting, that Fox anchor Eric Shawn broke from his conversation with a Republican strategist to say: “We’ve just seen a very disturbing sign. It said, ‘Coming for Blacks and Indians first welcome to the New World Order.’ Who the hell knows, you know, what people have and what they say on these things?”

These are the “good people” who Donald Trump has said exist on both sides, and who he has warmly embraced. The fascists, the Nazi-lovers, the bigots, the xenophobes, and the white supremacists, who have been so emboldened by Donald Trump, that they have been able to crawl out of their dark caves into the public and espouse their dark thoughts publicly, and now are aghast that they have to crawl back in.

A group that professes to be “good Christians,” but are filled with hate in their hearts and a level of ignorance that is hard to comprehend to anyone with half a brain as they look on with astonishment at the descent of America into s-hole status, thanks to Donald Trump.

The rally and sign came on the same day Hindus globally marked Diwali, the festival of light, and of good over evil. It came, as the U.S.’ first Black as well as Caribbean and Indian heritage Veep, lit a diya to mark the religious day.

There is no doubt in my mind that the sign was a clear message to Kamala Harris, a product of a Black, Jamaican immigrant father and an Indian immigrant mother, who has now ascended to the second highest office in the land and made history as a Black woman and the daughter of immigrants. Why else would the sign’s creator and proud promoter, selectively choose “Blacks & Indians” as a target “first?”

The rally of the deplorables also came as many, including this writer, are still in shock over the fact that so many so-called people of color voted for Trump.

Drilling down in the Asian American data, it clearly shows that Indian Americans, which VP-elect Harris has consistently chosen to claim while ignoring her Caribbean heritage, as well Filipinos, Koreans and Chinese, all seem to have drifted towards Trump. The trend was so dramatic among Vietnamese Americans, that they, like Cubans, actually favored Trump outright in 2020.

Why? A mix of racism, self-hate, ignorance and mental slavery is my guess. Now I hope those Blacks and Indians/Asians who voted for Donald Trump, see this sign and understand that their lives too are at risk from the zealots who are all about white superiority and supremacy.

These stupid Trump supporters of color are automatically disqualified from that “world order” by the color of their skin. And no, not even Trump’s red cap perched on your Black or Brown head will save you.

The intent of the Maggots for Trump is clear and has always been clear: they are after the extermination of all non-whites from the All-White World Order that Donald Trump is helping them create in 2020.

You are an absolute fool for giving your vote to help them Make America White Again and for pushing their new world order, and for thinking that somehow, you will be included.

Hope this is the wake-up call you so desperately need. Thank God, 75 million plus people and most Black AND Caribbean voters, especially Black and Caribbean sisters, had the sense to help Make America Breathe Again.