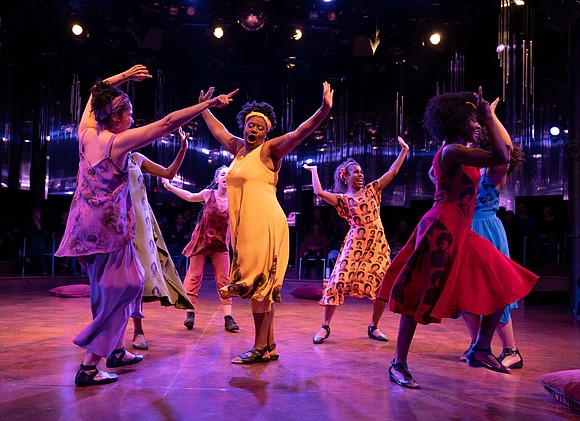 320: The company of for colored girls who have considered suicide/when the rainbow is enuf, written by Ntozake Shange and directed by Leah C. Gardiner, with choreography by Camille A. Brown, running at The Public Theater. Joan Marcus photo

The nominations for this year’s AUDELCO awards, which recognize excellence in Black theater, are out and they reflect the best and the brightest from the 2019-2020 theater season, which of course was abruptly ceased due to COVID-19. Prior to the pandemic the theater community managed to present 26 productions that made the nominations cut.

Manhattan Theatre Club presented a very enthralling drama called, “The New Englanders” a play that came away with seven nominations. It was a fascinating story that dealt with the relationship between a biracial male couple and their daughter. It is nominated for best play; playwright, Jeff Augustin; director of a play, Saheem Ali; lead actor in a play, Teagle F. Bougere; lead actress in a play, Kara Young; lighting design, Alan C. Edwards; and sound design, Palmer Hefferan.

The Keen Company beautifully brought to life, “Blues for an Alabama Sky” and also earned seven AUDELCO nominations. It is nominated for best revival of a play; director of a play, LA Williams; lead actor in a play, John-Andrew Morrison; lead actress in a play, Alfie Fuller; featured actor in a play, Khiry Walker and Sheldon Woodley and costume design, Asa Benally.

The Public Theater, MCC Theater is nominated for six AUDELCOs for “The Wrong Man.” The musical is up for best musical; director of a musical, Thomas Kail; outstanding musical director, Alex Lacamoire; choreographer, Travis Wall; lead actor in a musical, Joshua Henry; and featured actor in a musical, Ryan Vasquez.

I have to admit when I heard that The Public Theater was going to do “For Colored Girls Who Have Considered Suicide/When the Rainbow is Enuf” I was very excited and couldn’t wait. And the production was worth the anticipation, it was captivating. It is up for five VIV nominations for best revival of a play; outstanding musical director, Deah Love Harriott; outstanding musical composer, Martha Redbone; choreographer, Camille A. Brown and costume design, Toni-Leslie James.

One of the most brilliant playwrights that I have had the privilege to experience, Donja R. Love was produced by The New Group with his moving play, “One in Two,” the play also received five much deserved nominations for best play; outstanding ensemble performance, Jamyl Dobson, Leland Fowler and Edward Mawere; playwright, Donja R. Love; director of a play, Stevie Walker-Webb and lighting design, Cha See.

Three nominations were garnered by four theater companies. Signature Theatre Company, presented a splendid, powerful revival of Anna Deavere Smith’s “Fires in The Mirror” and it is nominated for solo performance, Michael Benjamin Washington; lighting design, Alan C. Edwards; and sound design, Mikaal Sulaiman. WP Theatre presented the innovative, touching play “Where We Stand” and it has two nominations for its creator Donnetta Lavinia Grays for playwright and solo performance; Tamilla Woodard is nominated for director of a play. “Halfway Bitches Go Straight to Heaven” was a phenomenal production, presented by Atlantic Theater Company and LAByrinth Theater Company. It is up for best play; lead actress in a play, Liza Colón-Zayas; featured actress in a play, Patrice Johnson Chevannes.

The 48th Annual AUDELCO Awards will occur virtually on Monday, November 30, 2020 at 7pm. This free event will be streamed via Zoom and Facebook Live. To book your virtual seat and receive your link, RSVP at Eventbrite at https://bit.ly/AudelcoRSVP!