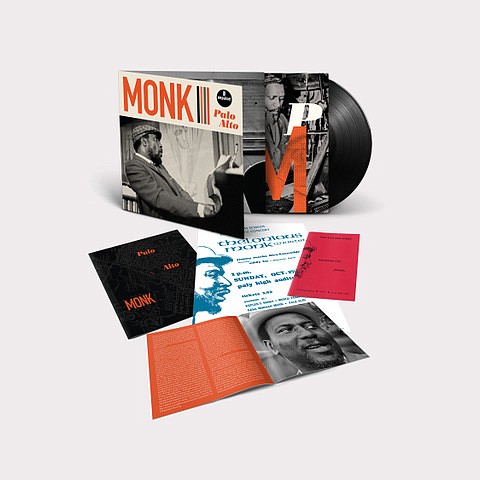 Over the years various recorded gems from live jazz club sets to concerts and even rehearsal sessions have been found behind dusty doors of memories. So was the most recent discovery, a tape recording of Thelonious Monk playing an afternoon high school gig in Palo Alto, California over 50 years ago. Danny Scher found the tape in his family’s home, bringing back memories of when he was a young jazz fan and promoter at 16 years of age and pulled off the surprise concert of all time in the Palo Alto community.

It is astonishing that Scher, a student, was able to get Monk at the height of his career, shortly after appearing on the cover of Time magazine, and his quartet at its musical best. It was a dream come true for him that happened at his Palo Alto High School Oct. 27, 1968. Fortunately, the youngster had enough foresight to ask the school’s janitor to record the gig––the same person who doubled as the piano tuner.

Monk and his all-star quartet––tenor saxophonist Charlie Rouse, bassist Larry Gales and drummer Ben Riley––delivered an outstanding energetic 47-minute set in the school’s auditorium. The live performance “Monk in Palo Alto,” on the jazz label Impulse! Records features his touring repertoire that became jazz standards; “Ruby, My Dear” with Rouse playing a bold melody upfront as Monk takes the lead with his unique dazzle; “Well You Needn’t” is a 13-minute joyful journey with each member soloing; “Don’t Blame Me” the beautiful ballad with Monk’s solo that moves into “Blue Monk,” swings through “Epistrophy.” The show ends with Monk’s encore slowly striding through the 1925 Tin Pan Alley tune by Rudy Vallee, “I Love You (Sweetheart of All My Dreams)” and after a standing ovation saying his goodbye to make their next gig that evening in San Francisco. The pianist was in the middle of a three-week run at the Jazz Workshop in San Francisco.

I wasn’t familiar with Monk’s rendition of Rudy Valle’s tune “I Love You.” But Monk’s son, the composer, educator, and founder of the Thelonious Monk Institute, T.S. Monk, noted, “You must remember Thelonious’ generation elders like Oscar Peterson, Wynton Kelly, Duke Ellington had an incredible repertoire. He knew hundreds of tunes. Not many young musicians today can call on such a wealth of material to play from.”

The sound of the recording is excellent which is surprising since it was taped in a school auditorium with only two microphones but T.S. noted the janitor had some technical expertise. “After hearing the tape, I was convinced it was one of my father’s best recordings. At first when Scher called me about the tape I was like OK another person trying to peddle some lost tape but when I heard it and the back story it was a go. I never knew my father had ever played a high school concert. I think he was intrigued this teenager called him to book a date and offered a fee of $500. It was a verbal agreement––a contract was never signed. It wasn’t the money, it was hardly enough, but my father loved kids. He always had my sister and I sitting on his knee and often took my cousins with him on the road.”

Although Monk had recorded on such respected record labels like Riverside, Columbia and Prestige this Palo Alto concert was released on Impulse! Records. T.S. explained although his father had success on these labels it was simply a matter of being offered a better deal by Impulse! This was the home of John Coltrane and now, 52 years later, Monk has made his posthumous label debut on one of jazz’ most significant recording labels. “As the representative of the Thelonious Monk Estate it was up to me to make the best deal possible for this project.”

In the year of 1968 a turbulent vicious hurricane swept through America in a series of twists and turns, against a backdrop of racial tension and political volatility that marked the brutal assassinations of Martin Luther King Jr. and Robert F. Kennedy, unsettling revelations about the Viet Nam War and protests throughout the country.

“The fact this recording remained lost until now is very appropriate. Similar to 1968 we are in the continued struggle against systemic racism, police brutality, racial tension and a president who promotes political strife,” said T.S. Monk. “Once again we have many young people of different races in the struggle including those from Black Lives Matter.” Touring the South early on playing revival gatherings Monk was well aware of Jim Crow and all its misgivings. “Thelonious was aware of the times and situation in Palo Alto,” says TS. He was aware that he was going into a hot bed of racial conflicts. But in New York City he participated in the Civil Rights Movement by playing at fundraisers for the NAACP, Paul Robeson and other organizations.”

Days before the event Scher was busy putting up concert posters throughout the area. The day before the concert the young promoter called Monk but when he said to the pianist, “I’ll see you tomorrow,” and his response was “Why?” Scher reminded him of the concert date and Monk confirmed. Recognizing Monk’s status as one of America’s most prolific jazz pianists many in the city were skeptical if he would really show up at a high school. Scher had made a prior agreement with the local police to allow people to congregate in the school parking lot to see if he was going to show up. When Monk and his group stepped out of the Scher-family van, walking past a rainy parking lot full of surprised residents, it was a happy day. The audience was filled with jazz heads, students, teachers, Palo Alto and East Palo Alto residents and members of the Nairobi Movement (Black members looking to change the name of East Palo Alto to Nairobi and become an independent city).

There are quite a few projects going on behind the scenes that are representative of the Thelonious Monk Estate. “My father was an artist for the ages, he transcended pop culture beyond the music,” said T.S. “Thelonious Monk is a brand of unique originality. It is my responsibility to propagate his name in the fine tradition he set for me and generations of musicians and fans.

Most recently after stepping down from his chairmanship of the Monk Institute, Monk partnered with his cousin Marcella Monk Flake and Yale University to establish “The Monk Jazz Steam Collective” to help young children of all ages on many musical and educational levels in New Haven, Connecticut, as well as an extension in Monk’s birth place of Rocky Mountain, N.C. “This program will be more comprehensive than the Monk Institute,” says T.S.

In 2019 Monk created “Rhythm-a-Ning Entertainment” a multimedia company to handle recording and licensing issues for the TM Estate. That same year he launched a rose’ wine “LEGIT” along with Banville vineyards in Tuscany, Italy. The wine earned a “94” rating from the top critic in Wine Taster’s magazine. For the past decade Monk has enjoyed a relationship with North Coast Brewery (in Fort Bragg, N.J.), the producers of “Brother Thelonious Ale” which is a staple at jazz clubs and festivals worldwide.

T.S. daughter Sierra Monk and son Thelonious IV have created a merchandising website concern dealing with all things Monk at theloniousmonk.store. T.S. will be releasing his own record projects in the near future that will include a solo drum performance of Oscar Brown Jr.’s classic rap, “Bid’em In.” “There is much to do in music besides music,” said T.S. Fifty years later you don’t have to stand in a rainy high school parking lot for Monk At Palo Alto just purchase online at the Universal Impulse website, Amazon, Tubes and spot.

The 48th Annual AUDELCO Awards, the most significant awards representative of Black theater, will be streamed virtually Nov. 30 at 7 p.m. The presentation will be hosted by Roger Guenveur Smith, AUDELCO award winning actor for “The Huey P. Newton Story” and “Smiley” in Spike Lee’s “Do The Right Thing” and numerous nominated shows from the Billie Holiday Theatre, to Black Spectrum, New Federal Theatre and The Public Theater.

Interesting in the musical composition category vying for the award in two different Ntozake Shange plays are Martha Redbone (her music is a mix of rhythm and blues and soul music influences, fused with elements of traditional Native American music) for “For Colored Girls Who Consider Suicide When The Rainbow is Enuf” at the Public Theater and jazz saxophonist and composer David Murray for “Photograph/Lovers in Motion,” a Negro Ensemble production. For further information go to: www.audelco.org.

In his wit and musical genius Monk didn’t forget Thanksgiving as heard on his album “Monk’s Time” (Columbia 1964) so everyone please have a “Stuffy Turkey.”