Huddle for the people 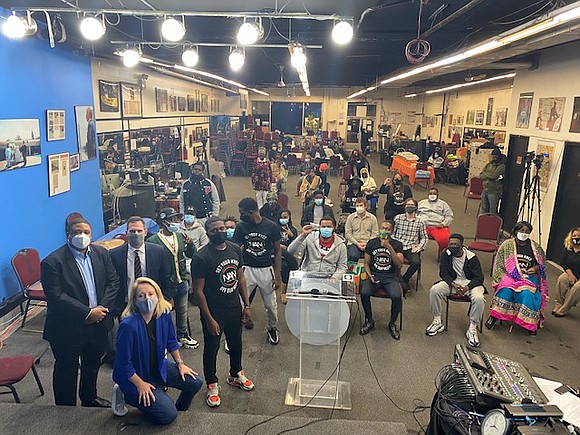 Each and every Monday the National Action Network’s Youth Huddle hosts a safe space for the young people to discuss a variety of topics that affect the community and the world. Led by Ashley and Dominique Sharpton, the Huddle Cabinet creates and produces the evening program for their peers. The theme for the last two Huddles was a two-part series focused on the 2020 post election reactions. Held live from the National Action Network and live-streamed on social media, the programs consist of a 90 minute intergenerational panel discussion.

On the opening night of the series, a beautiful acapella selection kicked off the evening from one of the amazing panelists, Jasmine Jefferson, CEO of iPray Life. The discussion for Monday highlighted the next steps that should be taken now that there is a newly elected president. Moderated by Huddlers Isabelle Laforest and Ahmed Kamil, the panel consisted of several special guests who make their own social impact within their respective communities. Panelists included Brandon Hicks ( NY Governor’s Office), Assemblyman Al Taylor (District 71), Dennis Richmond (NY HBCU Initiative), Jamel Henderson (advocate/ professor), Follyvi Dossa ( NAN Youth Huddle), Tim Hunter ( NAN Youth Huddle), Derek Perkinson (National Action Network ) and Theresa Weatherspoon ( former WNBA legend). Jefferson delivered a beautiful opening song to keep people inspired and faithful during these turbulent times before moderators opened the panel up.

There were a variety of questions presented to the panel but the main recurring question presented in the discussion was, “Where do we go from here?” Panelists emphasized the importance of focusing on Georgia because the Democrats need the two remaining Senate seats. Another suggestion provided to the audience was the necessity of voting for local politicians when those elections roll around. Perkinson revealed some shocking statistics that New Yorkers should be ashamed of. He stated that out of over 8 million New Yorkers, approximately, 500,000 eligible voters voted in the last mayoral election. This should serve as an example of how a citizen’s voice can be lost. Exercise your right to vote.

Participants spoke passionately about the importance of voting from African American brothers and sisters and the need to keep the momentum of this past election going and to put the necessary work in.

Panelists such as Richmond and Henderson put emphasis on the importance of focusing on educational priorities which directly spoke to the young people watching and listening. The youth panelists stressed to their constituents the importance of the youth influencing other youth to do their research. Know who your local politicians are and how they affect the communities they live in. Utilize social media platforms to inform yourself. Tim Hunter is a young man who did just that and took action when he became old enough to legally make some changes within the world. In addition to directing their peers, young speakers requested the support of those that came before them.

Overall the need in the African American community to uplift one another was a point also highlighted. Each panelist brought their own unique light to their advice and suggestions about the elections and the next steps that must be taken in order to begin healing and repairing the country. There is more work to be done and the audience members are now informed and should be motivated by the range of ages among those who know that the Biden/Harris campaign winning the election is just the beginning.

Part two of the post election panel series was moderated by NAN Youth Huddle Co-Chair Dominique Sharpton and Huddlers Follyvi Dossa and Lamine Kone. The panelists for the night included the three candidates currently running for Manhattan district attorney: Alvin Bragg, Lucy Lang and Assemblyman Dan Quart. The discussion was an interactive discussion on multiple topics, including the importance of the local vote in addition to presidential votes, how to protect the city from gun violence, and some of the biggest issues that the candidates believe are problematic with the system.

Candidate Bragg discussed shrinking the system and minimizing interactions in addition to the importance of providing support to those coming home from being incarcerated. Bragg highlighted that there are so many that are in prison, but no resources are provided to those who complete their sentences. Therefore, the opportunity for a cycle to occur can be likely. Candidate Lang stated that people are being scammed and taken advantage of. Lang also strongly believes in dignity and how you treat others. She stated that, “ …The system is built specifically to prevent us from really seeing people.” Assemblyman Quart informed the audience that the DA is the person who provided the New York Police Department the power to arrest and prosecute citizens. Quart stated that the decision was made in a way to deal with the Black Live Matters protestors and that power was eventually rescinded. The Assemblyman believes that the current DA stands for nothing. All of the candidates made it clear that there is much work to be done within the City of New York.

The running mates were asked how to protect affected areas of the city from gun violence. Gun violence is a major issue within urban communities such as Harlem and Brownsville. Each candidate spoke about how they plan on addressing the matter. Bragg stated multiple ideas including street corner resources, tracking illegal gun sales and cutting off the flow of guns. In addition, he emphasized the need for community resources in order to have preventative options for those in need. Lang informed the audience that she has an eight-point plan to curb gun violence. Quart made a powerful statement, saying, “…If these shootings happened in my district, the city would be shut down.” He made it clear more has to happen.

Following the group discussion, Huddlers were able to break out into three different groups and have a one-on-one interaction with each candidate. They were able to engage with each candidate and discuss specific questions. These breakout groups enabled participants to get to know the candidates for Manhattan district attorney on a more intimate level, really educating themselves and learning about who they are. While these three representatives all raised great points, there are more candidates running who also need to be researched. The overall message being, local elections can affect you directly and going out to vote for local elections is as important as voting on a federal level. Know your candidates and what they stand for, and see if they show up. Stay tuned for more NAN Youth Huddles.