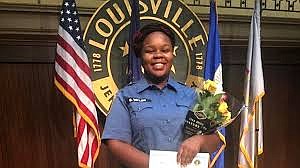 The grand jury ruling on the police officers who killed Breonna Taylor upset many. It was not different with union leaders.

Last week, a grand jury charged former Louisville Metro Police Department Detective Brett Hankison with three charges of wanton endangerment in relation to the murder of Breonna Taylor. Hankison pleaded not guilty during an arraignment. The other two officers involved in the murder, LMPD Detective Myles Cosgrove and LMPD Sgt. Jon Mattingly, had no charges filed against them.

In a statement, 32BJ SEIU’s Kyle Bragg expressed outrage at the decision as a representative of many Black essential workers. He is upset that the officers walked away with no consequences, but he and his constituents will continue to fight.

“Breonna Taylor—an EMT, essential worker, daughter, sister and friend—deserves justice. An indictment of one of three of Breonna’s killers is a far cry from justice,” stated Bragg. “Breonna Taylor’s grand jury decision sadly reaffirms that the legal system condones the murder of Black people at the hands of police. This is one more insult to the Black community and to Breonna Taylor, a beautiful life that was stolen by racism and violence. Today’s decision shows that structural racism is rampant and on full display in our legal system.”

This week, a Jefferson Circuit Court judge, per a grand juror’s request, ordered grand jury recordings made public by Wednesday. The ruling comes after an unidentified juror requested to allow panel members to talk publicly about the experiences.

Kentucky Attorney General Daniel Cameron said that he will comply with the judge’s order despite his misgivings with the idea.

“The Grand Jury is meant to be a secretive body,” said Cameron in a statement. “It’s apparent that the public interest in this case isn’t going to allow that to happen. As the special prosecutor, our team has an ethical obligation not to release the recording from the Grand Jury proceedings, and we stand by our belief that such a release could compromise the ongoing federal investigation and could have unintended consequences such as poisoning the jury pool.

“Despite these concerns, we will comply with the judge’s order to release the recording on Wednesday,” concluded Cameron.

No matter the revelations on the record, AFL-CIO President Richard Trumka is not accepting defeat. He said Breonna Taylor’s death is one of the reasons the union formed its task force on racial justice to get rid of discrimination in communities and workplaces.

“It’s ingrained in the share of Black workers who are disproportionately out of a job or dying from COVID-19,” stated Trumka. “The time for action and reform is long overdue, and it will only happen if we embrace it as one united movement. In light of the violence against police officers doing their jobs in Louisville last night, we also reiterate the call of our Racial Justice Task Force for civility and peace while we continue to demand justice.

“We will not rest until every person who lives and works here enjoys equal protection under the law,” concluded Trumka.