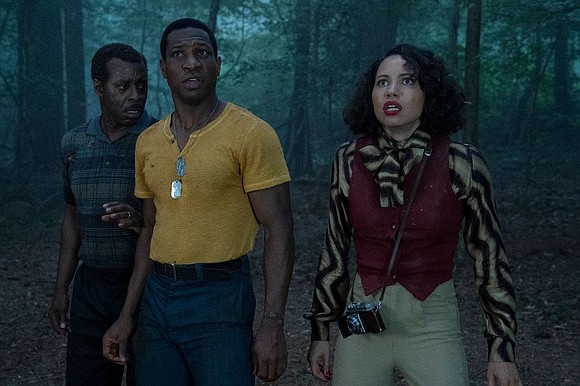 (L-R) Courtney B. Vance, Jonathan Majors and Jurnee Smollett in a scene from “Lovecraft Country” HBO

It would be wrong to try and quickly devour “Lovecraft Country,” a series that demands to be carefully chewed and slowly savored. The fantastical horror drama teems with thought-provoking social commentary, earthy humor, lots of action and fun, fantastic fear. Written by Misha Green and produced by Jordan Peele and J.J. Abrams, it delivers all the thrills and extraordinary special effects you would expect.

Based on the novel of the same name by Matt Ruff, the “Lovecraft” in the title refers to American horror author H.P. Lovecraft and the fictional region in New England where many of his stories were set. H.P. Lovecraft was a virulent racist, so a series that enthusiastically interrogates white supremacy using a predominantly Black main cast is delicious irony.

Jonathan Majors ably leads the cast as guilt-ridden Korean war vet and estranged only son Atticus Freeman. He’s dreaming of baseball when we meet him on a bus circa 1955, rolling through a midwestern field of dreams, heading to his Chicago hometown. The reason for the trip is a letter from his father, Montrose (Michael K. Williams), saying that he found information about Atticus’ now deceased mother’s (Erica Tazel) ancestry, and that Atticus has a secret birthright. The letter indicates the answers are in “Lovecraft country.”

Arriving in Chicago, he finds out from his Uncle George (Courtney B. Vance) that his father has been missing for two weeks. They decide Montrose might be in trouble and that they need to rescue him. And Lovecraft country is the most logical destination. Coming along on the road trip is Leti Lewis (Jurnee Smollett), a childhood friend, also newly back into town, who’s been informed by her exasperated, oft-disappointed sister Ruby (Wunmi Mosaku) that she can only stay at her place for two days. A road trip is a pretty good option for this adventurous gal with nowhere to go.

The trio is summarily beset by monsters both human and non-human on the road, which winds through unfriendly sundown towns hosting famished, man-eating monsters. It turns out that Montrose was kidnapped by a secret society headed by Samuel Braithwaite (Tony Goldwin), though his Ivanka Trumpian daughter Christina (Abby Lee) seems to wield as much, or more, power as he. They’re both the platinum-haired, icy-blue eyed Nordic ubermensch of Nazi fairytales. Running day-to-day operations for the Braithwaites is William (Jordan Patrick Smith), who describes himself as a family friend but whose Teutonic appearance strangely mirrors the Braithwaites’.

One of the show’s drawbacks is the way in which the white characters are drawn, at least through the five episodes provided for preview. Sharply effective as antagonists, they’re also almost cartoon villains, with none given any interiority. Automatons with a singular obsession, they’re unaffected, good or bad, by anything that happens in the world. This is a tricky proposition given the long history of minority characters as caricatures and tokens. However, if the characters are evil human beings, they should be well…human beings…who are evil. That element would have helped the production pack a more powerful punch.

Like many modern HBO vehicles, “Lovecraft Country” is decisively feminist. Ruby, Ji-An (Jamie Chung), Christina, Leti, and Hippolyta (Aunjanue Ellis) are all forces to be reckoned with. Dee (Jada Harris), George and Hippolyta’s teen daughter, breaks other barriers as a feminine, female, Blerd.

This feminist dynamic subtly extends to the core of story in the pursuit of immortality by the Braithwaites. The power that the secret organization of WASP white men seeks has a Black woman at its source.

The acting is stellar. Wunmi Mosaku, who is channeling Sister Rosetta Tharpe when we meet her at a South Side dive, and makes imaginative use of a stiletto, unwittingly also becomes a pawn of the Braithwaites. Mosaku’s moving performance takes us as her life is seismically altered, punctuating the powerlessness that marks her existence as a whole. Smollett shines as the fierce, free spirited Leti. Jaime Neumann, who plays two roles, attacks them with great relish. And Jamie Chung is a revelation.

Soft jumps in genres, all with a Jim Crow twist, from one episode to the next, keeps the 10-episode series interesting. Beginning as a dark, bedeviled road trip drama, it veers into a poltergeist story, fades into character study, then charges into swashbuckling “Raiders of the Lost Ark” type adventure. The overall effect keeps the viewer considering the multi-layered story from several vantage points.

All manner of family discord and interpersonal and intrapersonal conflict provide a means for the audience to more fully connect with characters placed in supernatural circumstances.

“Lovecraft Country” brings text and subtext of America’s fraught relationship with race, shining light where Black and white experiences are two sides of the same coin: Atticus’ visions of his ancestor Hanna, an enslaved woman pregnant with her enslaver’s child. A sales girl’s racist white co-workers don’t want to talk to her at work but will accompany her to her neighborhood after work to enjoy the music and dance. A Black character is revealed, like the racist whites she often encounters, to have had no slaves in her ancestry. Atticus and his family reconciling their love of science fiction stories with the racism of the stories’ authors, and within the tales themselves.

Throughout, the characters heroically navigate quotidian struggles brought about by white supremacy. The constant “interruptions” to life, as Ruby describes them, that “living while Black” incurs. The viewer feels both the fear of death and the exhilaration of escape.