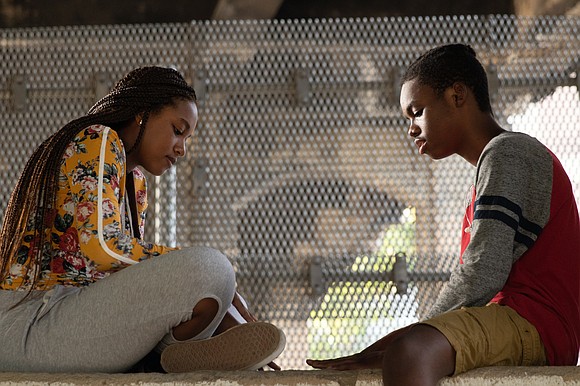 This is good storytelling. Keep your eye on director Angel Manuel Soto.

In “Charm City Kings” we get a peek into the world of a complicated Baltimore teen, Mouse (beautifully played by newcomer Jahi Di’allo Winston) who’s standing at a precipice, having to choose between preparing for a future as a veterinarian or “getting paid” by participating in a

It’s a gritty coming-of-age drama for sure. It moves fast, just like the dirt bikes these kids use as a statement for so many things. They all exhibit fearless sports-like showmanship when they are on their bikes, and this gives the film an authentic sense of community that these bikers have been a part of for the last 50 years.

I’m deeply impressed by director Angel Manuel Soto who is working from a screenplay by Sherman Payne and a story penned by Barry Jenkins, Chris Boyd, and Kirk Sullivan and is based on the documentary “12 O’clock Boys” from director Lotfy Nathan.

“Scared money don’t make no money”—this is what’s told to Mouse and it’s what this particular part of West Baltimore streets live by. It feels real, like I am peeking into home movies because we see the perspective of the people who live it—a subculture most outsiders, like myself, would never be invited to know.

The film starts strong allowing the audience to get to know and love Mouse—the middle-schooler who works part-time at an animal hospital pouring his little earnings into his savings to purchase his first ATV, a secret he keeps from his mother, Teri (Teyonah Parris) who doesn’t want him involved in the dirt bike scene that took his older brother’s (Stro) young life.

But Mouse can’t hear her warning. In his mind and heart he wants to honor Stro by mastering the thing he loved and that bonded them. Following in that path, he takes his bootleg ATV to The Ride, this is a place where riders show off their skills on a blocked-off city street every Sunday of the summer. And then the film moves into Baltimore’s drug trade but still keeps its integrity intact.

So much of what makes “Charm City Kings” is behind the scenes with director Soto and the cinematographer Katelin Arizmendi who does not miss a beat. He’s most artful when capturing the adrenaline-packed scenes like the chase scene between the cops and a couple of Midnight Clique (Stro’s old gang that Mouse wants to join) riders who threw a brick through a patrol vehicle window.

A credit to the filmmakers for creating Mouse as a fleshed-out character whose desires are clear even though they might seem basic on the surface; wanting a fancy bike and winning the heart of a new girl who lives just down the street. We can see that those seemingly basic wants are just placeholders for something bigger in his heart. It’s also clear that because he has those dreams he’s able to deal with the obstacles like poverty and peer pressure in the streets so spectacularly.

Kudos to the casting of the general ensemble of supporting roles. Their performances are convincing, proving that there are no small parts. It’s an interesting dynamic between Mouse’s mentors one being a good African American cop, Rivers (Will Catlett), and Blax (Meek Mill) a former drug kingpin turning his life around after his last stint in jail working in his own dirt bike mechanic shop.

In an odd set of events both Rivers and Blax want to keep Mouse out of the drug trade and on a successful path, a new twist in a film like this. It’s an interesting choice to keep the mostly white

West Baltimore police force in the background. That dynamic alone in a predominantly Black community is a source for more drama. Here they are respectfully following every law and de-escalating humanely before they shoot which, based on statistical facts, isn’t the case.

The film is shot on location on the same West Baltimore streets that made “The Wire” famous. Angel Manuel Soto is a director to keep an eye on. He’s sharp, passionate, skilled and fearless.