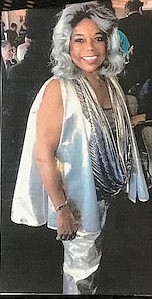 The veteran radio air-personality Jeanne Parnell has spent over 25 years on the airways. She has interviewed everyone from the actress, dancer and choreographer Carmen De Lavallade to Ruby Dee and Ossie Davis, Bob Law, the Rev. Al Sharpton, Congressman Charles Rangel, Miles Davis, Nick Ashford and Valerie Simpson, Harlem’s own Lana Turner, Coreen Simpson, Audrey Smaltz and former presidential nominee Hillary Clinton. “Every interview is so important to me, it’s a learning experience, each one is so individual,” stated Parnell.

Parnell’s radio career wasn’t a long-awaited dream, it just happened. The native New Yorker and her parents lived in the Fort Greene Housing Projects (originally for families of men working in the nearby Brooklyn Navy Yard) in Brooklyn. Her mother decided to send her (age 7) to dance school. The Mary Bruce Dance Studio was located in Harlem on 125th Street above the Baby Grand nightclub (between 7th and 8th avenues). After being accompanied by her mother on the Harlem journey, she learned how to make the trip alone. “My mother taught me how to take the A train to the studio and I only had to cross the street once to get there. She always gave me a dime so after dance class I could buy a Paradise ice cream cone,” says Parnell. “I loved dancing school, it was so much fun. It was where I learned I wanted to be seen and heard.”

Her dancing instruction paved her acceptance into the prestigious High School for the Performing Arts (now relocated and renamed LaGuardia High School for the Performing Arts). “At the time I attended there were only about five Black students that included founder and artistic director of the Dance Theater of Harlem Arthur Mitchell and actress Diana Sands.” Following graduation in 1954, she was given a scholarship along with the other dance students. “The Juilliard School of Dance was just starting their program and wanted the best to build on and our school of graduates was it,” explained Parnell. “I told my father I didn’t want to attend another school with all white kids again. He mentioned something about Howard University but I wasn’t listening.”

Parnell, being a rebellious teenager, took off to Atlantic City where she immediately landed a chorus line job with the Larry Steele Dancers at the celebrity driven Club Harlem. The elaborate all-Black revue produced by Steele (1941-1971) featured stars like Sammy Davis Jr., Dinah Washington, Bootsie Barnes, Hop Lips Page and Gladys Knight, as well as a stage show that included comedians, singers, showgirls and chorus lines. The club was a major stop for Black entertainers during the segregated Chittlin’ Circuit.

Parnell was only involved in the high-stepping, celebrity glitter for a mere week before she had to leave. “My aunt Rosa came from New York to get me. She told me my father said I had to leave and go to Howard University,” said Parnell. “I didn’t want to go but it was settled so my aunt and I got on the bus and went directly to Howard. I took the admissions test and was admitted as a student. I only had one problem so I called my father and asked him why did he send me to another school with white kids but he assured me they were Black just very light-skin. After making sure for myself up close everything was fine.”

Parnell became very dissatisfied with Howard University after only a year. She was not happy as a business major and shared her dissatisfaction with a roommate, who told their dormitory counselor. The counselor suggested Parnell speak with the university psychiatrist. Together they agreed to change her major to art. It worked out; she loved her new major and she loved Howard, graduating with a degree in Fine Arts in 1958.

Following graduation Parnell had no idea of what she wanted to do although Howard U. offered her a position in the Physical Education department as an instructor but she wasn’t interested. “D.C. was very segregated and they had a class system; everyone worked for the federal government which wasn’t for me and I missed New York,” explained Parnell. “Aside from that it was about the same time my mother became ill so I returned home.”

After working for a brief period, she attended Columbia Graduate School/Teacher’s College. After graduating, she became a teacher for the NYC Board of Education. Shortly afterwards she accepted an assignment at the Hillary Street office in Brooklyn working on Channel 25, the education television station. There she became the voice and later writer for the series “Images in Black” and hosted the program “Getting Started” about the negatives and positives of teaching.

She later returned to the classroom, teaching in the “gifted student program” at P.S. 116 in midtown Manhattan. The singer, songwriter, pianist and activist Alicia Keys was one of her students. “Alicia’s first performance was the school’s production of ‘The Wizard of Oz,’” says Parnell. “I turned young people into theater people introducing them to singing and dancing.”

While still taking on special assignments and teaching for the Board of Education full-time during the 1960s, Parnell married her second husband, the club owner Richard “Dickie” Habersham (they both grew up together in Fort Greene Projects). In his lifetime he owned 12 clubs. He owned five bars in Brooklyn: Dickie’s Monterey, the New World on Flatbush Avenue, the Uptown Lounge on Sterling Street (his flagship), and most notable was the famous jazz club Blue Coronet (in the Bedford-Stuyvesant community) in the 1960s and 1970s. Miles Davis, Roy Haynes, Max Roach, Abbey Lincoln, Randy Weston, Wynton Kelly and Mickey Bass were all club headliners. “Dickie introduced me to those great jazz musicians who played at the club; I became friends with Randy Weston, Mickey Bass and spoke with Miles on many occasions.”

When the married couple moved to Harlem, Habersham purchased Count Basie’s which became another hotspot for jazz. He played a major role in helping jazz to flourish in Harlem and Brooklyn. “I had some great times at Basie’s sitting at the bar talking with Sarah Vaughan,” said Parnell.

While Habersham was busy running his mini jazz empire, Parnell was busy at the Board of Education and landing at the Amsterdam News as a columnist under the byline “Dear J” with her photo, folks wrote in asking for advice (the column became syndicated in Black newspapers throughout the country). The position was due to her letter to the publisher John L. Procope. She says it was Nelson George, a film critic at the paper, who opened the door for her. “I worked at the Amsterdam News for eight years and loved every minute,” Parnell stated jovially during our telephone interview.

Parnell’s part time career (after school hours) journey took another direction when her friend Sanford Moore invited her to enter the world of radio as a talk show host on WWRL-AM (1970-73). She jumped at the chance and called her show “Interesting People,” sponsored by Dark & Lovely. She explained, “During those days the advertisers paid the salary of the hosts.” She was such a hit her friends Leslie Burns, advertising director, and Jill Ferguson invited her over to WLIB/WBLS-FM which she agreed to without hesitation. “I was in heaven working alongside radio personalities Frankie Crocker, Eddie O’Jay, Rocky G. and Vy Higginsen,” said Parnell with a laugh. “I was in awe of Frankie, he was so smooth.” Her show was called the “Jean Parnell Revue,” interviewing such guests as Altovise Davis and Little Anthony of the Imperials (her friends from Fort Greene Projects). She was at the station for eight years before her farewell. “Someone there stole my sponsorships. I cried when I lost that show, I never wanted to leave radio.”

On the education front Parnell was now director of Impact II (an innovative teaching program) supervising the program in the five boroughs at the Board’s main office on Livingston Street in Brooklyn. She retired from the position in 1995.

Just when she thought her radio days were over, Joe Brown, station manager at WHCR-FM (Harlem radio) asked her to host a show which she called, maybe out of nostalgia, “Interesting People.” Now 15 years later the youthful 84-year old continues her rein on WHCR-FM 90.3 every Wednesday 8 a.m.-10 a.m. The veteran of talk covers all the avenues from entertainment, theater, film, TV, special events and community happenings with an array of interesting people.


Her son Richard Parnell Habersham’s acting credits include the films Spike Lee’s “Do the Right Thing,” “The Long Walk Home” and the Broadway production “Joe Turner’s Come and Gone.” As a Harlem resident he is an activist; his community-based organization is Solutions Now. Her grandson Richard, age 10, is her life’s joy.

“I lived a wonderful life coming from the projects attending NYC public schools. I’ve had multiple careers in education, dance, writing, radio and television,” says Parnell. “I got my real start from the Amsterdam News; that column with my photo validated me for everything I did, they were always there for me. So many of my friends have passed but some have stuck around. I am so happy to be here still mingling with the public. I love where I am and who I am, still Jeanne living in Harlem and I love it.”