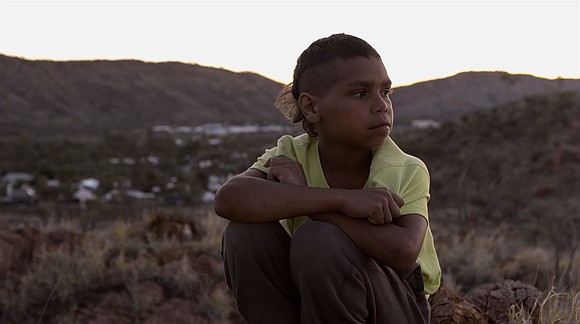 Dujuan, subject of ‘In My Blood It Runs’ which is part of PBS’ POV documentary series Image courtesy of PBS

When we meet pre-teen Dujuan, the main subject in the documentary In My Blood It Runs, currently streaming on PBS’ site, he’s living with his older brother, newborn brother, mother, and grandmother. They live in remote, semi-arid Alice Springs, in the middle of Australia’s Northern Territory, famous for the dry Todd River bed. The houses are fairly close together, there aren’t sidewalks, and streetlights are sparse. More of the area is undeveloped than developed, so there are large tracts of brush and dusty reddish soil visible. The first building in Alice Springs after the whites came in the 19th century was a jail. Most of the imprisoned were Indigenous Australians (also called Aborigine).

Dujuan is a highly intelligent, highly sensitive boy. He’s also in peril. At the time of filming, one hundred percent of the children in juvenile detention in Australia’s Northern Territory are Indigenous Australians, like Dujuan. Clearly, the school-to-prison pipeline is not just an American phenomenon.

“In My Blood It Runs” aims to tell Dujuan’s story, but it’s also a reminder that Dujuan’s story is universal for Indigenous people in Australia, New Zealand (the Maori), the Americas and Africa (including its diaspora).

There’s gun violence in Dujuan’s community. The Indigenous people offer answers. The government sends paramilitary-type units instead. A familiar experience to Indigenous communities the world over as well.

Dujuan’s mother was expelled from school at 14, and pregnant with Dujuan’s older brother a year later “I grew up around drunks,” she explains in calm resignation. “Then you start learning from them.”

Across the globe, Indigenous people have high levels of incarceration, substance abuse, less successful educational outcomes and high crime. Indigenous women across the globe incur disproportionately high levels of violence in the home and out. People from Indigenous communities struggle to find decent housing, jobs and education. There are a number of factors that cause this. However, the common denominator for them is loss of their land. When you lose land, of course, you lose everything associated with it and within it. It essentially guarantees one iteration or other of servitude.

In recent years, globally, whites have acknowledged Indigenous claims to their lands but end up doing little more than making what amounts to symbolic gestures. Indigenous Americans, Nobel prize-winning economist Hernando de Soto has said in the past, have “dead capital.” “They may possess a certain amount of land on paper, but they can’t put it to use by selling it, buying more to take advantage of economies of scale or borrowing against it.” And so many of these communities continue to suffer. The same or similar can be said of Africa, New Zealand and Australia.

The family’s welfare benefits are in jeopardy if Dujuan doesn’t go to school and there is the possibility he will be taken away by the government; a sore point with the Aborigine community discussed in “In My Blood It Runs.” During the 20th century, at least a hundred thousand Aboriginal children were taken from their families. It’s a phenomenon experienced by Indigenous Americans as well. Young Africans were stolen from Africa, and the children of African Americans were often sold away. In New Zealand, this phenomenon recently started taking shape, though the Maori have been fighting back.

Dujuan, as “In My Blood It Runs” observes him, is equal parts ordinary kid and old soul. He calls himself a healer, like his Aboriginal grandfather, with a supernatural ability to cure ailments. Facts about Aboriginal culture and history “before the white man came,” pepper his conversations. He speculates that his future son or daughter will inherit his gifts. He spends time collecting arrethe, an herb used in traditional Aboriginal medicine. Of his grandmother he earnestly declares, “I’ll love her until I grow old.”

Dujuan also plays with sparklers and laughs with friends. His face lights up at the sight of his chocolate frosted birthday cake. He slips junk food into the shopping cart at the grocery when his grandmother isn’t looking.

Dujuan also runs away from school more days than he goes, fails to go home when he should, and throws a teacher’s keys on the school roof. He asks his mother, “Do you love me?” You wonder why. Then you see.

His teachers coolly look past him as he raises his hand to give answers. His mother and grandmother are loving, but ultimately trust the school more than they trust Dujuan. It becomes more apparent why he skips school and tosses his teacher’s keys. These bad choices are his way of dealing with adults chronically failing to meet his needs.

After the school makes a life-altering decision, his mother and grandmother decide to send him to live with his father, who lives on a reserve, analogous to America’s reservations. The hope is that the proximity to his true culture, and paternal influence will bring a positive change. When his grandmother visits to see if he’s okay, the fact he misses his grandmother dearly is etched on his face but he seems to be where he wants to be. “What I want,” Dujuan says wistfully, “is a normal life of just being me. And what I mean by me is, I want to be an Aborigine.”