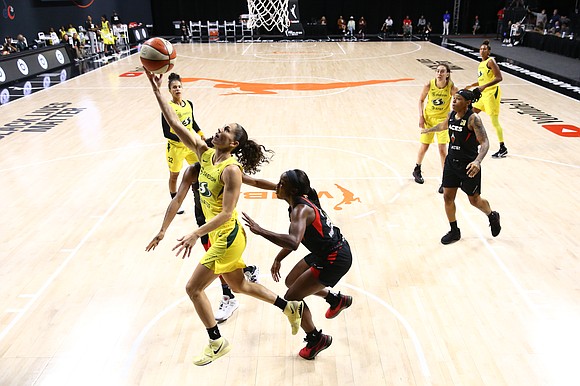 The Seattle Storm came out swinging and swept the WNBA Finals over the Las Vegas Aces 3–0. The third and final game was 92–59. With 26 points and four rebounds Breanna Stewart was named MVP of the Finals, a familiar spot for Stewart, who also earned that honor when the Storm won the WNBA title in 2018.

With this win, the Storm equals the four titles of the Houston Comets and the Minnesota Lynx. The big difference is that unlike the Comets, which won its four titles in consecutive years, and the Lynx, winning four titles in a six-year period, the Storm’s titles have spanned 16 years and four different coaches. The common denominator in all four Storm championships has been point guard Sue Bird, who turns 40 next week.

“In a championship, you have to bring everything. Sue knows what it takes,” said Simone Edwards, Bird’s teammate on the 2004 championship team. “She’s still a player that has a lot of confidence on court.”

Edwards said Bird is the master of the assist, possessing incredible court vision. “Sue’s a player that’s going to set you up and you better be ready in terms of scoring,” said Edwards. “And she can shoot. She’s a well-rounded point guard…She’s definitely one of the best point guards of all time.”

The final post-season awards have been given out. Los Angeles Sparks forward Nneka Ogwumike is the recipient of the 2020 Kim Perrot Sportsmanship Award. Named for the late point guard that played a huge role in the Comets’ first two WNBA championships, the award is presented to a player who exemplifies the ideals of sportsmanship on the court, including ethical behavior, fair play and integrity.

That’s a wrap on the wubble. Thankful it happened, but looking forward to a more traditional season in 2021.