TouroCOM honored for diversity and inclusion 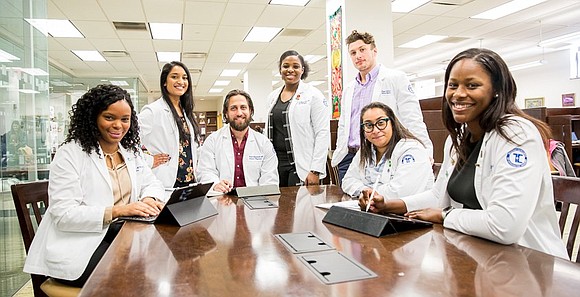 Touro College of Osteopathic Medicine today received the 2020 Health Professions Higher Education Excellence in Diversity (HEED) award for its outstanding commitment to diversity and inclusion. The announcement marks the third time the school has received the award, bestowed annually by INSIGHT Into Diversity magazine.

INSIGHT is the oldest and largest diversity-focused publication in higher education. As an award recipient, TouroCOM will be featured along with 45 other schools in the magazine’s December 2020 issue.

“We are extremely honored to be receiving the HEED award, which highlights TouroCOM’s mission to increase the number of underrepresented minorities (“URM”) in medicine and train osteopathic physicians to practice in underserved areas,” said Dr. Alan Kadish, president of the Touro College and University System. “The urgency of this mission is underscored by the coronavirus pandemic, which is exposing the tragic health care disparities in underserved communities like Harlem, where TouroCOM was founded 13 years ago.”

TouroCOM is a national leader in matriculating URMs, according to the most recent data available from the American Association of Colleges of Osteopathic Medicine (AACOM). In fall 2018, the latest semester for which comparative data is available, URMs made up 28.1% of the entering class at its flagship Harlem campus and 22.6% of the entering classes at its Harlem and Middletown, N.Y. locations combined. Enrollment at the nation’s 40 osteopathic schools combined averaged 9.6% for the same semester, according to AACOM.

Additionally, about half of TouroCOM’s graduates who have gone on to residency have ended up in the much-needed primary care specialties. As of 2019, close to one-third took up residencies in underserved communities or primary care shortage areas.

“Many studies have shown dramatic disparities in health care outcomes among ethnic minorities. These include asthma, infant mortality, stroke and heart attacks. Other studies have noted improved outcomes when the treating physician is of a similar ethnicity as the patient,” noted Dr. Kenneth Steier, TouroCOM’s executive dean and dean of the Middletown campus. “We are deeply appreciative of this recognition of our commitment to diversity, which improves learning, empathy and helps create a culturally competent workforce.”

A key factor in TouroCOM’s success is its one-year master’s program in biological and physical sciences that prepares students for the rigors of medical school. Master’s students who do well are eligible to join the next year’s medical school class. Nearly half of the school’s 211 URM physician graduates to date have come through the master’s pipeline.

TouroCOM also mentors and conducts outreach with minority students from local high schools to encourage them to pursue health careers. Its successful two-year afterschool program for Harlem high school students, “MedAchieve,” won the STEM award from INSIGHT Into Diversity this year and last.

Also integral to its success is the TouroCOM-Harlem Community Advisory Board, which provides guidance, scholarships and liaises with the community. Additionally, peer tutoring and extensive community outreach through free health fairs and other support are provided for youth, women and families. For its efforts, TouroCOM has received the “Spirit of the Heart” award from the Association of Black Cardiologists and the Community Service Award from the NAACP Mid-Manhattan branch.

Touro is a system of non-profit institutions of higher and professional education. Touro College was chartered in 1970 primarily to enrich the Jewish heritage, and to serve the larger American and global community. Approximately 18,000 students are currently enrolled in its various schools and divisions. Touro has 35 campuses and locations in New York, California, Nevada, Illinois, Berlin, Jerusalem and Moscow. New York Medical College; Touro University California and Touro University Nevada; Touro University Worldwide and its Touro College Los Angeles division; as well as Hebrew Theological College in Skokie, Illinois are separately accredited institutions within the Touro College and University System. For more information, visit www.touro.edu.