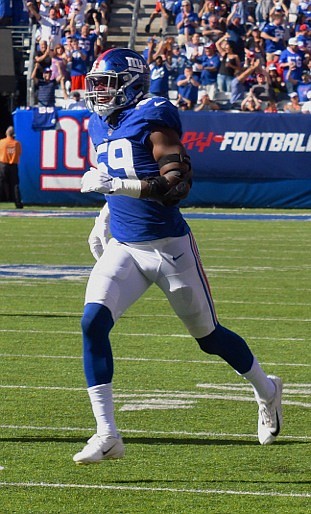 The Giants have normalized losing. It’s not as if they’ve resigned themselves to being terrible. They are trying. Some games are more competitive than others. Yet the outcome remains the same. The Giants are now 0-5 this season after falling to the Dallas Cowboys 37-34 last Sunday on the road.

Incredibly, in the horrid NFC East, a win would have put the Giants in contention for the division lead. The Cowboys are in first place at 2-3 with the 1-3-1 Philadelphia Eagle and 1-4 Washington occupying second and third place respectively.

Instead, Cowboys kicker Greg Zuerlein barley slid a 34-yard field goal through the uprights as time expired, sending the deflated Giants off of the AT&T Stadium turf wondering when the misery of not experiencing victory would end.

“Yes, this one hurts because we feel like we could have won that one,” said Giants defensive back Logan Ryan after the defeat. “We didn’t play well enough to win. The turnovers, the penalties, and the bad defense before the half and at the end of the game. We have to execute better.” The Giants had eight penalties for 81 against the Cowboys and lost one fumble.

Although Ryan, an eight-year veteran, encapsulated a singular game, his description summarizes the Giants’ flaws over the past several seasons. They are 12-41 since the start of their 2017 schedule. Ryan, a Rutgers product from Berlin, New Jersey, hasn’t been around for most of those losses. He was signed by the Giants in September on a one-year deal after previously playing for the New England Patriots and Tennessee Titans.

On Sunday, he was involved in a grim play in which the Cowboys’ starting quarterback Dak Prescott sustained a compound fracture and dislocation of his right ankle. With 6:46 remaining in the third quarter and the Cowboys up 24-23, Prescott took off on a designed draw play on first down from the Giants’ 27-yard line. Ryan pursued Prescott and brought him down by the shoulders.

As Prescott was falling, his right foot and ankle gruesomely twisted. Upon hitting the field, he quickly sat up and immediately clutched his lower leg. In a show of class and concern, Giants offensive coordinator Jason Garrett, who was the head coach of the Cowboys from 2011 until he was let go by the franchise at the conclusion of last season, stood with Giants head coach Mike McCarthy near Prescott as he was being tended to by the Cowboys medical staff. Minutes later, Prescott was carted off the field in tears, as players and coaches from both teams solemnly watched and extended words of comfort.

The 27-year-old rising star, who was second in the NFL last season in passing yards with 4,902, and is the league’s current passing leader this season with 1,856, underwent surgery late Sunday night.

“First and foremost, the worst thing that happened today was the Dak injury,” said Ryan in making his initial comments after the game. “I mean, it’s bigger than football. I feel terrible. It was a routine football play.

“He’s a hell of a quarterback,” Ryan expressed with obvious emotions. “That was nothing but a routine tackle with two competitors…I broke my leg two years ago. I came back a better player and I want to wish him well.”

The Giants, who host Washington this Sunday at MetLife Stadium, were also hit by a season ending injury when rapidly improving linebacker Lorenzo Carter ruptured his Achilles tendon early in the first quarter.

“Look, he’s an integral part of this team,” head coach Joe Judge said of Carter on Monday. “He’s a great dude in the locker room. He’s a blast to coach. The good news for him is they can do remarkable things with these injuries now to get him back on the field as soon as possible. That also being said, we won’t see him again this year.”