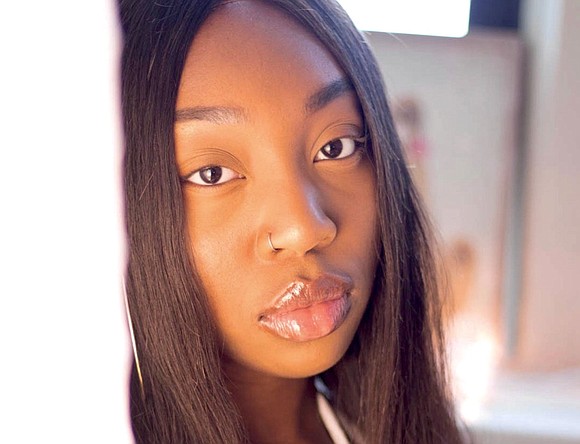 Amenze Osunde is an artist and illustrator whose work strategically showcases the regal nature of Black people in their many different elements. The Nigerian American 20 year-old who was born and raised in Brooklyn, New York specializes in sculptures, paintings (oil as well as water colors) and embroidery, which happens to be her favorite. It all started in 2014 when she was admitted into Fashion Industries High School as an art student. She later transferred to Edward R. Murrow, where her artwork reached new levels.

Osunde’s work has been displayed at the Scholastic Arts and Writing Awards building as well as the MET Museum. Currently she’s a freelance artist working with the art and business startup company, Crow. The focus is on representation of Black excellence shown beautifully for the community to see. While freelancing, she is also a part-time college student majoring in business economics with a minor in art.

Over the years one thing she yearned for was modern art in regards to seeing artists’ works from her generation. “In High School one thing I noticed was that teachers stuck with the status quo, teaching historical art like the Renaissance rather than political or modern art. We don’t learn about artists of today. Even museums are so outdated, unless you go to galleries where they show love to your local artists and people of today’s times, where museums just stay on the history. I’m inspired by my generation because I feel like the style of art has progressed over the years.”

The freelance artist recalls a Black male artist who captured her attention, taking classical European paintings and replacing the individuals with Black people, giving them a modern twist. For example, a man in the painting may be wearing Timberland boots. Art like this makes a huge statement while simultaneously paying homage to the Black culture in America. “It shows Black people in a great light instead of Black people in paintings putting on shoes for white people,” states Osunde, which she says she was tired of seeing.

Power is also what art is, according to Osunde. “You can either determine whether someone is looked upon as good or evil which brings me to Napoleon, who would have artists paint him as tall and ‘god-like’ though he was the complete opposite.”

With everything happening currently in the world, art is lastly a form of healing. Osunde does commission art and has work that is for sale. Some of her greatest artworks are self-portraits due to her love and fascination with studying people’s faces. Her favorite art piece that she has done was the most recent self-portrait piece called, “Black Woman” because it depicted how she felt during the BLM movement in regards to Breonna Taylor.

Her work can be seen on www.amenze.squarespace.com and her art page on Instagram is @a.menz.e.