Broadway for Biden: ‘A Concert for the Soul of the Nation’ free & live Oct. 21 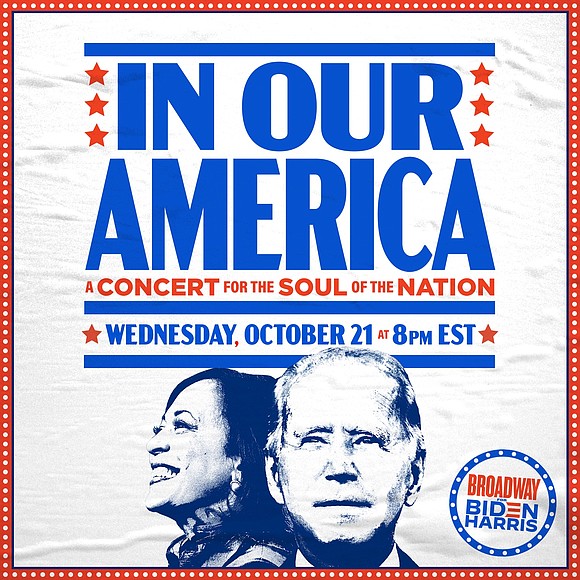 "In Our America: A Concert for the Soul of the Nation"

This is the most important election this country has faced in my lifetime. Under Donald Trump’s leadership the country is dying, ill, suffering, unemployed and divided. The theater community understands so well what is at stake in this election and that’s why the Broadway community is coming together for a one-night-only event Wednesday, Oct. 21 at 8 p.m. as Broadway for Biden holds a fundraiser titled, “In Our America: A Concert for the Soul of the Nation,” which will be presented for free on YouTube via news publisher NowThis, on Facebook via Broadway for Biden and NowThis, and on Broadway Unlocked. Broadway for Biden, a grassroots volunteer organization with an online presence, is activating the national theater community and the fans who love it by hosting one-of-a-kind events, disseminating information, and amplifying the stories of individuals within the theater world’s diverse community to build connections and humanize the issues at stake in this year’s election.

“Our theaters and entertainment venues may be currently dark, but our role is easy to see: we must support Joe Biden and Kamala Harris to ensure their unequivocal victory in November,” Tommy shared.

The concert will feature an array of original material being created for the evening, including never-before-seen stagings of beloved Broadway musical numbers, previews of Broadway-bound productions, and speeches that acknowledge the stakes of the present with a hopeful eye toward a better future. “In Our America” will include writing by Chad Beguelin, Pulitzer Prize winner Tony Kushner, two-time Pulitzer Prize winner Lynn Nottage, Robert O’Hara, Stacey Rose, Aurin Squire, DeLanna Studi, Pulitzer Prize winner Paula Vogel and John Waters.

“In Our America: A Concert for the Soul of the Nation” will be hosted by Broadway Unlocked and will stream for free on YouTube.com/NowThisNews and the Broadway for Biden and NowThis Facebook pages. Donations to the Biden Victory Fund are encouraged.