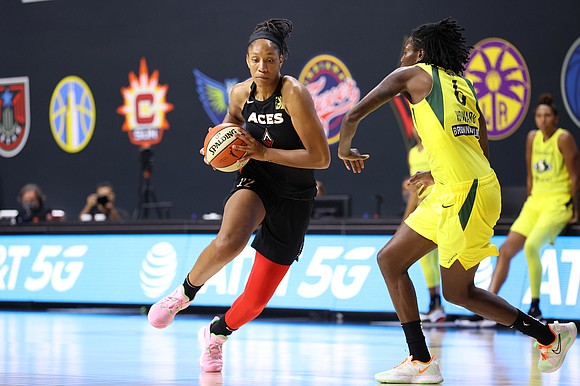 Last night marked the Women’s Sports Foundation’s (WSF) annual Salute to Women in Sports, which took place online for the first time. The annual gala has always served as a testament to the power and impact of sports participation.

This year’s Wilma Rudolph Courage Award was presented collectively to the players of the WNBA. This award is presented to the athlete or team that has exhibited extraordinary courage in their athletic performance, demonstrated the ability to overcome adversity, made significant contributions to sports and served as a role model. The award was accepted by New York Liberty guard Layshia Clarendon, a member of the WNBA Social Justice Council.

Clarendon has been a ferocious advocate for social justice and equality. She is unapologetic in who she is and provides support for other athletes who choose to do the same. Her prominence in the WNBA’s season-long advocacy for racial equality and social justice makes her a worthy representative of the league.

Female athletes have long been on the front lines of the quest for equality, starting WSF founder Billie Jean King’s quest for pay parity in the early 1970s. Obviously, enormous gains have been made, but women cannot take their eyes off this difficult road. Changes in the judicial system may impact Title IX, which has been so crucial to women’s participation in intercollegiate athletics.

This year, the WNBA stood with the players, but it was just four years ago that the league attempted to levy fines against players who wore #BlackLivesMatter t-shirts in game warmups. Those fines were rescinded, but we cannot forget that was the initial reaction to player activism. The progress that has been made is outstanding and must continue.

The Billie Jean King Leadership Award recognizes an individual or group who demonstrates outstanding leadership and makes significant contributions to the advancement of women through achievements in sport and the workplace. This year’s honoree is Ursula Burns, former CEO and chair of Xerox. Earlier this year, Burns helped launch The HistoryMakers’ WomanMakers initiative with a $1 million gift.