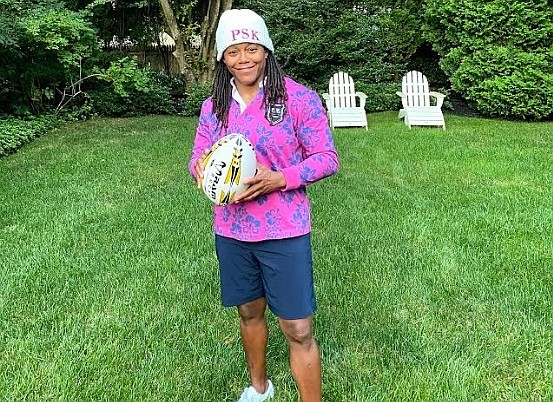 At last night’s Women’s Sports Foundation Salute to Women in Sports, presented virtually by Yahoo! Sports, Phaidra Knight, a member of the World Rugby Hall of Fame (the first African American and eighth woman inducted), was introduced as the organization’s president-elect. Knight has served as a WSF trustee since 2018 and has been associated with the foundation for more than two decades.

“I’ve been part of the foundation since 1997 when I started as an advocacy intern under Donna Lopiano [former executive director],” said Knight, whose one-year term will begin in January 2021. “From that time, I fell in love with the mission and stayed close.”

The mission is to unlock the possibilities in every girl and woman through the power of sport, and there was a time when Knight was discovering just that. While attending law school, she discovered rugby and it proved to be life-changing. Although always athletic and active—even receiving athletic scholarship offers in basketball—rugby proved to be her passion.

“A couple of years after I started playing rugby, I found myself on the U.S. team,” said Knight, 46. “The message is it’s never too late to even get to a world class level. Fast forward to today, I started training for mixed martial arts about a year and three months ago. My goal is to make it to the professional ranks and be a world champion.

“Some people still have the urge to continue [competing],” she added. “I’ve been fortunate to bring people into my circle that have helped me maintain the pliability in my body and keep the skills up. I’m going at this as hard as I did at rugby when I first started playing.”

For the past 10 years Knight has been involved in WSF events as well as lobbying in Washington, D.C. in support of girls’ and women’s sports. She has also participated in clinics. A sought after speaker and TV rugby analyst, this year Knight launched PSK Collective, a fusion of activewear and streetwear for girls and women.

“The line is going well. Not including myself, we have 10 outstanding ambassadors for the line,” said Knight. Among the brand ambassadors are Olympic bobsledder Aja Evans, Paralympian Alana Nichols and Olympic water polo athlete Kaleigh Gilchrist. A social justice mission grounds the company, Knight said.

“For me and the ambassadors, we want to be able to provide opportunity,” Knight said. “We give back 15% of our net proceeds through the clothing line to charity. For the next 12 months it will be the WSF…As we grow as a company, we will expand the giving and the number of organizations.”

She is also the founder of PeaK Unleashed, a non-profit organization devoted to cultivating personal and physical development of marginalized youth through rugby and yoga. The program is currently in several correctional facilities and youth shelters.