The LeBron vs. Jordan debate should extend beyond the basketball court 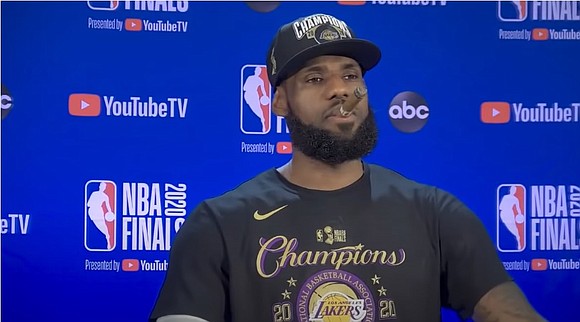 LeBron James celebrates with a cigar after leading the Los Angeles Lakers to the NBA title on Sunday night.

LeBron James won his fourth NBA title on Sunday night in an illustrious career that has spanned 17 years and counting, leading the Los Angeles Lakers to a 106-93 win over the Miami Heat in Game 6 of the Finals and a 4-2 series victory.

In averaging 29.8 points, 8.5 assists and 11.8 rebounds, James became the first player in NBA history to win a Finals MVP with three different franchises. He earned back-to-back awards with the Heat in 2012 and 2013, and another with the Cleveland Cavaliers in 2016. The Lakers also equaled a notable mark, capturing their 17th championship, which ties them with the Boston Celtics for most ever for an NBA organization.

An ongoing debate among journalists and sports fans is comparing the greatness of James and Michael Jordan. Wherever sports conversations take place, it has been a hot and contentious topic for years. Jordan appeared in six Finals with the Chicago Bulls and was named MVP in every one of them. His teams were 6-0 and never played a Game 7. James is now 4-6 in 10 Finals. This column could run several pages juxtaposing their individual statistics, which have been measured, matched and contrasted endlessly.

Before the NBA resumed its season in July in a contained environment at the ESPN Wide World of Sports Complex close to Orlando, Florida, after being shut down in March due to the novel coronavirus pandemic, this writer opined that the 2020 season should neither add to nor detract from James’ legacy, irrespective of the outcome. It should be viewed as a stand-alone season or a tournament similar to the Olympics.

The accomplishments should not be vastly depreciated as the challenges James and his NBA brethren faced were unique and unprecedented. Yet, paradoxically, it is for that very reason this season’s championship should not be ascribed the same significance as all the other past titles.

Jordan is still widely viewed as the greatest player to ever live. Nevertheless, James has numerous backers who place him at the top of their list. It will forever be a subjective exercise in trying to definitively settle the indeterminable.

A topic that is just as compelling is James’ and Jordan’s impact on society. During his playing career, Jordan was one of, if not the most popular person in the world. Over a period of eight years, from 1984 when he entered the NBA out of the University of North Carolina, to leading the 1992 U.S. Olympic Dream Team, Jordan became a global icon and ubiquitous brand, elevating Nike to the most recognizable company on the planet. He inspired a generation of athletes across the sports spectrum, perhaps more than anyone since Muhammad Ali.

Kobe Bryant and later James were driven to surpass Jordan’s basketball brilliance, and in doing so further extended the global reach of the NBA, thus raising its economics to mind-numbing heights. But a glaring distinction between James and Jordan is the latter was decidedly apolitical in his playing days while James has emerged as one of America’s most influential and outspoken voices for racial justice, educational equality and the fight against voter suppression.

He has been fearless in criticizing President Donald Trump, consequentially becoming a prime target of vitriol from Trump and his right wing sycophants. In recent years has been overtly enlightened and emboldened. Now the owner of the Charlotte Hornets, James has provided his voice and riches to social causes.

In June, in the aftermath of the killing of George Floyd that ignited global protests, Jordan and Jordan Brand apparel pledged $100 million to organizations committed to social justice, racial equality and increased access to education.

Age is relative and James, 35, and Jordan, 57, are still young. Hopefully they will be divinely bestowed many more years to help change the course of this country for the better. Discussing who between them is leading this charge is more important than which one has had the better basketball career.