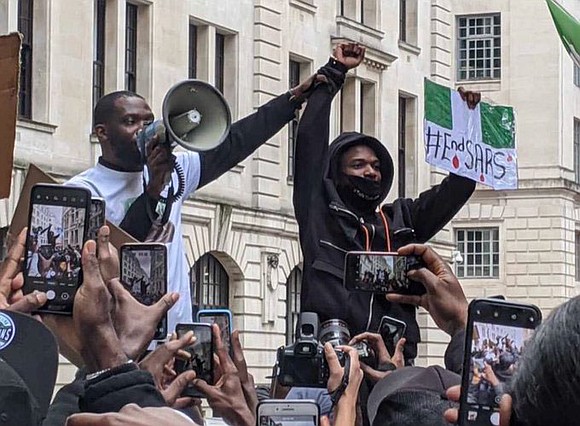 The Muhammadu Buhari government of Nigeria has bowed to the demands of protestors seeking the “immediate dissolution” of the Special Anti-Robbery Squad (SARS), which has been accused of unlawful arrests, extortion, torture and the murder of many young Nigerians.

The latest round of protests was prompted by footage of officers pulling two men out of a hotel in Lagos into the street and shooting one of them.

The footage, leaked to the media, provoked outrage and led many to share stories of brutality by the unit, which has developed notoriety for unduly profiling young people, the BBC’s Nduka Orjinmo in Abuja says.

The Inspector-General of Police, Mohammed Adamu, announced the dissolution of the dreaded police formation which comes on the heels of the #EndSARS protests nationwide. He said a team of investigators––including neighborhood organizations and human rights bodies––would be set up to investigate alleged abuses by SARS.

Nigerian pop star Ayodeji Balogun, popularly known as Wizkid, called the action the beginning of a new Nigeria. But there are worrying signs, writes Mayeni Jones, Nigerian correspondent for the BBC. “The dissolution of SARS came with one important specification: the officers from the controversial police unit will be redeployed. It’s unclear where to. That’s crucial because although the protest started off as a call to disband SARS, it has expanded to include the wider Nigerian police force.”

Abuses carried out during the protests, including beatings, intimidation and the disproportionate use of force against demonstrators, were all carried out by policemen who did not belong to SARS, activists pointed out..

“For them,” continued Jones, “what’s needed is a total overhaul of policing in Nigeria. It’s also unclear whether any officers will be prosecuted for past abuses, something rights group Amnesty has said is crucial to ensure justice for the alleged victims.”

Speaking to a group of protestors, Wizkid continued: “This is just the beginning!! We won our fight to #ENDSARS .. now Reform the Nigerian police!! We deserve good governance! #Endpolice brutality!”