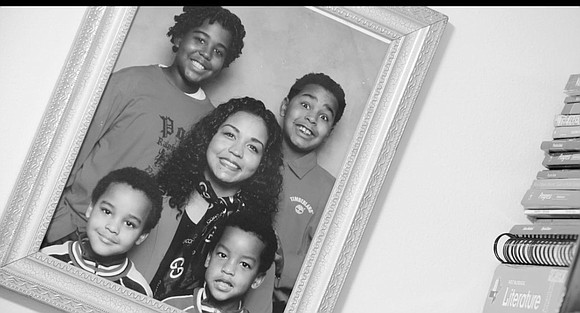 You can’t make this up. The truth is always more unbelievable than anything that a Hollywood screenwriter or novelist can conceive.

Make no mistake: High school sweethearts Fox Rich and Rob G. Rich did the crime. They attempted to rob a bank to pay for mounting bills accumulated in life and to help, in part, to pay for the hip hop apparel business that they opened in Shreveport, Louisiana.

I think I know what you are thinking. I thought the same thing. Were they high? What on God’s green earth could have ever made these two young people of color think, for a second, that they could get away with this is beyond my understanding. But they did it and this stunning and substantive documentary “Time” does not pull any punches (at all) about what happened after that foolish, foolish, foolish act.

What is time? The question runs throughout the entire telling of Fox Rich’s fight to keep her family together. My God, she’s a fierce woman raising six sons, paying her bills, doing activist work—while her husband, Rob, serves a prison sentence of 60 years. Director Garrett Bradley exposes systemic inequality producing the same nausea one would expect when revealing a hive of bees in your pantry, or a nest of rats in your closet, or a colony of ravenous roaches hiding in the walls of your house.

Systemic inequality is what almost killed these two people who began their life with a bucket full of hopes and dreams fueled by hard work and raw ambition.

They met in 1997, high school sweethearts who poured their entrepreneurial passions into opening the aforementioned hip hop apparel business in their hometown. It’s Fox’s voice that tells their story and we learn that the couple struggled and that more than anything, that not wanting to fail is what drove them to make such a God-awful decision. So it’s not just stupidity that moved them to attempt to rob a bank—Fox says it was desperation. “Desperate people do desperate things. It’s as simple as that,” she offers on why they performed such a knucklehead move.

Here’s how it all went down. Rob and his younger cousin robbed a credit union. Fox was the getaway driver. They were caught as any sane person would know would happen before doing such a damaging act.

They all went to jail. Fox went to jail after her twins, whom she named Freedom and Justus, were born, and she served three and a half years. But her husband, Rob Rich, was sentenced to 60 years without the chance of parole and, at the time, any hope of sentencing mitigation.

Now we have to remember this is Fox Rich’s story. It was her passion that helped change his fate. It was her energy that helped her navigate through the tangled weeds of justice (or rather, injustice) that is America.

Time is against Fox. It’s her deadly enemy working against her with extreme prejudice but it’s also poised as her savior if she can stay glued together.

“Time” concentrates on the injustice that Rob is experiencing, being given such a harsh sentence. The film, focusing on the passing of time, highlights the issue that when Rob returns, his boys will be grown men with perhaps children of their own.

Bradley does not deliver a boring experience. He deftly uses home videos and other archival footage, weaving them with music and natural sounds that provide the viewer with a sense of place and time. What we remember. How we remember it. Bradley won the best director prize at the Sundance Film Festival and it’s an interesting point that the film is a co-production of The New York Times.

Fox moved her sons closer to the Louisiana State Penitentiary, also known as Angola, and didn’t stop teaching herself everything she needed to know about prison reform. She took her talk on the road, speaking wherever the spirit leads her.

Her home-video footage brings her story front-and-center. We can’t help but feel her anguish. We empathize that her beloved is suffering. Does time heal all wounds? I think the answer to that, in this case, is still very much in the air.

Fox’s faith is beyond the proverbial mustard seed that is required (or so we are told) to move an entire mountain. She has enough faith in her love, her husband and her family to shake the very fabric of time itself.

And she’s not just fighting the corrupt criminal justice system, she’s got that sting and slap coming from her mother, Ms. Peggy, who appears from time to time providing that sage wisdom, culled from a long life lived; she hopes to instill in her daughter that “Right don’t come from doing wrong.”

Peggy naturally helped raise the boys who have all grown up to be sturdy men. What’s the timeline of their father being released from a 60-year sentence? Will he serve the full measure of the unjust time?

We get an answer in a rewind, a kiss, a stolen moment told through archival footage before there was a crime, before either of them was crushed under the weight of time.

I won’t spoil the ending. It’s heartbreaking and it should be experienced, so take the time and watch “Time” and ponder the impact of so much loss.

“Time” has a global launch on Prime Video Oct. 16.