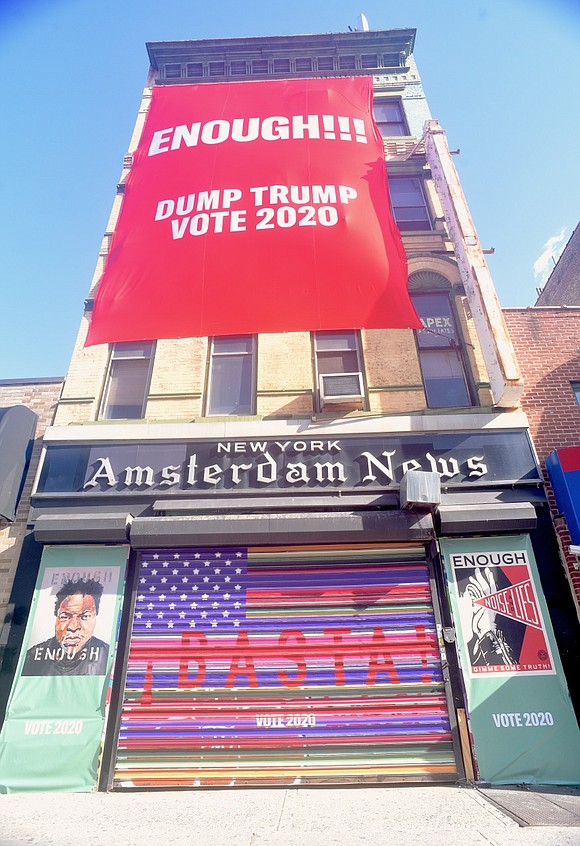 A progressive advocacy organization and the oldest Black-owned newspaper business in the country have announced the completion of a new art installation.

People for the America Way and the New York Amsterdam News, unveiled new artwork adorning the front of the AmNews’ offices as part of the “Enough of Trump” campaign.

The installation includes images from some of the most prominent Black and Brown artists around including Carrie Mae Weems whose work covers the entire front facade of the AmNews headquarters in Harlem.

“America is at a tipping point,” stated Weems. ”Either we move forward by electing Joe Biden, or we continue to regress with four more years of Donald Trump. It is that simple.”

In a statement, People For the American Way President Ben Jealous said he was excited for the art installation and ready to remove the current president from office in November.

“Today, we are three weeks away from the most important election of our lifetime and for an historic Black newspaper to blanket their building in ‘Enough of Trump’ art, in the middle of Harlem, sends a clear message to the nation and the world that people have had enough of Trump,” said Jealous. “The issues driving the mostly Black artists and artists of color who are participating in the ‘Enough of Trump’ campaign, include his continued mismanagement of the COVID-19 pandemic, his blatant racism, and his unconscionable encouragement of violent and deadly policing.”

The national ENOUGH of Trump campaign, is part of a People For the American Way project that features work from 17 different artists that have been shared on multiple platforms. Amsterdam News Publisher Elinor Tatum hopes the artwork’s brought to light the importance of voting.

“Art has always been an influential tool in creating social change,” said Tatum in a statement. That’s why I’m thrilled to partner with People For the American Way and its ENOUGH of Trump campaign at this critical time. Given the stakes in this historic election, it is more urgent than ever to inspire voters to transform their dissatisfaction over the increased polarization of this country, and the racism that this administration is perpetrating, into votes on Election Day.”