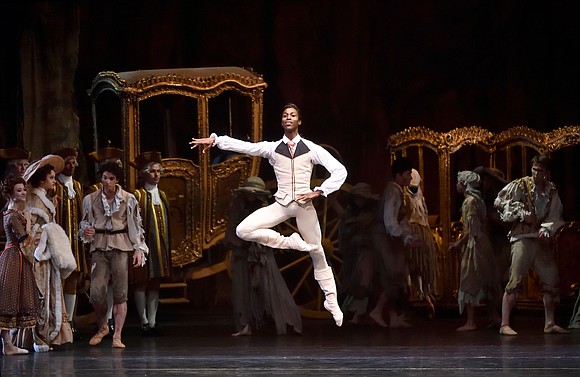 With a name that captures the first word that comes to mind when he appears on stage, Royal has wowed audiences and critics alike with the clarity of his technique, his mesmerizing musicality and his pitch-perfect portrayal of a choreographer’s intent, a character’s persona or both. As Von Rothbart, the evil sorcerer in “Swan Lake,” Royal saunters onstage infusing each movement with a dazzling dash of devilish electricity. In “Serenade After Plato’s Symposium” his intelligent interpretation of the choreographer’s intent infuses movement with poetic meaning and his luscious fluidity transforms air into water as he moves with the effortless ease of a swimmer.

Royal says that he relished being able to “embody those characters bringing some of my life and my experiences that allow me to be me but also the character so it’s like a weird dichotomy of myself being myself in the role but also taking the character to that next level. It’s something that I love so much developing those characters and making them special and unique and not a copy of the way so-and-so did it. I always want to bring something that I have within me.”

While it is this marriage of technical brilliance, dramatic nuance and sheer magnetism that has propelled him, Royal confided during a phone interview that the path that led to this moment had its ups and downs. “Before I started studying ballet, I did this community project, ‘The Chocolate Nutcracker.’ That was my introduction to dance. We did hip hop, jazz, West African dance. I just loved it. I loved the music, the feeling of community and learning new things.” Then while studying music in middle school he decided to join friends from that production and successfully auditioned for the High School of Performing Arts only to win a scholarship to the summer program at Philadelphia’s prestigious Rock School where he pushed his body to make up for the time he had lost by starting to dance at the ripe old age of 14. The effort paid off and his teacher entered him into a series of dance competitions that led to his being spotted and offered a scholarship to ABT’s JKO School. And the die was cast. But it wasn’t always smooth sailing.

“It was challenging on many levels, not just being the only Black kid in my class but being away from home for the first time, having to pay my own bills, cook my own meals. I would go to school in the morning then take the train downtown to ABT studios in the afternoon. I felt this sense of, ‘Ok I’m an adult now at 17.’ That’s a lot to kind of settle in with. Then, despite the longing for a sense of community, knowing that I came here because I have something that got me this scholarship to be here.” Driven by a sense of purpose, he began to ascend and get more attention, even getting into the ABT Studio company. While it was a lot to juggle, Royal says, “I always knew that because I didn’t see people who looked like me at the top, I wanted to get there so I could help to bridge that gap and open that door.”

Still floating on a cloud after his historic promotion, Royal shared his thoughts in a phone interview during a rehearsal break in what ABT has created, thanks to a combination of quarantine and testing to be a COVID-free bubble in upstate New York. “I’m here working on a new Christopher Rudd duet with Joao Menegussi and it’s been such a great experience to actually come to the studio and have what feels like a normal day again,” he says chuckling.

While COVID-19 has shifted the way dancers work, it hasn’t stopped them from working. But, Royal says, when this new reality set in it was overwhelming. “Back in March we were on tour in Orange County and I was gearing up to premiere as one of the principal characters in our new production of Ratmansky’s ‘Of Love and Rage’ and I sprained my ankle on my last dress rehearsal prior to the opening so I didn’t get to perform there. Then we came back to New York and that’s when everything started to close down and the ABT season was cancelled.” At first, the bit of down time allowed his body to heal and recover but, he says, “On the other hand I was so excited that I was going to be debuting as Romeo in ‘Romeo and Juliet’ and Albrecht in ‘Giselle’ and getting to dance with Misty. There is so much I was looking forward to. It’s been a real roller coaster.”

He confides that with all of the ups and downs he didn’t give any thought to the possibility of there being promotions this season. Then, out of the blue it happened. “I was meeting with Kevin regularly, just checking in about going forward and how I was feeling and what the future could potentially look like in terms of repertoire and if we were going to try these smaller projects. He told me it was his intention to promote me in the spring. He was like, ‘I know you got this. You know you got this. I want there to be a feeling that there can still be movement even though the world has kind of come to a standstill.’”

This promotion is a huge moment both for Royal and for ABT, a company whose first and, until now, only Black male principal dancer was the amazing Desmond Richardson, now co-founder with Dwight Rhoden of Complexions Contemporary Ballet company. Royal was not alone in his promotion; the stunning Bolshoi-trained dancer Gabe Stone Shayer has been promoted to soloist.

Meanwhile, while waiting for the curtain to go up, Royal is honing his craft. “Unfortunately, Misty and I didn’t even have the opportunity to start rehearsals for ‘Romeo and Juliet’ prior to the season.” But, he did start working on the ballet. “I think just having that process of learning the steps, learning the musicality because the music compels you to make decisions, the music gives you so much freedom of how you feel and express in certain scenes. Then after you’ve learned the steps, you find yourself in the role. What is Romeo in the text versus who do I want my Romeo to be. This process for me has this sense of self-discovery, you know as this young kid who goes on this journey of becoming a man and what are the underlying things he has to overcome to go from being this dreamer to a man of action. That process of learning Romeo is in many ways a direct reflection of my journey of my life growing up in this company and finding what it is that I want to say as an artist and becoming this man of action and this leader. Yes, that’s what this whole process is like for me.”

And, along the way there have been role models, mentors, people he has looked up to who gave him hope, something he hopes his promotion gives to others. “I remember when I was back home in the performing arts high school, dance history classes were part of our curriculum so I learned about all of the historical figures in ballet like Arthur Mitchell, Mel Tomlinson, Ronald Perry and John Jones, and other Black pioneers who have contributed so much to this art form, like Alvin Ailey and Judith Jamison. Arthur has been like a lighthouse. Knowing what he, as a ballet dancer, had to go through to prove and represent at that time in our history yet to overcome and then create the Dance Theatre of Harlem. That is iconic. His story even to this day has propelled me to continue to see how much more I can do and how many more people I can bring to this thing called ballet.”

Calvin Royal III says becoming a Principal with ABT isn’t just about a job promotion. “It is important for me to show that it’s possible to be here and that there should be more Calvins and more Mistys, more dancers of color in these organizations and institutions because their stories should be told, too. There have been so many conversations about Black dancers in classical art forms and to those who ask why, I say why not.” Underscoring the importance of diversity, he points out that this means all kinds of diversity. “ABT Artistic Director Kevin McKinzie has commissioned African American choreographer Christopher Rudd to do a new duet on two men in an interracial relationship showing gay love and gay lust. That’s a story we haven’t seen on the ballet stage. It’s been done in other arts’ mediums but I feel like it’s important for this art form to continue to expand and evolve to represent and reflect our society today. After all if the art form is to keep from going stale, if it’s to continue to grow, we all have to be part of the conversation.”