Med students share: Why I want to be a doctor now 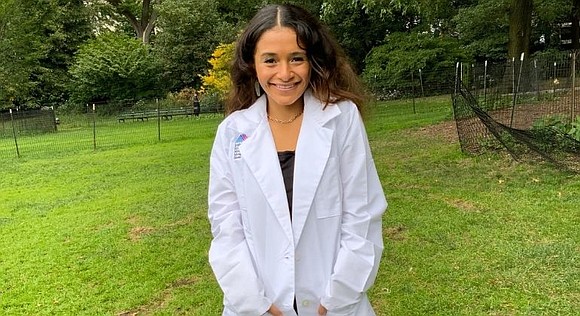 The White Coat ceremony represents a rite of passage, launching first-year medical students on their formal careers in a gathering of faculty, colleagues and family. In this era of social distancing, the Icahn School of Medicine at Mount Sinai’s White Coat ceremony took place via Zoom Tuesday, Oct. 13.

But why become a doctor now, in a pandemic, when providing care can be potentially life-threatening to the clinician? Incoming students describe what makes them want to help and heal, and the oath they have written together—at this unprecedented time in the history of American medicine—as a guide to their future careers as physicians.

Candida Damian, who is Black/Guamanian and was raised in Alabama, never went to the doctor as a young girl because her single mom could not afford health insurance. “All I knew about doctors was what I saw on TV,” she says. “I wanted to work and care for patients at an intimate level. It was in nursing school that I gained the exposure I needed to realize that I not only wanted to change careers to become a doctor, but I needed to do it so I could provide the level of care necessary for my patients.”

Candida says that inequities in health care have always been there but are just more visible now, making this a critical time to join the profession. “My deepest ambition as a doctor is to ensure that everyone, no matter who they are, has access to health care. As a Black /Guamanian future physician, who will represent diverse and under-resourced communities, it will be my duty to use my voice to advocate for change and to remove the barriers that I experienced as a young girl,” she says.

Jerrel Catlett says the pandemic served as a major turning point in his life and career. “I would say—as an African American—the pandemic has made me acutely aware of how vulnerable my community is,” he says. Teaming up with three other Icahn students, he developed an anti-racism discussion series open to faculty, physicians and hospital administrators across the Mount Sinai Health System to engage in small group conversations focusing on how anti-Black biases and prejudices manifest in medical practice and research. “I feel more empowered now because we are gaining the literacy and language to describe what is happening around us, and identifying ways to be a part of the solution.”

He wants to be a physician-scientist in pediatric oncology. Prior to embarking on the MD program at the Icahn School of Medicine, he worked at the Broad Institute of MIT and Harvard, and Dana-Farber Cancer Institute. However, it was the young patients he met conducting research in childhood bone tumors who started him on a medical career. “I was incredibly moved by the kids I met while shadowing at Dana-Farber,” he says. “The extent to which they seemed to be aware of the impact of their disease on themselves and their families at such a young age was heartbreaking, but they are among the strongest people I have ever met. Knowing them made me really want to help.”

Suvruta Iruvanti works as a volunteer at Mount Sinai’s clinic for the uninsured, the East Harlem Health Outreach Partnership, helping patients who require specialized care or financial assistance navigate the hospital system. Removing barriers and helping under-resourced patients obtain care has long been a career priority. As an undergraduate pursuing simultaneous degrees in Molecular and Cell Biology and Business at the University of California, Berkeley, he led a team of students into the northern Himalayan region of India to set up a clinic that would provide dental care for rural residents, many of whom had never seen a dentist.

Having studied prostate and ovarian cancer at the Broad Institute, he is interested in the possibilities of medicine to uncover new treatments for patients with advanced stage diseases. “The ‘why’ in disease has always intrigued me and propelled me toward medicine to find answers,” he says.

Suvruta, who took on the role of scribe in writing the school oath, says the writing process was remarkably smooth as groups came together to submit contributions, then collaborated on editing through remote tools. “Zoom is definitely a different modality, but we are still moving at the same pace even though we are not physically together.”

One of the positives of a virtual White Coat ceremony, he says, is that he can invite as many family members from as many far-flung locations as he wishes to witness his big moment, via Zoom.