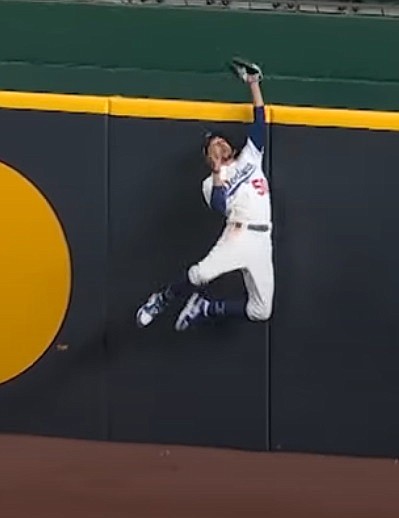 Cool Papa Bell, Willie Mays, Hank Aaron and Ken Griffey. All are considered among the best outfielders to ever play baseball. Bell, who roamed center field for St. Louis Stars and Homestead Grays among other iconic Negro Leagues teams from 1922 to 1946, finished his playing days one year before Jackie Robinson broke Major League Baseball’s color line. Yet his legendary career earned him an induction into baseball’s Hall of Fame in 1974.

The Los Angeles’ Dodgers right fielder Mookie Betts is continuing the lineage of great Black baseball outfielders. The former Boston Red Sox, who won a World Series title with the club in 2018, the same year he was named the American League MVP, has established himself as one of the best all-around players in the sport.

His performance in the National League Championship Series, in which the Dodgers defeated the Atlanta Braves four games to three in the best-of-seven matchup, as well as his stellar showing in Game 1 of the World Series, affirmed his status.

The 28-year-old native of Nashville, Tenn., was drafted by the Red Sox out of high school in 2011. He made his MLB debut in June of 2014 and subsequently became a star in Boston. The Red Sox, considering the certainty of having to pay Betts well over $300 million in free-agency, traded him to the Dodgers last February. The Dodgers showed no reluctance in signing Betts to a 12-year, $365 million deal this past July.

The four-time Gold Glove winner has lived up to the Dodgers’ expectations this postseason. He made three spectacular run-saving catches, one each in Games 5, 6 and 7 of the NLCS to help the Dodgers advance. In Game 7, the 5-foot-9 Betts’ leaping sixth-inning grab, reaching over the 8-foot right field wall at Globe Life Field in Arlington, Texas, to rob the Braves’ Freddie Freeman of a home run with the Dodgers trailing 3-2, arguably saved his team from elimination as they went on to a thin 4-3 victory.

“The one yesterday was probably the most important,” Betts said on Sunday of his Game 6 catch. “I think that we stopped their momentum for sure. But I think that today is probably my favorite because it was actually a home run.”

Braves manager Brian Snitker encapsulated Betts’ superior talent. “This guy’s one of the best players in the game,” Snitker said. “He’s so darned athletic with the things he can do.”

In Game 1 of the World Series against the American League Champion Tampa Bay Rays on Tuesday night, Betts’ mind, bat and speed did the damage in the Dodgers’ 8-3 win. He had two hits, including a solo home run, a walk, two stolen bases and two runs scored.

“He does a lot of studying to be able to create stress,” said Dodgers Manager Dave Roberts of Betts. “And whether it’s stealing a base or just being on base to make the pitcher speed up or not execute a pitch, he creates tension—and he’s just a heckuva ballplayer.”