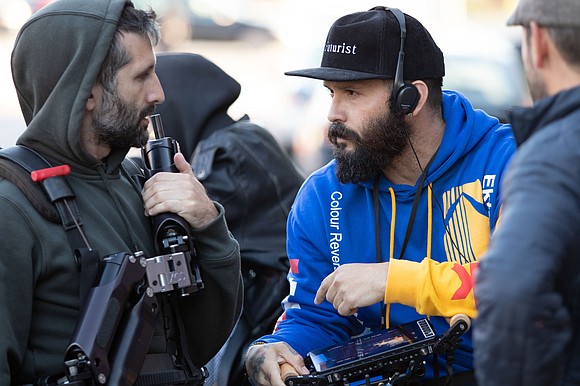 I am not wrong about finding new talent. I know what I know—and what I know is that director/screenwriter Angel Manuel Soto is the real deal.

You must remember his name. Allow me to help you. Angel. Manuel. Soto.

This Puerto Rican born director/screenwriter is one of those rising-like-a-comet talents that when he hits (and he will), it will feel like a meteorite has landed somewhere on planet Earth. It’s not just the technical skill that made me stop and push into “Charm City Kings,” it was the tenderness that was ever-present and that I knew was the result of a gifted visual storyteller.

(the Midnight Clique) but the story is told through the eyes of Mouse (Jahi Di’Allo Winston) who has a promising future ahead of him as a veterinarian. His drama is that he’s haunted by his brother’s death (his brother was also a biker) and the unrealistic ideals of masculinity forced on him by society.

Trapped between his hard-working mother’s expectations and the temptations of life on the streets, Mouse finds himself at a crucial turning point in his life.

It’s a feat, dancing between a cautionary tale and celebration of innocence, but it’s deftly handled by Angel Manuel Soto, a.k.a. my new best friend. Here’s a few facts about Soto. He was born in Santurce, Puerto Rico, the son of a car salesman and a flight attendant. He studied architecture and advertising which in retrospect makes sense since he filled each frame with the perfect balance of color and symmetry.

His journey has not been all roses and daffodils. He’s paid his dues and then some. Soto is so committed to his craft that he worked at Standard Style Boutique ( in Kansas City) and rented all the rooms in his house and slept on the floor for two months to save money to make his film “22 Weeks.” In Puerto Rico, he worked as a television producer and director, not letting pesky things like lack of financing stop him. He prefers guerrilla-style filmmaking to a maximum budget. He calls the Puerto Rican band Domino Saints his friends. His favorite directors are Alejandro González Iñárritu and Andrey Tarkoski.

In 2010, Angel directed “La Carta,” a moving short film that won awards in several festivals, exhibiting at Cannes Film Festival, Sundance Film Forward, La Havana Film Festival and Ridley Scott’s Your Film Festival. In the advertising world, his directing has garnered relations with clients such as U.S. Census 2020, NHTS, AT&T, DirecTV, Apple, Puerto Rico Tourism Company, Susan G. Komen, Medalla and Gatorade to name a few. His campaign for Gatorade in 2013 won the prestigious Cannes Lion. In 2015 he completed his first feature film, “La Granja,” which premiered at Fantastic Fest and competed in over 20 film festivals around the world, nabbing the award for Best Opera Prima at the Guadalajara International Film Festival and Grand Jury Award for Best World cinema at the Urbanworld Film Festival in NYC. In 2014 Angel began to push the boundaries of storytelling through Virtual Reality and joined RYOT, directing over 30 VR documentaries and overseeing production creatively.

During that time, his inspiring short documentary “El Púgil” had its world premiere at the 12th edition of the Tribeca Film Festival in 2016. In 2017 Angel created his VR film “Dinner Party” to much critical acclaim and success, winning multiple awards for Best Cinematic Experience all around the world and screening at the most coveted festivals such as Sundance, SXSW, Tribeca, Raindance and Webby Awards to name a few.

“Charm City Kings” won the Special Jury Award for Best Ensemble Cast at the Sundance Film Festival 2020 and is produced by Jada Pinkett and Will Smith, written by Barry Jenkins and Sherman Payne and stars Jahi Winston, Teyonah Parris, Will Catlett and Meek Mill.

In reviewing films, I watch it in three ways. First, without sound to determine if the director is a strong visual storyteller. Second, I listen to the dialogue to weigh the strength of the screenplay. Finally, I watch the film allowing myself to be moved by the performances forgetting, if the filmmaker is good, that I am even watching a movie. Angel Manuel Soto received four-stars in all three areas. He’s simply—amazing.

AmNews: Who are you? I am going to call you my brother from another mother, and father but brother nonetheless.

AmNews: Ok. Hold up. I know this laughter. Mr. Soto, not flirting or anything but you have a sexy laugh because I can hear the joy in it. Ok, first question. How did you get involved with “Charm City Kings”?

Soto: My agent at the time sent me a couple of scripts for me to respond to. The first [screenplay] one that got my attention was by Barry Jenkins and it was titled “12 O’Clock Boys.” Barry Jenkins is someone to follow and an amazing filmmaker that I learn every day from his work, but I’ve also seen the documentary “12 O’Clock Boys” when I was drawn by this world that was depicted by a very unique approach to me.

AmNews: The subculture of young bikers drew me in as well.

Soto: Exactly. I’ve never been to Baltimore before but I was very compelled by that subculture, so when I read the script that’s when everything went into focus and I was able to not only see a great story and see how a character is developed through a documentary but also with the sensibility of the way Barry Jenkins navigates masculinity with the characters.

Soto: But the one thing that I feel like I connected the most was with how similar we as people are. We have a saying back home: that the difference between us in the Caribbean and the African diaspora on the east coast, is a boat stop away. And with that in mind, the intersectionality in mind, I saw this story of millions of Puerto Ricans kids projected in the character of Mouse.

AmNews: I saw Mouse in the young people that walk around Harlem. So you connected with him?

Soto: I saw my story in the character of Mouse, I saw the same struggles and the journey to a distorted way of manhood and how that affects the decisions in their life in the character of Mouse. I moved to LA five years ago, I was born and raised in Puerto Rico my whole life. So I always wanted to tell the story of what it’s like to live in a colony, to live in a marginalized community. With the same obstacle that these kids have.

AmNews: We are the hope and the dream of this messed up country. Sorry, please continue your thought.

Soto: And then there’s a kid like who has the innocence—we always see stories like that on the news and stuff. We always see stories about innocent lives lost in the crime; the other one is the crime saga that we’re used to seeing is the kid with an ambition that joins the gang, but barely we witness what having that second chance looks like. At least, even if it’s a fantasy wouldn’t it be nice for us to involve ourselves in a fictional drama of what life can be if we do things right. We want to make things as authentic and rough as possible, but at the end of the day, we know how that story ends.

AmNews: How did you approach the work?

Soto: I like to do immersion with authenticity. If I feel like the city or locations are way more than just a backdrop or background or setting. I do feel like we’re all a construct of our environment or product of it…it’s authenticity—show the world and the people living in the world. I understand how noble it is for someone who has never been to a marginalized community to witness so much poverty.

AmNews: Can you compare Puerto Rico with Baltimore in any real way?

Soto: I come from a place that has been exploited for so long and misrepresented and vilified—that’s another thing that I saw of Baltimore—they are both painted in a negative way. They are often not given their opportunity to tell their version of things; that’s when I got the actors and the acting coach to try to represent an action but at the end capture the atmosphere and the resilience that exists within marginalized communities but are often overlooked by crime and all that drama.

AmNews: You accomplished that. Let’s talk about how you got a performance by rapper Meek Mills. I mean, bro, I salute you.

Soto: (laughing) He went on, he stepped to the plate and he delivered. It was like every movie process—it took him some time to get adjusted but once he did he owned it. He pushed himself to convey those deep emotions of vulnerability within a real front of toxic masculinity, and he was able to deconstruct those elements. I think that tapping into those elements is really what makes this story very different. Meek Mill, his life is pretty much the story of Blax in a way. He’s been on parole most of his life, and he had just gotten out of prison when he came in to do the film. So, if there’s anybody who has lived through the journeys of one of those characters—besides Chino, Queen [played by Lakeyria Doughty] and the other actors from Baltimore who pretty much are playing themselves—it is Meek Mill playing the character of Blax.

AmNews: Will Smith and Jada Pinkett Smith are executive producers. You don’t play, do ya! How did that happen?

AmNews: Let’s talk Hollywood. I can’t believe that you didn’t get pushback on the ending? Am I right?

Soto: You are right. It’s a different ending—I think it’s the closest thing to a Hollywood ending, one of the things that we always had on set was that if we wanted to make this a cautionary tale—someone like Mouse would have been shot and we already know that’s what happens to these kids and they know that. What they don’t know is what it could be with a little bit of mentorship and a little bit of love.

AmNews: Love is the key to everything. I’m not a kiss-ass but I do want to say this, Angel Manuel Soto. I see great things above-and-beyond the accolades and the awards coming your way. I know that storytelling is stitched into your DNA just like Puerto Rico and that you must do what you are doing and no matter what, you will follow that great big, beating heart.

This interview has been edited for length and clarity.