Stony Brook revving up for another great season 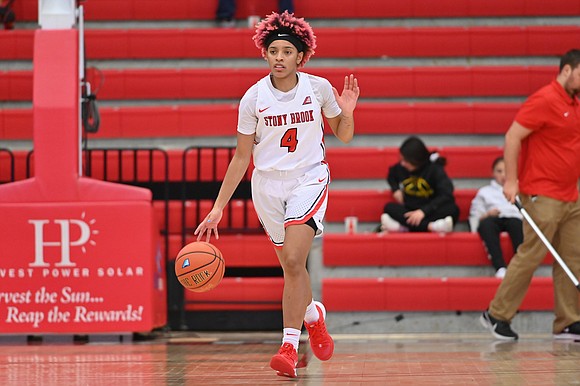 Last season, Stony Brook University women’s basketball had the hardwood pulled out from under them when the America East conference tournament, which the Seawolves were hosting, was cancelled before the semi-final game.

“The returners are hungry,” said coach Caroline McCombs. “Five seniors graduated. Those roles will have to be filled. Everybody has a different role and a different personality for each team and each season. Those seniors [last year] wanted to leave a mark on the program, and they definitely did.”

The returning players, freshmen and transfer students began coming back to campus in early August. All had been working out on their own, but it wasn’t the same as being in the weight room and on court. McCombs said they were all in relatively good condition, but the team still progressed slowly toward preparing for game shape, especially because they hadn’t had the facilities in the off-season to work on individual skills and strength.

“We’ve tried to do that in a safe and healthy way,” McCombs said. “We’re in a good place. Having the preseason opportunity to work with the newcomers and help them start to learn our defensive and offensive systems. The strong returners are really able to help them see what it looks like.”

It’s good energy when they’re on court. The coaching staff and upperclassmen have been working to build the off-court relationships, which isn’t easy given social distancing. “You’ve got to find time and moments to get to know each other better,” said McCombs.

The first official practices were last week, which allows the team more time together. Almost all classes are virtual, but Stony Brook remains an intellectually demanding university. McCombs said it’s the best of both worlds—great students and great athletes.

“We’ve found the right players,” said McCombs. “They want to be a part of something special, something bigger than themselves. It’s really the connections that we build. We want our players to feel comfortable having conversations with us and with each other about real life things. Anything we do in basketball translates to our lives.”

Details of the game schedule are still being finalized. There will be minimal traveling to maintain health protocols. Fortunately, there are many good Division I women’s teams in the tri-state area.