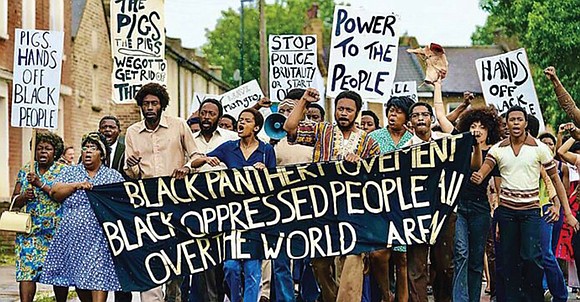 Steve McQueen’s “Mangrove” tells the story of the “Mangrove Nine, Black defendants put on trial in 1971 after taking part in protests against police raids of the Mangrove restaurant in Notting Hill in London, England.

The lineup at the 2020 New York Film Festival (NYFF) included an impressive array of African diaspora films and the festival’s usual collection of international motion pictures.

McQueen’s homage to his Caribbean roots will appear on Prime Video later this year. Other NYFF entries will roll out in theaters, VOD and on streaming service – in months to come.

All in: The Fight for Democracy

If voter suppression doesn’t spark righteous indignation, nothing will. To understand the gravity of the problem, reflect on the findings of directors Liz Garbus and Lisa Cortés and 2018 Georgia gubernatorial candidate Stacey Abrams. The history of voting machinations goes back to the 1700s, when only White people who owned land could vote.

Eventually others could, but progress was followed by regression: poll taxes, literacy tests and a 2013 Supreme Court ruling that gutted parts of the 1965 Voting Rights Act.

Abrams walks you through the devious ways people are denied their rights to elect politicians and specifically points to the artifices used to stifle Georgia citizens’ rights and impede her ability to become governor. The facts and figures the doc have amassed are so alarming that they will make you treasure your right to vote. Timely. Illuminating. Required viewing. The weaponization of voter suppression is unmasked by very astute filmmakers and an exceedingly brave politician.

The festivities take place in 1980s London, where the magic of dance and reggae/pop music put a joyful aura in the air that’s so powerful party goers sing along to the music like they’re in a Broadway show. The thinly plotted drama/romance follows Martha as she meets the very debonair Franklyn (Michael Ward).

It’s all about the mood, music, images and feeling as McQueen recreates a time when Caribbean expatriates held on to their culture by socializing. McQueen takes his time painting this indelible portrait. Shapes, colors, textures, sounds, clothes and setting define the movie. A work of art. A complete surprise. Gorgeous (cinematographer Shabier Kirchner). Hard to wrap your head around this much artistry. But you must. As the DJ says, “Move your feet. You don’t know who’ll you meet.”

In the Nottinghill section of London in 1968, the West Indian community has taken the neighborhood restaurant Mangrove into its heart. The café is run by Frank Crichlow (Shaun Parkes, TV’s “Lost in Space’’), a Trinidadian immigrant who is as proud to serve émigrés and local activists curry goat as he is to offer them a community center. Police harassment is part of daily life.

Says Darcus (Malachi Kirby, “Roots’’), a Black Panther: “The police will have to stop it or the Black community will have to stop them.” It’s a sentiment echoed by his comrade Altheia Jones-LaCointe (Letitia Wright, “Black Panther’’). Continued brutality incites a neighborhood march, which involves a clash with the cops. Nine people are arrested, imprisoned and dubbed the “Mangrove Nine” as they fight for their freedom in an impassioned court case.

The story, written by Steve McQueen and Alastair Siddons and directed by McQueen, is based on fact and displays waves of police violence so disturbing it will hook audiences

into the plight of those on trial.

When the restaurant crew goes berserk in a cop station after one of theirs has been beaten, the movie hits a level of blistering drama that is sustained throughout the rest of the film. Oscar-caliber performance from Kirby, Wright and Parkes.

With an evil judge, conniving prosecutors and lying police vs. courageous activists, McQueen shows a gift for courtroom drama on the level of Sidney Lumet’s (”12 Angry Men’’). Steel band music and Toots and the Maytals singing the classic reggae song “Pressure Drop” help this reverent feel for West Indian culture and an unwavering quest for justice resonate.

J. Edgar Hoover’s evil attempts to silence Martin Luther King in the ‘60s are notorious. But it took documentarian/director Sam Pollard (Mr. Soul!) and co-writers Benjamin Hedin and Laura Tomaselli to draw a straight line between the FBI and King based on newly declassified files. Hoover feared the rise of a Black Messiah, and his racism and paranoia motivated him to connive.

Tapes from hotel rooms, files and archival footage are all assembled meticulously and presented like a professor teaching a grad course or a prosecuting attorney building an airtight case. Clips of RFK, JFK, Andrew Young and informants abound. Images of MLK railing against segregation and the War in Vietnam are iconic: “No money for the war on poverty. But money for (Vietnam) war.” Be prepared to be deluged with pertinent facts, data so detailed and academic general audiences may feel overwhelmed. Which would be a shame. Films that divulge the reckless behavior of the FBI and/or government should be seen so the country doesn’t repeat that kind of malfeasance that leads to civil rights leaders being maligned and murdered.

“Your talent doesn’t belong behind closed doors. You should be a benefit to the community,” says a mentor. Those words steer Leroy Logan (John Boyega, Star Wars: Episode VII – The Force Awakens), a young forensic scientist, towards recruitment for a local police force in his West Indian neighborhood in 1980s London.

Watching his father Ken (Steve Toussaint) get physically abused by the cops is another driving force. Leroy ‘s good intentions for reform meet with resistance from fellow cadets, and subsequently fellow constables in the Metropolitan Police Force and his commanding officer.

Filmmaker Steve McQueen with co-writer Courttia Newland (Lovers Rock) expertly recreates a true crime/drama story that captures the depth of police rancor and an officer who dared to fix it. Boyega’s stirring performance reaches extremely high levels of drama and indignation, the kind few of his other roles offered. He deserves an Oscar nom.

Tense scenes between the do-right son and wronged father ache with sadness, fear, betrayal, stubbornness, discord—then healing. Toussaint and the supporting cast—from the family to the police characters—are electric. Watching West Indians and Pakistanis be abused makes you see the urgent need for a transformation. A searing exposé. Excellent. Fiery. Courageous filmmaking that demands an end to inhumane policing and systematic racism.