Battle of the Bands, HBCU Edition 2020 at Black Lives Matter mural in Bed-Stuy 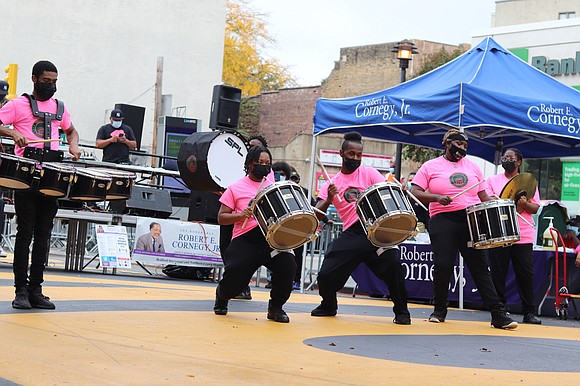 Cornegy, Jr. asked for the Divine 9 fraternities and sororities to come and show their strengths; and HBCU colleges to bring their resources and information. The Battle of the Bands event honored homecoming which so many students and new graduates missed out on.

In the days before the Battle of the Bands, Councilmember Cornegy said, “In just over four months, our Black Lives Matter mural has already been a part of so much in our shared Brooklyn community. Our mural has been a feature of protests for police accountability and police reform, we have shared the joy of a loving couple’s marriage, we have shared a production by the Billie Holiday Theatre of ‘Twelve Angry Men and Women,’ and we have honored victims of the pandemic with a moving floral tribute. Our mural has been part of yoga, health and wellness and a part of raising awareness about mental health, domestic violence, and Census 2020. Today we add Historically Black Colleges and Universities, bands, DJs, and step teams to that list of how we make this Black Lives Matter mural a part of our community. Our mural will not be static, this is a living, breathing part of our community that galvanizes our collective efforts to lift up the love, education, arts, and lives of our shared community. Thanks to all the community partners and sponsors making today’s Battle of the Bands possible.”

It was another great community event, with residents, families, people shopping and/or running errands stood and watched the show.