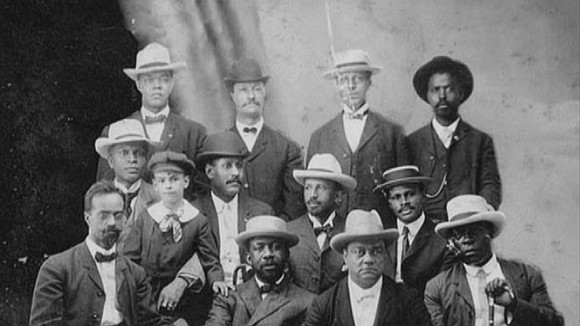 Members of the Niagra Movement in 1905 at Fort Erie Rights Advisory: No known restrictions on publications

There is a classic photograph of 12 men, seemingly all Black, posing in front of what appears to be either Niagara Falls or a replicated background. At the center of the picture is W.E.B Du Bois, one of the founders of the Niagara Movement of which the men are members. In the front row, second from the left is Clement Morgan, and he is our featured luminary this week.

Born into slavery January 9, 1859 in Stafford County, Virginia, Clement Garnett Morgan, along with his parents, achieved freedom with the passing of the Emancipation Proclamation in 1863. Almost immediately thereafter, the family moved to Washington, D.C. where Morgan attended the prestigious M Street High School. Trained as a barber, he moved to St. Louis, Missouri upon graduation and there taught for four years at an all-Black school.

With a burning desire to gain higher education, Morgan moved to Boston and enrolled at the Boston Latin School, choosing a college preparatory curriculum. He distinguished himself as a student, earning a Franklin Medal and the Lawrence Prizes in declamation and reading. He was the adjutant of the school’s battalion during his senior year. In 1866, he graduated with honors and at 27 enrolled at Harvard University.

To cover his tuition and other expenses at Harvard, Morgan worked as a barber, and this income was supplemented by various scholarships. As a senior he bested Du Bois in the competition for the Boylston Prize in oratory, thereby becoming a lifelong friend and colleague. He received his B.A in 1890 and his LLB from Harvard University Law School in 1893, and became the first African American to earn both degrees at Harvard. Of course, again Du Bois was right behind him the following year as the first African American to earn both a B.A. and a Ph.D. from Harvard.

In keeping with a traditional practice at Harvard, Morgan was elected to deliver the “Class Day” speech. Thus, he was the event’s first African American speaker and he was further commended since he was the first to do so from the working class, an honor usually set aside for someone from the upper strata of society. Such a designation brought Morgan recognition from across the country, some of it derogatory, especially from racist publications who mocked his selection and viewed it as pandering. Officials at Harvard defended Morgan’s selection declaring it was based on merit, and merit alone.

From the classic photograph some of Morgan’s physical features fit the descriptions printed of him at the time, and from his wide forehead to his broad shoulders “he radiated dignity,” a local newspaper reported. The great abolitionist Thomas Wentworth Higginson, who knew Morgan personally, said “I do not recall a single case in which a young man has shown greater endurance in struggling against all kinds of opposition.”

Unfazed by the attention he garnered in the press, Morgan offered no comment and merely went about preparing for the speech and the response. His was just one of 44 presentations during commencement, and on this occasion he was surpassed by Du Bois as he did all others. Morgan was ranked sixth. But the contest wasn’t over and was soon a source of controversy because there were two African Americans among the speakers. To resolve the situation Morgan was replaced by a white student, a move that infuriated at least one white faculty member who resigned from the committee.

After graduation from law school, Morgan was admitted to the Suffolk Bar and then opened his law office on Court Street in Boston. All the while he continued to be active in the fight for civil rights and delivered a stirring speech on race unity in 1890 at the Charles Street AME church in Boston. That speech was widely noted and included such remarks from Morgan that “I am glad to be a Negro and I mean it from the bottom of my heart. I mean to be a Negro. On the bottom of my heart is written Negro…If any of you are ashamed of your blood it is cowardice.”

But it was his law practice that earned him the most enduring praise and notoriety, particularly his advocacy for a person’s civil rights. Some of his cases were documented in the press and given additional exposure via word-of-mouth, and he was soon viewed as an attorney for the downtrodden, one who was willing to stake his profession in the defense of an unjustly accused client. He was steadfast and forthright in coming to the aid of parents who insisted their children receive the best education despite the restrictions of segregation and discrimination, and Morgan was their unwavering counsel.

When Du Bois set out to form his Niagara Movement in 1905, he had not forgotten Morgan and his remarkable achievements as a student and his subsequent outstanding record as an attorney. He was invited to be among the 29 founding members of the organization. A staunch adversary of the policies of Booker T. Washington, a stance of considerable favor for Du Bois, Morgan was chosen to represent the Massachusetts chapter. In this position he was dutifully aligned with Butler Wilson, who headed the branch office of the NAACP. They worked together in 1915 in an effort to ban the then popular racist film “The Birth of a Nation.”

The two were adamant in their opposition to the racist message of the film, and when the city’s mayor refused to ban the film they demanded a recall. It was not until 1921 that William Monroe Trotter, another Niagara member, was able to get the film banned in the city.

Always active in the Republican Party, Morgan was elected to the Cambridge Common Council from Ward 2, a predominantly white one. He served two one-year terms. In 1896, the year of the heated debate over Plessy v. Ferguson, he became the first African American elected to the Cambridge board of aldermen, and the first Black alderman in New England. He was showered with honors during this phase of his career, including one from the Odd Fellows in Cambridge. His bid to serve on the state legislature was not as successful.

As for his personal life, he married Gertrude Wright in 1897 and they belonged to several exclusive social clubs, including the Omar Khayyam Circle, an African American literary and intellectual group that met often in the home of Maria Baldwin.

On June 1, 1929, as the nation endured the Great Depression, Morgan died at the Corey Hill Hospital in Brookline, Mass. He was 70. In 1991, a park in Cambridge was dedicated and named in his honor. A plaque and mural notes a few of many achievements.