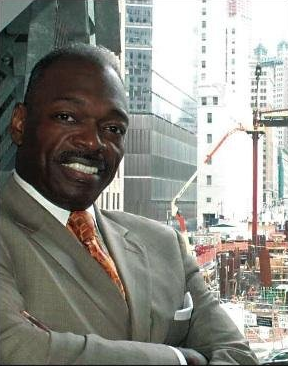 Editor's Note: This article was originally published in 2012

Frederick Myers plans to spend this September 11 in solitude. He's going to take a day off from work and doesn't have plans on watching the hours of news coverage remembering the tragic day. He plans on meditating and reflecting on humanity.

Even eleven years after the horrific tragedy of September 11, Myers cannot hold back the tears when he talks about the massive loss of coworkers he lost on the day that changed the world.

A two-time survivor of both World Trade Center attacks in 1993 and 2001, the memories of the attack and the inhumane act still stays with him today. Myers attributes his faith in God and the inspiration of his daughter to what keeps him going.

The grief and pain Myers carry were prevalent during an interview with the AmNews while telling his story. His emotions over-flowed at times as he discussed the details of September 11.

"I've skipped over two terrorist attacks," he said. "I can't explain it."

A former employee of the Port Authority of New York and New Jersey for 20 years, which had its headquarters in the World Trade Center, Myers worked on the 64th floor of the North Tower. While Myers was not in the building during the 1993 bombing and the 2001 plane crashes, he considers himself a survivor because during both instances, he was supposed to be in the buildings.

"All survivors didn't come out with dust and blood on their faces," he said. "My testimony is that God steered me away from death two times. I was steered away from harm's way two times."

On February 26, 1993, Myers was planning to take a half vacation day but decided to take an entire day off. The truck carrying 1,500 pounds of explosives that was planted in the underground parking garage of the North Tower, which killed six people, detonated at 12:17 p.m. Myers said he would have been in the garage leaving for home on that day.

He said, "People had to run for their lives. We had to evacuate the building in the past, but we had no idea this time that we were the victims of an international terrorist attack. God didn't have me in the basement, and if he saved me one time, he'll protect me again."

Things were different after the 1993 attack, according to Myers. There was increased police, more lights and cameras put in place at the World Trade Center. But along with the increase of security, fear of the possibility of another attack happening began to rise.

"These terrorists had created fear and uncertainty," he said. "You always had a sense of 'Could it happen again?'" On September 11, 2001, it did happen again.

Eight years after 1993, Myers was still working for the Port Authority. By this time, he had been married and was the father of a 7-year-old daughter. He was a human resources project manager for the chief operating officer.

Working late the night before, Myers said it was a series of small events at his home in New Jersey that kept him from getting to the World Trade Center to go to work. Taking his daughter to the bus stop, unpacking a suit, ironing the suit and replacing a missing button.

"I had the TV on and the news interrupted to talk about an incident that happened at the World Trade Center. It took me a while to realize why all these incidents were occurring and that they all had a purpose. They were keeping me from getting to work."

At 8:46 a.m., American Air-lines Flight 11 crashed into the World Trade Center's North Tower between the 93rd and 94th floors and collapsed at 10:28 a.m. Myers' regular schedule would have had him in his office at the time.

He said, "My first reaction was 'I'm not going to work today,' which seemed obvious. Then when I learned about the second plane crashing into Tower II, I thought 'I'm not going to New York today.'" In total, 2,993 people lost their lives on September 11. In the Port Authority, 84 of the 1,400 employees who worked in the World Trade Center were killed when the tower collapsed. Because of his work, Myers knew most of the employees because he had helped them in the past with human resources issues.

"There's no workplace in the country that has had to with-stand two international terrorist attacks," he said. "The whole thing was like watching your own funeral."

Myers' emotions get the best of him when he discusses how his coworkers died. He references a cleaning woman who gave him a gift basket and a card containing a $100 bill as a wedding gift. He doesn't know where she is today or whether she is dead or alive.

The emotional effects took over Myers after the attack. He said the day after was very difficult.

"The next day, I felt like an alien in a foreign territory," he said. "The sense of community in an organization was shattered."

It took Myers two months to return to work at the Port Authority. After seeing two psychologists, Myers realized that the root of his pain was the fact that he had helped so many people in his workplace but was unable to save them from the attacks of September 11. "Eighty-four pieces of me went down with the World Trade Center," he said. "You can't be healed after something like that. I had developed personal relationships with all of them."

Returning to work for the Port Authority in late 2001, Myers was transferred to Jersey City, N.J. He left the Port Authority in 2007, taking a job working for the United Negro College Fund on Wall Street. "I didn't want to deal with the emotional trauma of having a workplace that was vulnerable to international terrorism," he said.

While police and firemen were praised for their work on September 11, Myers said that the stories of people of color have not been told in the media. Blacks, who worked in the World Trade Center, he said, suffered great losses.

"They suffered in a very different way," he said. "They lost their jobs and they were the victim of the economic fallout of 9/11. The World Trade Center was the economic center of the city and Lower Manhattan.

People of color suffered emotionally and economically. Many lost coworkers and jobs, which means no benefits, so who do you go to for mental help?" Myers believes that another attack similar to September 11 could happen again, and while his fears don't paralyze him from functioning normally, the traumatic experience, he said, stays with him.