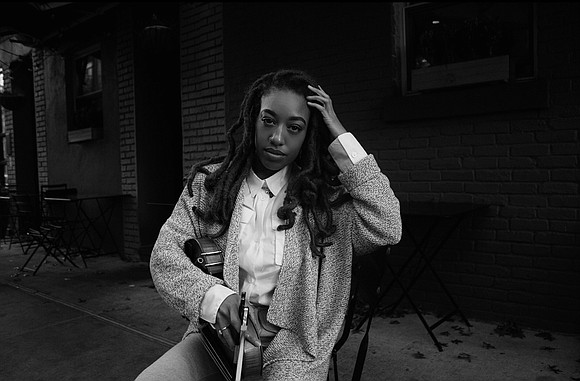 Iymaani Abdul-Hamid, the founder and music educator/instructor of IAH Studio in the South Bronx, was looking for a creative way to help her young violin students, ages 4 to advanced, to be more focused. “Violin isn’t a mainstream instrument, it isn’t cool,” smiled Abdul-Hamid. “So I’m battling what is cool like playing drums or hip hop.” In response to the coolness of it all and in order to give her students an opportunity to see people of color playing violin and other string instruments, she founded the Ode To Black Fiddlers (OBF) Music Festival four years ago.

Despite the raging COVID-19 pandemic, Hamid was able to produce the OBF last August. “I reached out to performers I knew and pulled it together in the midst of this coronavirus,” said Abdul-Hamid. “It was the first time we live streamed so we had some glitches, but the students loved it, people showed up and we got to perform for the community.”

This year the non-stop 8-hour OBF Music Fest was held in El Barrio (Harlem’s Eastside) Artspace and featured professional string musicians of color such as violinist and composer Majid Khaliq. This year the festival was very fortunate to have as a featured guest the renowned international violinist Kelly Hall-Tomkins (sponsored by Gateways), who was the official “fiddler” for the Broadway musical “Fiddler on the Roof.” I had the pleasure of interviewing Abdul-Hamid during the livestream.

“OBF is a way for my students to see musicians in an afro-centric space and offers them the opportunity to violinists and other string musicians playing outside of the classical platform in a mainstream setting,” explained Abdul-Hamid. “This is the stage for my students and professionals to show off.” The first festival at the Bronx Artspace about 75-80 people attended, but that audience has grown to 350 or more for the last three years. As expected the audience dropped drastically last month due to the coronavirus. “We are trying to shift the paradigm of what the violin means; it isn’t an elitist instrument as most people tend to believe,” says Abdul-Hamid. “In the future I would like to see Ode to the Black Fiddler Festival grow to the size of a major festival like AfroPop.”

Currently, Abdul-Hamid is looking for studio space for her IAH Studio, her school for violin education. She is teaching the instrument out of her house in the South Bronx that has been in her family since 1940. She calls it a “family heirloom.” “For me this is more than just teaching violin or viola lessons, it is a cultural enrichment center. I care about educational well-being, how do you feel, did you eat today. It’s child development, the holistic whole of the student with all the services to be included in the future,” explained Abdul-Hamid. “The cultural component to this reflects the history of the violin and banjo that both date back to Africa and slavery.”

Her innovative curriculum grew into a small business, IAH Studio, offering private violin, viola and music theory instruction to youth and adults in the South Bronx and Harlem, and curating events that showcase the artistry of musicians today and throughout history and the diaspora.


After leaving college Abdul-Hamid went the classical route but says it wasn’t happening. That was followed by her teaching three years at the Brooklyn Conservatory of Music and Harlem School of the Arts. Since the pandemic Abdul-Hamid has been practicing for wedding gigs that are beginning to start up again. She performed on such television shows as “Kelly and Ryan,” the “Late Show with Stephen Colbert,” and with the vocalist Louis Capaldi on the “Jimmy Fallon Show.” She often plays in bands when strings are needed.

“I play everything, but it’s sad—I use my instrument as a living and haven’t used it to provide my future,” says Abdul-Hamid. “I’m working to maintain as opposed to just being creative and working with my students. My father keeps asking me, ‘When is this going to click? You keep using your own money.’” Well, she is constantly working on it. She has plans to publish her first book, “Ode to the Black Fiddler” and introduce a clothing line and educational products such as her ABC’s of String Musicians of Color (https://bit.ly/3lVws61). Abdul-Hamid has collected a wealth of history on string musicians of color dating back to violinist Joseph A. Emidy (1775-1835) and Lucille Dixon (1932-2004), a member of the International Sweethearts of Rhythm and a member of the Earl Hines jazz band. For information on music lessons, visit www.iahstudio.com.