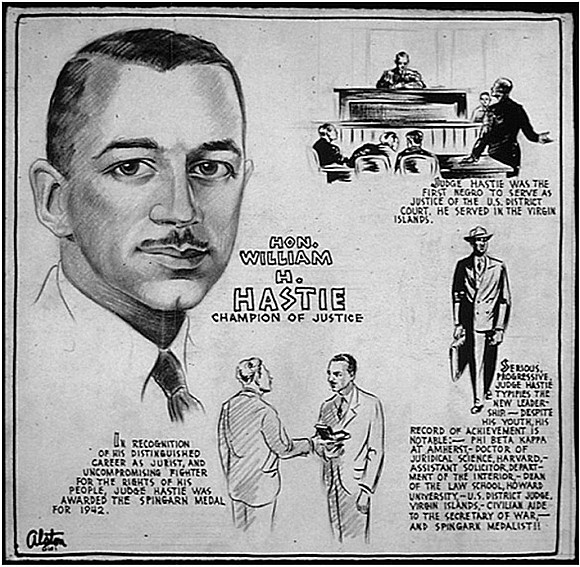 Last week we featured Judge Constance Baker Motley and with the focus now on Judge William Henry Hastie Jr. we feel there is both gender and judicial balance.

Upon receiving his law degree, Hastie began his practice in the nation’s capital, which put him in close proximity to government agencies. He served as assistant solicitor for the U.S. Department of the Interior from 1933 to 1937, primarily advising the agency on racial matters. These steps were accomplished while he continued his law practice with the esteemed Charles Hamilton Houston.

In 1937, President Franklin D. Roosevelt appointed Hastie to the District Court of the Virgin Islands, thereby conferring on him the first African American federal judgeship. It was a decision that was met with heated controversy with Sen. William King of Utah, a Democrat, challenging the appointment, calling it a “blunder.” Two years later, Hastie resigned from the court and accepted the position as the Dean of Howard University School of Law, where he had previously taught. During his stint as an instructor at Howard, he became a member of Omega Psi Phi, a prestigious fraternity. One of his students was Thurgood Marshall, future head of the NAACP Legal Defense Fund and later appointed to the U.S. Supreme Court.

Alongside Marshall, Hastie was co-lead lawyer in the voting rights case Smith v. Allwright in which the Supreme Court ruled against white primaries. One of Houston’s sons became a partner in their law firm.

From 1940 to 1942, Hastie worked as a civilian aide to the U.S. Secretary of War Henry Stimson. In this capacity he often championed the causes and complaints of African Americans in the military helping them to achieve unrestricted opportunities in the war effort. In 1943, he resigned his position in protest against racially segregated training facilities in the U.S. Army Air Force. His outspoken stances against military discrimination and his legal acumen earned him praise and the Spingarn Medal from the NAACP.

President Harry Truman appointed Hastie as Territorial Governor of the U.S. Virgin Islands, and in this post from 1946-’49 he was the first African American. Hastie was next appointed by Truman to the U.S. Court of Appeals for the Third Circuit, another first for him as an African American. At one time it was highly rumored that Hastie was due an appointment to the Supreme Court during the Kennedy administration, but the political hostility at the time, particularly from such Southern elected officials as Sen. James Eastland of Mississippi, would make the nomination a firestorm of resistance. Plus, according to some pundits, Chief Justice Earl Warren believed Hastie would be too conservative as a justice. Byron White was appointed. Hastie may have torpedoed his chances with comments that both race and class have to be considered in the civil rights movement. From 1968 to 1971, he served as chief officer as a member of the Judicial Conference of the United States. He resumed senior status in 1971.


Warren’s concern about Hastie’s attitude toward change was not far-fetched given his background and how he conducted things in the courtroom, insisting on neutrality in rendering an objective judgment.

“The Negro lawyer has played and continues to play a very important role in the American Negro’s struggle for equality,” he opined. His tendency to express a public position on issues wasn’t always muted or delayed, recalling his resignation when faced with racism in the military and the government’s failure to do anything about it.

He was 71 when he died on April 14, 1976 in East Norriton, Pa. Hastie’s legacy is extensive. In Philadelphia the Third Circuit Library is named in his honor. In Knoxville, where he was born and bred, an urban natural area bears his name.