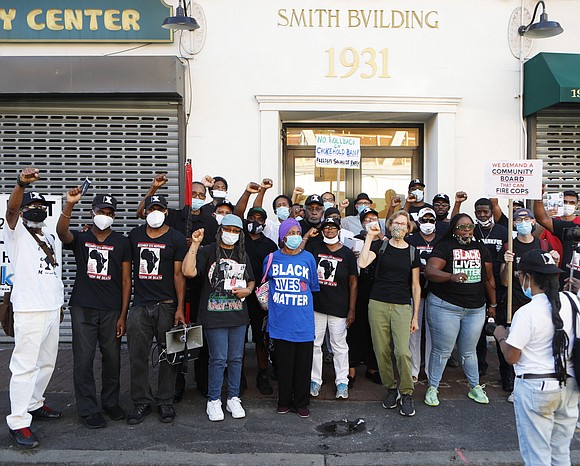 As nationwide protests against police killing Black people and calls for defunding and reform have gained national and international support, law enforcement backlash from President Trump to the NYPD and PBA have also accelerated. In New York City, Mayor de Blasio and the NYC Police Department have pushed the NYC Council to introduce an amendment to the new chokehold ban law that took effect in July 2020.

Last week, NYC Council Member Donovan Richards, chair of the Public Safety Committee, wrote an amendment to the chokehold ban law which makes use of a chokehold, or chest/back diaphragm compression by a law-enforcement officer a misdemeanor crime punishable by up to a year in prison. Donovan’s proposed amendment to the law will insert the word “recklessly” in regard to diaphragm compression and would give the police a huge loophole and reverse clear police accountability.

December 12th Movement member Attorney Roger Wareham said that it is in this setting of police intimidation that we are now seeing elected officials back tracking. The same Council Member Donovan Richards who in mid-August said, “The PBA (Police Benevolent Association) and the police department do not have a right to act on pieces of legislation the council passes that they don’t like in an active slowdown, because that’s certainly what we are feeling on the ground,” later in the month told cable news channel NY 1, “I would be open to having a conversation about the diaphragm portion of the chokehold bill if this means the New York City Police Department would ‘get back to work. And I don’t want to hear excuses.’”

Wareham determined: “It is clear, the push to get this amended bill of capitulation through city council would first seek support in the Black, Latin and Asian Caucus. Upon learning of these developments, the December 12th Movement immediately moved to inform the community. On August 31, it held a street demonstration at the office of Queens City Council Member Daneek Miller, co-chair of the Black, Latino and Asian Caucus. In the BLAC meeting, only Council Members Inez Barron and Deborah Rose took a definitive position against the amended bill.”

Sefu Sankofa, a leading organizer stated, “While tens of thousands have taken to the streets of NYC to demand defunding of the police and an end to police murder of our people, Richards is making back room deals with NYPD and the mayor for his own political advancement. It is no more business as usual, we have got to expose him and stop him in his tracks. Stop the amendment now!”

Wareham said, “The momentum against police murder of Black people is rising. From the NBA, WNBA, NFL and other professional sports organizations to the streets of Rochester NY, Louisville KY, Lafayette LA, Portland OR, and Durham NC,  people insist on fundamental changes in policing across the country.”