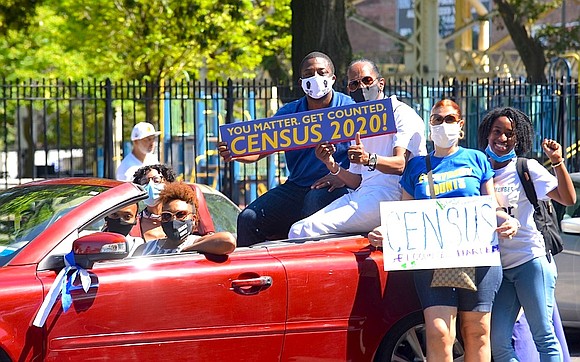 State Sen. Brian Benjamin and others get the word out about the 2020 Census in Harlem Bill Moore photo

At the beginning of September, New York City’s 2020 Census response rate was at 57.9%, several percentage points shy of the nation’s average of 65%. Local leaders and elected officials are warning New Yorkers that it’s their last chance to be counted for the next 10 years in the Census as the Sept. 30 deadline is just under two weeks away.

This week, officials from the U.S. Census Bureau reported that over 92% of housing units have been accounted for in the 2020 Census with 26.6% counted by census takers and other field data collection operations and 65.9% of housing units responding online, by phone or by mail.

In August, President Donald Trump moved to end Census collection from Oct. 31 to Sept. 30. Results from the Census will be delivered to Trump in December rather than next spring. Trump planned to exclude undocumented immigrants from the population that determine states’ seats in the House of Representatives, however, a three-judge panel in the U.S. District Court for the Southern District of New York blocked that plan this week. The new deadline also heightens the risk of an undercount of the Black community. Civil rights groups, including the National Urban League (NUL), civic organizations and local governments filed a legal challenge in the United States District Court for the Northern District of California to block the Trump administration’s plan forcing the Census Bureau to shorten the 2020 Census count. “We’re not going to allow the American people to be cheated out of a fair and accurate census count because politics has infected the process,” NUL President and CEO Marc Morial said. “The Trump administration has openly worked to drive down minority participation in the Census to give less representation to more diverse states, and now is rushing the deadline so that the data can be manipulated to exclude immigrants, in defiance of the Constitution, before legislative districts are drawn.” New York City officials say the new deadline means crunch time and getting people to fill out the Census is a priority.

While people are being encouraged to fill the Census out on their own, enumerators have been scouring the city to get an accurate count. On Wednesday, Sept. 16, City officials, elected officials, and community advocates and leaders gathered in Manhattan, The Bronx and Brooklyn for the “Countdown to the Future” Kick-Off to mobilize New Yorkers to obtain a complete Census count. In a recent interview with the AmNews, NYC Census 2020 director Julie Menin said that neighborhoods could lose out on billions if there’s an undercount. “Right now we need every New Yorker who has not filled the Census out to go online to my2020census.gov and immediately fill it out,” Menin told the AmNews. “For every New Yorker that has filled it out, we need them now to go into their networks to neighborhoods, to colleagues, to friends to make sure they fill the Census out.”

Menin added that NYC Census 2020 has phone banked over 3 million New Yorkers, and sent text messages, has media campaigns in 26 languages, TV ads, digital ads, radio ads and print ads. Local Census officials have been at high traffic areas like subway stations. Earlier this year, several leaders in New York’s Black community joined the effort to get a large Black turnout for the Census. The team warned Black citizens about the dangers of an undercount and the devastating effects. The COVID-19 pandemic added even more roadblocks for goals of getting an accurate count.