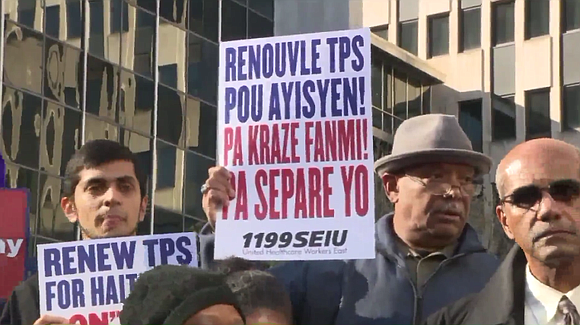 The 9th Circuit Court of Appeals ruled this week that Trump can end the Temporary Protected Status (TPS) of some 300,000 immigrants, many from Sudan, Haiti, El Salvador and Nicaragua.

“It is deeply disturbing and frankly enraging that the Ninth Circuit is allowing the Trump administration to end Temporary Protected Status for El Salvador, Haiti, Nicaragua and Sudan, opening the prospect of deportation for hundreds of thousands of people who have made the United States their legal home for decades,” said Bragg. “Thousands of these men and women own their own houses, others run their own businesses, and thousands more work to clean and protect major properties across the East Coast as longstanding members of this union.”

In the Immigration Act of 1990, the U.S. Congress created Temporary Protected Status. TPS was designed to grant nationals from specific countries dealing with environmental disasters, armed conflict or extraordinary circumstances a work permit and a stay of deportation to foreign nationals from countries the U.S. designated for TPS.

Members of the Trump administration said they were pleased with the court’s ruling.

“Today, the Ninth Circuit ruled in favor of safe communities and vacated two overboard injunctions that had permitted the release of criminal aliens into American communities,” said the White House press officials in a statement. “This decision will allow for better communication between the federal government and local jurisdictions and prevent criminal aliens from being released onto the streets where they pose a threat to law-abiding Americans.”

The secretary of Homeland Security is responsible for determining which countries are granted TPS designation, but not before consulting with other government agencies first. Chad Wolf, the secretary under Trump, has been a part of the Department of Homeland Security since its creation in 2002 joining as a mid-level staff member. Recent accusations of the department becoming a private military for Trump used to deploy to cities run by Democrats (like Portland, OR) have fallen on deaf ears.

In the meantime, Bragg sees the recent developments as another reason to vote Trump out in November.

“It must be stressed that this decision cannot be implemented until next year, and it does not end a separate court injunction protecting Haitian TPS recipients,” stated Bragg. “In the meantime, the decision redoubles our commitment to help remove this blindly anti-immigrant and blatantly racist president from office, by encouraging our members and all working people to vote for the sensible and ethical leadership offered by Joe Biden and Kamala Harris.

“It is also a signal that it is time for the Senate to take up and pass the HR 6, the Dream and Promise Act, which would put TPS holders on a pathway to citizenship,” Bragg continued. “This cruel practice of assailing predominantly Black and Brown immigrants must end now.”