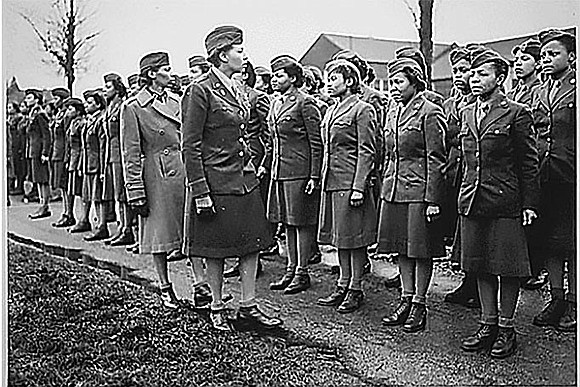 When the man in the Oval Office impugned the war dead, calling them “suckers” and “losers,” it’s easy to recall the countless number of brave men and women who sacrificed their lives in the fight against an enemy. Usually, these moments are devoted to the courageous men with only an occasional nod to the women in the military, particularly during World War I and II.

This week’s salute and praise we extend to Lt. Colonel Charity Adams Earley, the first African American commanding officer in the Women’s Army Corps deployed overseas during a war. Charity was born December 5, 1918 in Kittrell, North Carolina and grew up in Columbia, South Carolina. Her father was a minister and her mother a teacher, both of whom instilled her with a passion for learning.

Charity, almost from her first contact with education, expressed an advanced intelligence, and while a student in elementary school she met the requirements to attend high school. But her parents blocked this move since, in their estimation, she was already several grades ahead of her peers. As expected, she was valedictorian of her graduating class from Booker T. Washington High School, earning a scholarship to attend Wilberforce University in Ohio.

At Wilberforce, Charity majored in mathematics, Latin and physics with a minor in history. She was also exceedingly active in extracurricular groups, including the college’s branch of the NAACP; the Women’s Self-Government Association, and the Greek Sorority, Delta Sigma Theta. In 1938, she graduated with a Bachelor of Arts degree.

In addition to her undergraduate studies she took classes in education that would allow her to teach upon completion of her degree. She taught math and science at a junior high school in Columbia four for years, from 1938 to 1942. During the summer when she wasn’t teaching she took graduate courses at Ohio State University that led to a degree in vocational psychology.

Meanwhile, the globe was heating up with military activity as World War II spread to the U.S. In the spring of 1942, anticipating a needed defense against invasion, the Women’s Army Corps (WAC) was formed. Charity heard about this development and applied immediately. She was accepted in the summer of 1942 and was dispatched to Iowa to begin training at Fort Des Moines to officer candidacy school. By August of that year she had successfully completed training and acquired the commission. For the next two years she worked as a staff training officer, a station control officer and a company commander. She was promoted to major in the fall of 1943, making her the highest ranking female officer at the training center. More than 800 women were under her command.

Given her leadership skills, she was chosen to be the commanding officer of the first unit of WAC African Americans to be deployed overseas. Her unit was the 6888th Central Postal Directory Battalion. When it was discovered that too much of the mail was undelivered to the troops, Charity and crew were assigned to correct this oversight. It was a formidable task with hangers of undelivered mail that needed sorting and to be redirected. This activity began in Birmingham, England with the women working around the clock in three shifts, eight-hours per shift, seven days a week to get the mail delivered to the troops.

Despite their speed and capability, the task was an onerous one but in three months they had rectified the situation. But this was just the beginning. The next assignment was at the postal facilities in Rouen and Paris, France, where the loggerhead of mail was even worst, forcing the unit to handle almost 65,000 pieces of mail a day. Charity was such an inspirational leader that by Dec. 26, 1945 she was promoted to lieutenant colonel, placing her directly under the colonel and director of the organization, Oveta Culp Hobby. In 1946, at her request, she ended her active duty and was presented with a distinguished service to the military by the National Council of Negro Women, Inc.

Along with the invitations to speak about her military experiences, Charity returned to Ohio State University and completed her master’s degree in 1946. Soon she was employed as a registration officer with the Veterans Administration in Cleveland, Ohio.

In this capacity, she reviewed the veterans’ requests for educational funding other benefits under the G.I. Bill. She determined how much each veteran was awarded, and she functioned at this from 1946 to 1947.

With this behind her, she began pursuing a number of roles in academia, first at Tennessee State Agricultural and Industrial State College in Nashville, where she was the dean of student personnel services; she held a similar position as a dean at Georgia State College in Savannah. In 1949, she married Stanley A. Earley, Jr. and she moved to Zurich, Switzerland where her husband was training to be a doctor. While there Charity attended Minerva Institute to learn German. After mastering the course, she took two additional courses in the language at the University of Zurich. In her second year she studied at the Jungian Institute of Analytical Psychology without pursuing a degree.

By the 1950s, she was back in the states and became actively involved in the community and civic work in Ohio. Service to the community was complemented by her appearance on a number of boards, particularly the board of directors and governors at the Dayton chapter of the American Red Cross and the board of the Dayton Power and Light Company. Also, she was the founder of the Black Leadership Development Program (BLDP) in Dayton in 1982 that sought to educate and train African Americans to be community leaders.

That organization now named Parity, facilitated BLDP’s training program. Over the years, she was often honored for her military successes, including a tribute from the Smithsonian National Postal Museum for her work with the 6888th Central Postal Directory Battalion. That ceremony was conducted in the nation’s capital in 1996, six years before her death January 13, 2002.