Oscar winner Regina King’s ‘One Night in Miami’ is a knockout! 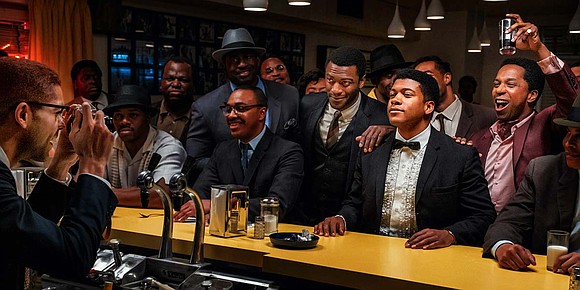 "One Night in Miami" Photo courtesy of TIFF

Oscar-winning actress Regina King did it with her film directorial debut, “One Night in Miami,” currently screening at TIFF, which the actress hopes “can inspire real transformative change.”

Amazon Studios picked up “One Night in Miami” with plans to release it as an awards contender. The movie is based on the 2013 stage play by Kemp Powers and is set on the night of February 25, 1964, and follows Cassius Clay (Eli Goree) as he emerges from the Miami Beach Convention Center after defeating Sonny Liston and spends the night at the Hampton House Motel in one of Miami’s historically Black neighborhoods, celebrating with three of his closest friends: activist Malcolm X (Kingsley Ben-Adir), singer Sam Cooke (Lesie Odom Jr.) and football star Jim Brown (Aldis Hodge).

King, who took home a supporting actress Oscar last year for “If Beale Street Can Talk,” is bracing for the early Hollywood awards buzz about the film. To this end, cinematographer Tami Reiker and film editor Tariq Anwar delivered exceptional work and I would be remiss if I didn’t mention their spectacular contributions.

On deciding not to push the opening of “One Night in Miami”:

We can’t actually be there with arms together. This would have been our North American debut and sharing this on our soil. There’s a bit of me that feels a little sad about that. We hoped it would be received well. But nobody knows how it plays in an audience. We’re trusting the feedback from audiences, living vicariously through the audiences.

“One Night in Miami” was recently acquired by Amazon Studios and is expected to be released by the end of the year.

To learn more visit tiff.net and go to @ReginaKing on Twitter.