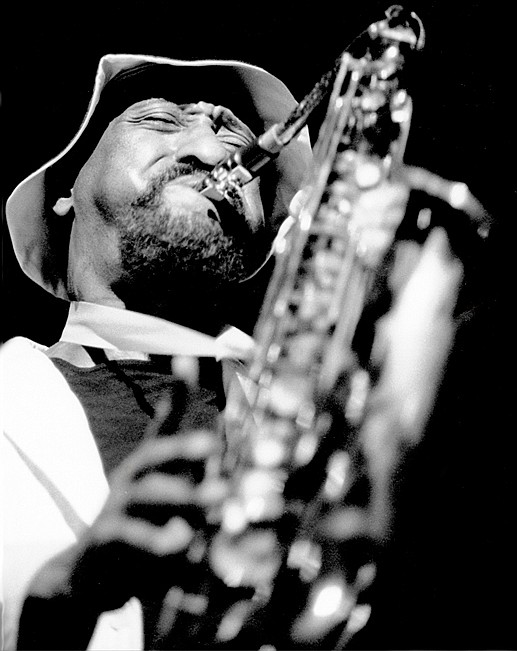 The genius, iconic tenor saxophonist and composer Sonny Rollins aka Saxophone Colossus celebrated his 90th birthday on September 7. In his remarkable seven-decade career Rollins is one of the most significant, influential jazz musicians in jazz history. His rich bold tone jumping with wow improvisational rhythms is immediately recognized.

Many of his compositions have become jazz standards such as “St. Thomas” (both of his parents are from the Virgin Islands), “Oleo” and “Doxy” (one of my all-time favorites recorded by a string of jazz musicians).

He began to follow Charlie Parker, and soon came under the wing of Thelonious Monk, who became his musical mentor. Living in Sugar Hill, his neighborhood musical peers included Jackie McLean, Kenny Drew and Art Taylor, but it was young Rollins who was out first working and recording with vocalist Babs Gonzales, J.J. Johnson, Bud Powell and Miles Davis before he turned 20. “Of course, these people are there to be called on because I think I represent them in a way,” Rollins said recently of his peers and mentors. “They’re not here now so I feel like I’m sort of representing all of them, all of the guys. Remember, I’m one of the last guys left, as I’m constantly being told, so I feel a holy obligation sometimes to evoke these people.”

He and fellow saxophonist Benny Golson are the only two surviving musicians who appeared in Art Kane’s 1958 photograph “A Great Day in Harlem,” of jazz musicians in New York taken in front of 17 East 126th St. between Fifth Avenue and Madison Avenue.

In the early 1950s, he established a reputation first among musicians, then the public, as the most brash and creative young tenor on the scene, through his work with Miles, Monk, and the MJQ. Miles Davis was an early Rollins fan and in his autobiography wrote that he “began to hang out with Rollins and his Sugar Hill Harlem crowd…He was an aggressive, innovative player who always had fresh musical ideas. I loved him back then as a player and he could also write his ass off…”

As the country struggles with civil unrest and protests as a result of heartless police killings of unarmed young Blacks, Rollins’ “Freedom Suite” (Riverside Records 1958) remains extremely relevant. In the album’s liner notes Rollins wrote, “How ironic that the Negro, who more than any other people can claim America’s culture as his own, is being persecuted and repressed; that the Negro, who has exemplified the humanities in his very existence, is being rewarded with inhumanity.” The title track is a 19 minute improvised intuitive swing suite peppered with Rollins’ bluesy tenor sax bluesy suite with his trio bassist Oscar Pettiford and constant drummer Max Roach. His black hair and beard have now faded to white, making him an active knowledgeable elder in the revolution.

“I learned about civil rights early in life; being born in Harlem my mother took me with her to protests for the Scottsboro Boys and Blumstein department store which didn’t allow Blacks. All we put into America, and we get nothing back. My grandmother was a Garveyite and they instilled in me the meaning and proudness of being Black,” stated Rollins during a recent birthday celebration interview with Dr. Cornel West and professor Tricia Rose on their podcast show “Tight Rope.” “I am the happiest person alive at 90. I’m fighting for personal understanding of my being here. I fight the good fight and live by the golden rule that keeps me strong. I am still here to learn.”

When Mayor Muriel Bowser of Washington, D.C. decided to make a civil rights stance by having a Black Lives Matter mural in bold bright traffic yellow paint brighten the street leading to the White House it sparked a creative phenomenon that swept across the country. In Brooklyn more than 30 community-based artists created New York City’s first Black Lives Matter street art mural in the Bed-Stuyvesant section. The project was organized by The Billie Holiday Theatre, under the direction of its Executive Artistic Director Dr. Indira Etwaroo and Council Member Robert E. Cornegy Jr.

In addition to “BLACK LIVES MATTER,” the mural includes a particularly poignant detail with 20 bars, representing the year 2020 and a row of caskets, with 151 names of the victims of police brutality and racially motivated killings in this country from Emmett Till to George Floyd. “The mural also includes Medgar Evers and George Junius Stinney Jr. [the young 14-year old who was wrongfully executed in the electric chair in June 1944 for the killing of two white girls in South Carolina],” stated Hollis King, creative director of the Billie Holiday Theater. “We added the most recent killings with two Black trans women, Riah Milton in Ohio and Dominique “Rem’Mie” Fells in Pennsylvania, as well as Rayshard Brooks in Atlanta.”

Work began on June 13 and took two weeks to complete via a collaboration between artists Cey Adams and Dawud West. The “Black Lives Matter” letters were directed by Dawud West. Renowned artist Cey Adams, who completed the American flag mural for the opening of the National Museum of African American History and Culture, was creative director of this installation. “This is community art for the community,” noted King.

“Sixty-five years ago in 1955, Mamie Till, Emmett Till’s mother, asked for an open casket at her son’s funeral. She said that ‘everybody needs to know what they did to my son.’ This street-size mural with the names of our brothers and sisters who have been killed by racially motivated violence in this country is the courageous act of a collective of Brooklyn artists,” stated Dr. Etwaroo. “We join with other cities across the country and say that this is our open casket to the world—laying bare the senseless and continued killings of Black people. In order to heal and to move forward, we must address that the current systems in place are inadequate to ensure life and liberty for all people. The artists are speaking truth to power.”

Standing in the middle of this huge mural of named Black people brutally killed without any respect to their lives as human beings strikes an angry chord, a taste of bitterness and revenge. A reminder that we remain in the heart of a struggle that never ended.

VOTE VOTE VOTE—life depends on it…