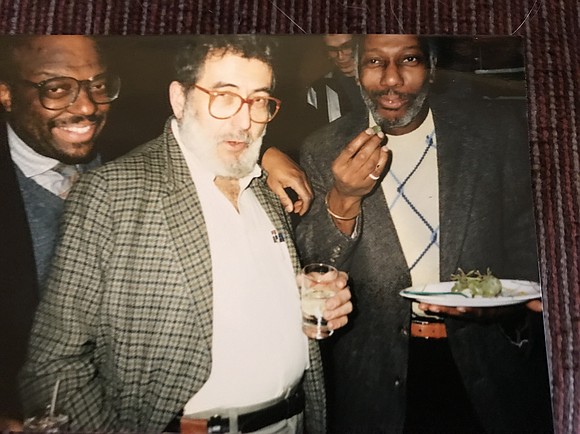 “I usually have no more interest in memorial celebrations than I have in funerals, since both bring out the hysterical nature of sentimentality, allow some to invent relationships and concerns they never had, and others to breathe more easily if an honest person will no longer be able to bear witness to their own lies,” Stanley Crouch wrote in the introduction to Notes of a Hanging Judge-Essays and Reviews 1979-1989, one of several collections he published. Oddly, he allowed a bit of sentiment to flow on this occasion for the deceased writer/poet Larry Neal, who if he was anything like his literary partner, Amiri Baraka would have been stunned by such praise.

There is no way to know how Neal would eulogize the recently departed Crouch. He made his transition Wednesday, Sept. 16, at a New York Hospital. He was 74 and no specific cause was given for his death, announced by his wife, Gloria Nixon-Crouch, though several friends reported he had been ailing.

It was as a jazz critic that Crouch gained a substantial reputation after arriving in New York City in the mid-seventies from Los Angeles, having been mentored by a coterie of cultural mavens, including poet Jayne Cortez; he soon published a book of poems, Ain't no ambulances for no nigguhs tonight. Some of his poems appeared in small magazines and journals, and he was also acquiring respect as a drummer.

But by the mid-seventies the drumsticks gave way to the pen, and his reviews were popping up in all the prominent music magazines and journals. At this time he was clearly an accepted writer in the Black Nationalist circle, so much so that two of his poems appeared in Black Fire, an anthology of Afro-American writing, edited by Baraka and Neal. Increasingly, however, particularly has he settled into the jazz scene in lower Manhattan and began to get writing assignments beyond the jazz milieu, he seemed to pride himself on taking more conservative, if not downright reactionary positions.

Baraka situated Crouch in an orbit of “Black right wing” commentators and notables such as Thomas Sowell, Juan Williams, Roy Innis, and Clarence Thomas. “Their employment is how the bourgeoisie adapts to our past victories,” he wrote. “They camouflage themselves as backward Negroes who during the sixties upsurge of the Black liberation movement were pods growing in the cellar of our politics.”

Always game for intellectual bouts or fisticuffs—and there were several memorable encounters—he is best remembered for his prose, the surprising lyricism that was often subverted by a trenchant dismissal. His style was reminiscent of those writers of scathing, acerbic wit like George Schuyler whose disdain for socialism was akin to Crouch’s adversity to Black radical thought. For every convert he brought to the world of jazz, especially the eloquent praise of his favorite musicians, he lost them with his denunciation of noted authors and political activist such as Toni Morrison and Malcolm X, who in his mine was nothing but a hustler. He summed up Morrison’s Beloved as “a blackface holocaust novel.”

Most rewarding was the publication of Kansas City Lightning, his long awaited biography of the immortal Charlie “Yardbird” Parker. It will probably stand as a testament of his insight and scholarship, to say nothing of his abiding love for jazz and many of those he celebrated in his reviews. In this regard, he was just as much hailed and he was assailed.

He was the recipient of several prestigious literary awards that was capped off by being named a MacArthur genius. One of his most luminous essays is “Body and Soul” the last in the Notes of a Hanging Judge. There is a section where he ruminates on the artistic genius of Bird: “Parker brought a fierce and fresh virtuosity to the saxophone, protesting its limitations, and discarded the vibrato many considered necessary for the expression of deep feeling in the work of his predecessors.” Some of his conclusions on Bird’s art pertains to his own, and how even more wondrous it could have been if stripped of his animosity. Of course, with that done, the essential Crouch does not exist.