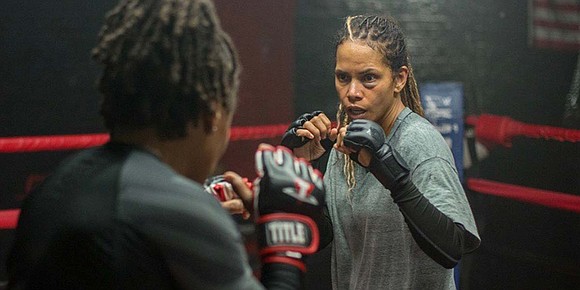 Oscar-winning actress Halle Berry knows a lot about perseverance in Hollywood. As a beautiful woman of color, she had to fight for roles that didn’t always focus on her natural beauty, but she did it.

Worldwide distribution rights to Berry’s directorial debut, “Bruised,” an MMA drama that screened as a work-in-progress at the Toronto Film Festival, were sold for close to $20 million to Netflix.

In “Bruised,” Berry plays a washed-up MMA fighter, Jackie “Justice,” who has to defeat her own inner demons and face one of the most intense rising stars of the MMA world to make her young son, Manny, proud.

Here is what Oscar and Emmy-award winning actress, and now director, Halle Berry had to say about directing “Bruised.”

On the Netflix deal announcement:

[The Netflix agreement] is a real thrill. The movie is still not a finished product, and that’s why I can’t stress enough the importance of film festivals, especially this Toronto festival.

I didn’t want to stop because I had prepared for so long. We had rehearsed; we were ready. So my mind, my director’s mind, was just keep going. And I compartmentalized that, and I just kept going: ‘I’m not going to stop. I’ve come too far. I’m going to act as if this isn’t hurting. I’m going to will myself through it.’ And so we did.

On winning the Oscar for “Monster’s Ball”:

On why she directed the film:

I’d been thinking about directing, but I thought this was too big of a role, and star in this big role, but I was encouraged by a friend. Once I embraced that concept, I had to go to the producers and pitch myself as the director. And to my surprise, they said yes.

On the importance of film festivals:

I can’t stress enough the importance of festivals, and especially this festival [TIFF].