‘Noughts + Crosses’ —In a world where Blacks (Crosses) dominate, still no answers 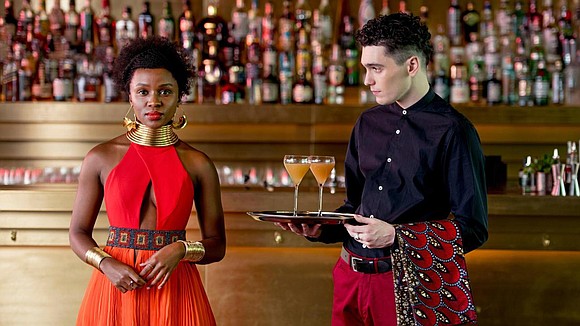 Well educated and well heeled, the Hadleys of Albion are like many of the world’s elite families. Their youngest daughter Sephy (Masali Baduza) is bright, warm-hearted, beautiful, and headed to one of the top universities in the world. Their other daughter Minerva (Kiké Brimah) is very similar, though less sympathetic to the plight of Albion’s oppressed lower class. Not just wealthy, the Hadleys are part of Albion’s 1%, leading a world built on the supremacy of people who look like them; what we would call Black people, but who in the alternate timeline of Peacock network (originally BBC) drama series “Noughts + Crosses,” are called Crosses.

Based on the 2001 YA novel by Malorie Blackman, “Noughts and Crosses” is set in a world where Africa (here called Aprica) colonized Europe seven centuries prior, and still holds complete control over its low-melanin Indigenous inhabitants, called Noughts. Albion is analogue for Britain, and those familiar with the King Arthur legends will recognize Albion as the fabled reunited Great Britain.

Tolstoy famously posited that unhappy families are unhappy in their own way and there are two families central to Noughts + Crosses. The unhappiness in the Hadley household is mostly self-created or selfishness created. They’re also rocked by the social unrest that has started to affect the country in the wake of yet another brutal police beating of a Nought.

The real-life impacts of racism cause the unhappiness for the working class McGregors. They, like other Noughts, experience chronic job insecurity and jobs are usually menial when they do have them. Salt of the earth Meggie McGregor (Helen Baxendale) is a latter-day lady-in-waiting to Sephy’s mother Jasmine (Bonnie Mbuli) and connects the families. When Meggie enlists her son Callum’s (Jack Rowan) help for a function at the Hadley home, sparks fly when he and his childhood playmate Sephy spy each other at the party

A man more turned on by power than by his wife, Sephy’s father Kamal (Paterson Joseph) is the government’s Machiavellian, segregationist head secretary. Jasmine wakes up next to empty wine bottles more than she does her husband. Elegant and vulnerable, she stumbles over unfortunate choices as she tries to meet her emotional needs.

Noughts + Crosses asks broad questions about the inevitability of a supremacist system based on race in a capitalist economy. These are intriguing questions, but they don’t really get explored in a nuanced way. What Noughts + Crosses does well, is elicit empathy. It asks the viewer to walk in the shoes of “the other.” How would you feel about political violence if you were oppressed for centuries? For those who have experienced systemic racial oppression, it asks what they would do if they had absolute power? Would it also corrupt them absolutely?

Noughts + Crosses’ world-building is as impressive as the questions it raises. A talented diverse cast powers a production where afro-centric furnishings, art, fashion and food seamlessly reign. Many of the Noughts wear cornrows and braids and sport African-inspired accessories. Band-aids are brown, presumably by default. Meggie prepares yams for the Hadleys. A statue of a Cross woman completely dominates the city’s skyline, visible from miles away.

The star-crossed romance between Sephy and Callum, growing in the midst of the often violent, political unrest, is one of the bigger problems with the series. It isn’t clear what Sephy and Callum have in common. They’re both smart, thoughtful, well-meaning and prone to questioning authority but there is no indication as to why they fall in love.

In one respect the mystery of their union increases dramatic tension. The viewer wonders if there is enough of a connection between them to stay loyal to each other as the tragedies that befall Callum, and the sacrifices Sephy must make, mount.

Also hard to believe, is the truculence of the Noughts when it comes to Callum’s relationship with Sephy. Assuredly, many members of a subordinate group give lip service to opposing interracial relationships. In actuality, they demonstrate little agency in actually trying to prevent or destroy them. The privilege of the more powerful incentivizes them to prevent or dismantle mixed relationships. Noughts + Crosses gives the impression both sides equally oppose.

Along the same vein, the scorn and vitriol Callum’s entrance into Albion’s most elite, almost entirely Cross, military academy occasions from Noughts is baffling. Attending an elite institution where the most powerful predominate can be seen as compromising but usually seen as incremental progress, isn’t normally met with overt resistance.

The danger that Callum and Sephy apparently are in is both over and underplayed. We are told repeatedly how dangerous this interracial romance is. However it isn’t dramatized. Neither is the typical systemic, violent hyper-protection of ruling class women from the gaze of males of the subordinate group.

Noughts + Crosses is very obviously asking us to examine racism and the system of white supremacy but fails to do it in the nuanced way such a subject demands and fails to even hint at any of the answers. However the lush production is thought-provoking, something that can’t be said of the majority of TV fare. That, in combination with captivating world-building, and solid acting all-around, make it worth checking out.