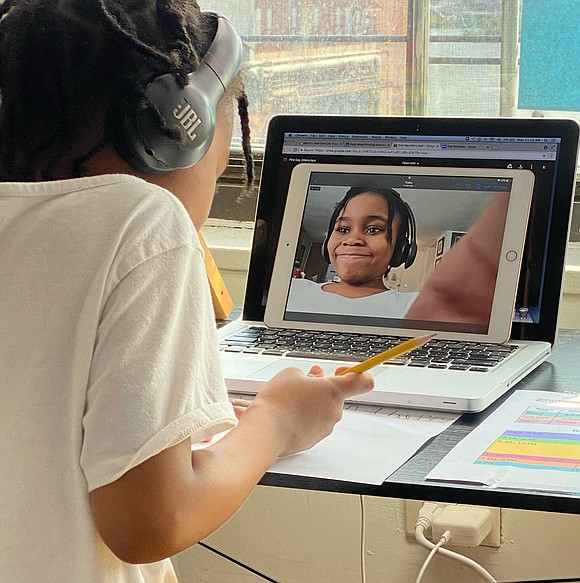 “So to be honest, the girls are actually doing well with it,” said Tamika Hall to the AmNews. “It was pull and tug in the a.m. on the first day but they are doing pretty good so far. Their schedules flow and they are busy up until the end at 2 p.m. We are having some tech issues but thanks to my computer knowledge, I put on my IT hat to troubleshoot.”

Hall began remote-learning classes with her kids this week after months of work amid tragedy. Now it’s finally here and she’s ready to bear the fruits of her labor.

On Monday, Sept. 14, teachers at P.S. 63 on the Lower East Side marched and protested against the reopening of schools claiming that the building, which is shared by both The Neighborhood School and STAR Academy, isn’t suitable for any classes during COVID-19. During inspections however, the city officials said the facility was ventilated enough for classes to begin.

As for now, Hall’s children are working with the devices distributed by the Department of Education. That might not last long. On Wednesday, Sept. 23 she told the AmNews that she’ll have to spend more money to ensure her children’s education goes off without a hitch.

“The DOE device that my youngest daughter has is not working well for us,” Hall said. “The security issues and the various logins make it difficult to navigate. I will be buying her a Chromebook today.”

In the weeks leading up to the first day of school Hall was seen shopping at IKEA for L-shaped desks, she eventually settled for Wayfair products. She was still setting up accounts and laptops with the necessary apps and tools for her children’s classes while the mayor was fighting with the teachers’ union (United Federation of Teachers) over when to start in-person classes. This week, pre-K and special education students started classes as part of a staggered schedule the city implemented after UFT officials threatened to strike. Hall told the AmNews that her kids were excited about home schooling, but “they don’t want to deal with screen time.” Because of that, Hall is continuing to carry out the usual routine for getting her kids ready for school. However, instead of leaving home, they’re walking to a desk.

No matter the end result, Tamika’s mother couldn’t be more proud of her.

“I’m very impressed with Tamika’s setting up for the girls school year,” said Yvonne Hall. “She worked very hard putting together desk and chairs so it’s a more comfortable and school-like setting. She’s making a menu for the week and preparing their lunch so the girls can pick up their food and eat without a waiting period. Tamika has 3 girls with different lessons and study habits and her plan is to have all their supplies in place and ready for this school’s learning.”

This year has been a hard one for Hall. Her aunt, Virginia Rountree, 89, died of COVID at St. John’s Episcopal Hospital in Far Rockaway. And just over a week later, her father Wesley Hall, 68, died of gastric cancer.

“I still haven’t had a gathering for my father’s funeral yet…” Hall told the AmNews.

During all of this, Hall made the decision to do remote learning with her children for the 2020-21 school year as problems continue to arise for New York Mayor Bill de Blasio and Schools Chancellor Richard Carranza’ s hybrid-learning plan.

De Blasio and Carranza’s plan for the 2020-21 school year involved staggering days children could attend school to comply with social distancing measures, participate in remote learning for the days they’re not in school and around the clock disinfection of areas used by students and faculty and staff. The plan would also designate a section of the school as a quarantine area if the student demonstrates any symptoms for the coronavirus.

Earlier this month, 55 out of 17,000 school staff employees tested positive for the coronavirus. All of the staff members that tested positive had been inside school buildings to prepare for the hybrid-learning year. Officials at the New York City Department of Education said that 42% of all public school students in the five boroughs have requested full remote learning. Some teachers agree.

In a petition making its way around the internet members of the Movement of Rank and File Educators, a wing of the United Federation of Teachers caucus, said that delaying school re-opening is just delaying the eventual health crisis that would be the result of students going inside physical school buildings. They’ve called for full remote learning.

“When Mayor de Blasio finally closed school buildings in mid-March, the virus had already spiraled out of control, and by the end of the pandemic’s first wave, our city lost more than 23,000 people,” read the petition. “Tragically, at least 74 of those who died were UFT members employed by the Department of Education. We do not know how many non-UFT represented DOE employees or charter employees perished. To this day, there has been no accountability for the missteps of the city: missteps which led to many avoidable deaths and an extreme crisis of trust.”

The latest DOE’s ventilation reports found that 96% of classrooms inspected had good and functioning ventilation systems, but 2,882 still needed repairs. But according to U.S. Congresswoman Alexandria Ocasio-Cortez, said school openings should be delayed not only until they’re declared completely safe to come back to, but also received the necessary funding from the state.

Rep. Ocasio-Cortez released a statement advocating for additional school funding, as schools begin to re-open despite parent and teacher concerns around COVID-19 safety protocols and staffing in many of our cities schools.

“After hearing from parents and school staff across the district, it’s clear that there’s significant evidence to suggest that schools are not safe to re-open,” said Ocasio-Cortez. “Poorly ventilated and unsanitized classrooms, ambiguous or ineffective health screening, COVID testing and contact tracing protocols and severe staffing shortages, on top of COVID cases in at least 55 schools, all indicate we are not ready to re-open.

“In June, the mayor pushed for a budget that cut more than $700M from schools, but cut almost nothing meaningful from NYPD,” continued Ocasio-Cortez. “The state still owes NYC schools $3.9B in Foundation Aid funding. We are in this situation because we have balanced our budgets on the backs of students for decades.”

The chaos behind the mayor and schools chancellor plan demonstrates to Hall that she made the right decision.

“At the end of the day, in my opinion, the city doesn’t care about the teachers or the students,” said Hall. “Where is the harm in running a remote program until majority of the safety issues are resolved? Earlier this summer, restaurants weren’t safe for indoor dining in NYC but schools were? The mixed messaging weighed heavily on my decision to keep my girls home, despite the hardship it creates for me.”

Hall in the middle of teaching her kids and avoiding the coronavirus, is still working as a full-time marketing director. In a year when diseases and infections have taken away some of her family members, a year in which she had to move her mother in with her to protect her from possible infection during a global pandemic, a year in which she decided to chooses remote learning for her kids, Hall said the city needed leadership from City Hall. She feels like she, and the rest of the city, didn’t get it.

“The mayor’s leadership was questionable long before this pandemic process,” Hall said. “This pandemic only reinforced that he is not the best fit for the job. I was not a fan of Cuomo either but he won me over a little with some of his decision-making when it comes to this pandemic situation, a whole.”