Steve McQueen’s ‘Lovers Rock’ takes us back in time 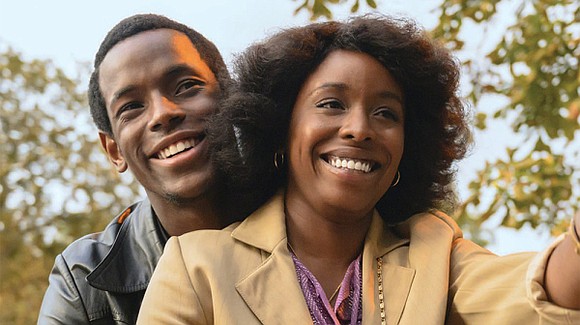 In one of the most electrifying scenes, McQueen transports the viewer back in time, to a London house party circa 1980. Everything about this party is seductive, every room alive with the pulsating music that lays bare the revelers’ West Indian roots. Even the air is grooving.

The details are exquisite, especially the costumes.

The men, in their rasta hats, lean against the wall inhaling joints, turning the dance floor into a smoky dream. These men are searching for women to dance, tugging them by the arm, a ritual that has its own hypnotic power. Then the music cuts through, reggae classics that moved through the U.K. in the ’70s.

Enraptured by the music, dancers cuddle up to one another, slow dancing, moving together in music laced foreplay. Driven by music, beautiful Black bodies swaying, the party-goers push the level of the party high, high, higher until it erupts —bringing “church” in every movement. Surely, the Holiest of Ghosts ran through this party.

“Lovers Rock” opened the 2020 New York Film Festival and is part of “Small Axe: A Collection of Five Films,” an anthology of dramas about the Black British experience from the ’60s to the ’80s that McQueen (“12 Years a Slave,” “Widows”) directed for BBC One and Amazon Studios.

“Lovers Rock” is the only one of the five that’s not based on a true story, but it is clear that the film is from McQueen’s memory. Voyeuristic? Yes, but delightfully voyeuristic. Voyeuristic in the best way—driven by reggae, unleashed.

McQueen takes us through a time machine back to London’s subculture packed to the brim with people of color who weren’t allowed to go to white dance clubs. The creativity and ingenuity of our people is staggering. Restricted, what do they do? They create their own. “Lovers Rock” takes place in one afternoon. DJ Samson (Kadeem Ramsay) and his crew prepare for the party by removing the couch (plastic, still on it) and rolling up the rugs so they can set up their giant homemade speakers in the living room. In the kitchen, you can almost smell the delicious West Indian food the women are cooking to sell later: curry goat, ackee and saltfish.

The people arrive slowly with each person breathing life into the party. As they linger, the drama builds.

The camera is like air, hovering and lingering, matching its movement to the music which moves, smoothly, from songs like “Kung Fu Fighting” to the romantic classics.

Voyeurism here is a beautiful thing; we must look carefully or we will miss something subtle happening between the film’s central characters. The teenage Martha (Amarah-Jae St Aubyn), in her silver ruffled dress, is a born-and-bred middle-class Britisher with Jamaican roots and wears that fact like a flag wrapped around her curvaceous body.

She starts the films sneaking out of the house because her parents, devout Christians, would never allow her to attend the party. Later she meets up with her friend Patty (Shaniqua Okwok). At the party, Patty has a problem connecting but Martha meets Franklyn (Micheal Ward), dressed-to-impress in his party shirt. The birthday girl Cindy (Ellis George), dressed perfectly in her body-hugging scarlet dress, connects with the charismatic Bammy (Daniel Francis-Swaby), dressed-to-impress, but underneath he’s more a lion than a lamb.

Steve McQueen’s “Lovers Rock” is “church,” capturing lightning in a bottle, and in that bottle, an era immortalized by memories that linger like your favorite song.