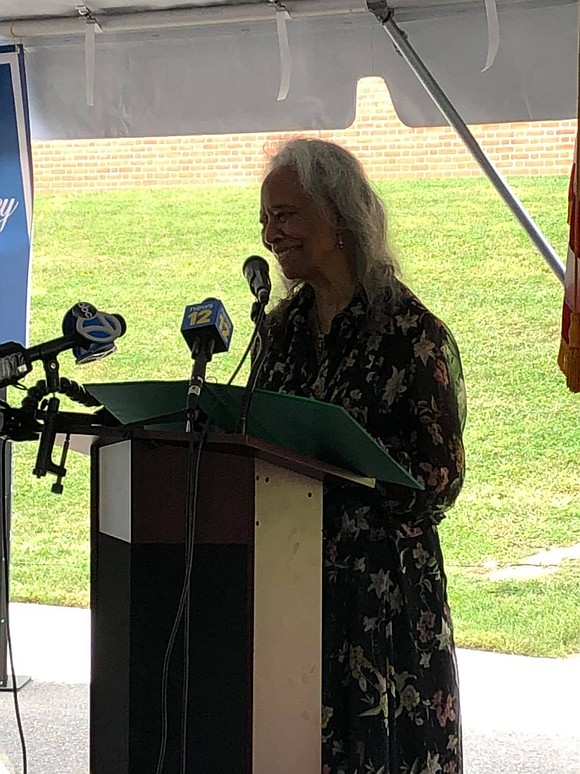 Longtime Teaneck resident, Theodora Smiley Lacey, is best known for helping organize the Montgomery Bus Boycott in 1955 and integrating schools in New Jersey. Last week a local school was renamed after the 88-year-old civil rights legend in her beloved community.

During an outdoor ceremony, local elected and school officials along with family and friends attended the renaming celebration where the building formerly known as “Eugene Field” became the “Theodora Smiley Lacey School.”

In March, the Teaneck School Board unanimously approved a resolution to rename the school during the 2020-2021 school year. The newly renovated Theodora Smiley Lacey School will house nine kindergarten classrooms serving around 180 students.

The school is the first in the township named after an African American.

Lacey was born in Montgomery, Alabama and was a childhood friend of Rosa Parks. She is a graduate of Alabama State University where she majored in education and became a science teacher. Lacey earned a master’s degree from Hunter College and taught school for 37 years until her retirement in 2007.

Her family moved to New York in the late 1950s, and Lacey eventually moved to Teaneck, New Jersey in 1961. She became a well-known civil rights activist and played a role in getting voting rights and fair housing for Black citizens and helped integrate schools in New Jersey. Township residents know her as “The First Lady of Teaneck.”

“Do what we all learned the first day of school,” Lacey said during the renaming ceremony. “Stand in line. Play fair. Don’t hit. Clean up your mess. Don’t take things. Say you’re sorry. Live a balanced life. If we all followed these rules, what a difference we could make.”

Renovations to the school included new walls, floor tiling, bathrooms, electrical, plumbing, heating and refrigeration. A new elevator was also built in the school along with HVAC units.

“Now young people, kindergarten students who come into our district and see who she is [will] know that she is somebody who lived and walked in their shoes, literally,” said Teaneck Superintendent Dr. Christopher Irving in one report.